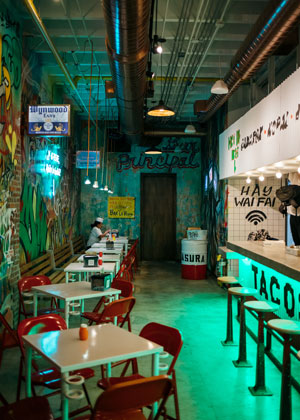 Julian Hakim, co-owner of The Taco Stand, discusses how he and his partner Aram Baloyan brought their San Diego-based breakfast, lunch and dinner concept to the East Coast.

rd+d: Who was the designer you worked with on the project?

JH: Ximena Estadella, who is known for combining imagination and creativity to develop unique spaces across Europe and the United States, designed The Miami location. The development and build-out process took about 15 months.

rd+d: What was the overall design concept for the space?

JH: The space is reminiscent to the taco stands of Tijuana and the Baja Peninsula. Design is well thought out, but relaxed and inspired by Mexican street fare. 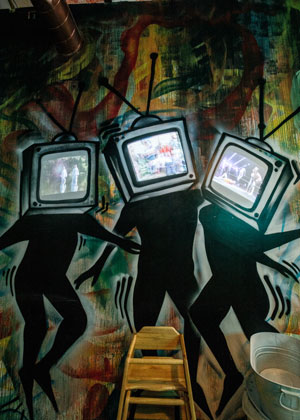 rd+d: What is the layout of the space?

JH: The space is very open with the kitchen and fast-order counter located at the center of the restaurant. Bar seating surrounds the kitchen with direct views of handmade tortillas being made and al pastor pork being trimmed straight from the vertical spit. Hidden behind the restaurant’s back doors is an eight-seat omakase sushi bar called Hiden. In this 450-square-foot space, there is an L-shaped, eight-seat, blonde wood sushi counter of sorts where Chef Tadashi Shiraishi presents fine-dining Japanese dishes.

rd+d: What are some other design aspects throughout the space?

JH: One side of Taco Stand features full floor-to-ceiling windows, providing views of the bustling Wynwood Art District, with the remaining walls covered in artwork, neon lights and our signature hand painted menu boards on corrugated aluminum. Similar to its California counterparts, The Taco Stand Miami’s color scheme is green, white and red to represent the Mexican flag. Design elements include hand-painted menu boards on corrugated aluminum, vibrant tile work and walls covered with custom murals, paintings of luchadores and neon lights. Our furniture is casual and industrial looking, while keeping with the green, red and white color scheme. In addition, the walls at this location are covered with Mexican paintings, portraits and neon lights. On our largest wall, we commissioned renowned Cuban artist Rigo Leon to create a custom mural inside the restaurant, which features a multi-dimensional piece, giving the space some Miami flavor inspired by Mexico, and staying true to Wynwood’s street art roots. Adjacent to that wall are painted stick figures with TV heads projecting Mexican cartoons all day long. 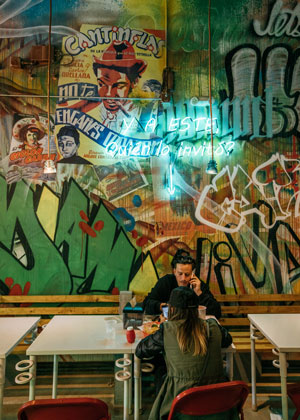 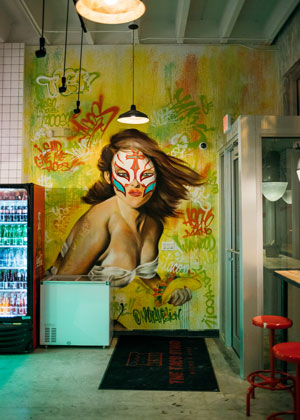