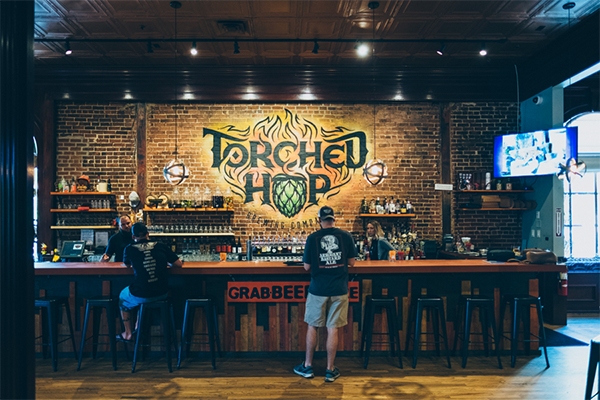 Brewing beer is a dream job for a lot of people – the explosion of the craft beer market in recent years provides plenty of proof of that.

Brothers Chris and Stephen Bivins took their own brewing dreams and created a Brewpub filled with activity, energy and plenty of ways for guests to entertain themselves. 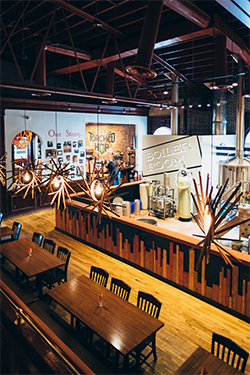 Their operation, Torched Hop Brewing Co. in Atlanta, opened its doors last spring in a space that was previously occupied by The Old Spaghetti Factory restaurant but had stood empty for six years.

“We walked in and they only had one light that was working but there was natural light coming in from outside. The space was absolutely amazing — all the woodwork they’d put into it, the vast, open space. It was pretty much meant to be a brewery. We knew right away that this was the spot we wanted to be in,” says Stephen Bivins.

There was work to be done on the space, however. While beautiful, the millwork made the place darker and more formal than the brothers preferred. They had the flooring stained to a lighter shade. They also introduced a color scheme that livened the place up, with plenty of reds, oranges and yellows, the colors of a flame.

Adding bright colors was just one step Torched Hop took to increase the energy level in the space. The company’s brewing line, a relatively small 10-barrel system, is in the front of the house. Only a half-height wall with a red-stained concrete drink rail separates it from guests. “A lot of places hide [their brewery equipment] behind doors or mask them in the back. For us it’s front and center. You can watch people brew during dinner. It’s dinner and a show,” says Bivins.

Our bocce ball court is always 75 and sunny. #burgermonday

Watching the brewers at work isn’t the only thing for guests to do at Torched Hop. The place is filled with things to do: darts, shuffleboard, video games, and giant Jenga are all there for the entertainment of guests — and even employees. “I’m down here seven days a week, so I want to be in a place that I’m having a good time as well,” says Bivins.

One of these activities takes full advantage of the restaurant’s layout. Torched Hop’s footprint has three levels. The surface level is home to the bar and brewery operation and the top to the dining room. The operation uses the bottom level as home to an indoor bocce ball court. “It’s an absolute blast on the weekend, people just yelling and having a good time,” says Bivins. 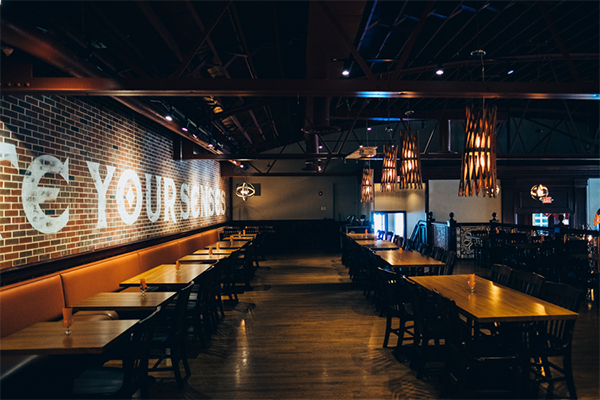 The upstairs dining room, meanwhile, is more traditional, with hardwood tables, wooden chairs and a large orange upholstered banquette. Even in this more traditional area, the energy of Torched Hop comes through. A brick wall is covered with the phrase “Ignite Your Senses” (another play on the fire theme) while fun custom-made light fixtures — with an unusual backstory — hang from the ceiling. “All of our light fixtures are made out of old wine barrels and whiskey barrels. There’s a guy out in California that does that kind of work and we went with him,” says Bivins.