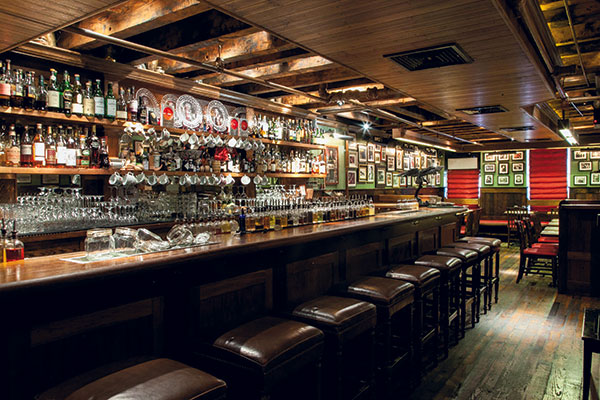 A Q&A with Jack McGarry, owner of The Dead Rabbit Grocery and Grog

The five-star Merchant Hotel in Belfast, Northern Ireland, received a wealth of accolades when Jack McGarry and his business partner Sean Muldoon worked there. The pair landed in New York City in 2010 with nothing but their suitcases, McGarry recalls. But soon, they established The Dead Rabbit, a bar divided into three distinct floors — each with its own bar. The first floor is an Irish workingman’s pub, the second is a classic cocktail bar and the third is a private event space. It is one of the most-awarded drinking establishments, including World’s Best Bar in 2015 and 2016.

What was the inspiration behind The Dead Rabbit?

JM: We feel Irish pubs have been damaged by poor operators, and we’re seeking to re-engage our consumers and reframe their misconceptions by giving that Irish hospitality with world-class product and overall experience.

We remembered the craft cocktail bar at the Merchant Hotel where we had worked and the workingman’s Irish pub, The Duke of York, that we drank in as soon as we finished work. We thought, “Why not bring those two things together in the same place?”

But we knew to do it right, it had to be believable — in other words, there had to be something linking the cocktail bar to the pub. We knew that Jerry Thomas published the first cocktail book in New York in 1862 and also knew that the Great Potato Famine occurred in Ireland from 1845-1851 and that a million Irish immigrants landed at the Port of New York during that time. So there was a bit of a connection in that.

The Dead Rabbits were an Irish New York gang featured in the film “Gangs of New York.” The more we read about it, the more fascinated about the gang and the era we became. So we decided to call the bar after the gang, but the whole reason for doing so was because we wanted to create a workingman’s pub and a high-end cocktail lounge in the same place and for it all to make sense.

What notable finishes and fixtures were used in construction and decor?

JM: The woodwork really sings at The Dead Rabbit; it’s all black American walnut, and all of the three bars have varying elements of it. Another significant piece in the Taproom is the mural we commissioned of Louis Lang’s 1862 painting “Return of the 69th (Irish) Regiment,” depicting Thomas Meagher’s arrival at Bowling Green after a tour of duty.

In the Taproom, we’ve also got Henry’s Corner, dedicated to our departed friend Henry Besant, who greatly shaped our vision for what The Dead Rabbit should be. He died four weeks before we opened and didn’t get the chance to experience it, so we decided to honor him with his own space. It means a lot to myself and Sean.

Another piece I’d highlight would be the ceremonial battle cross from “Gangs of New York” that actor Liam Neeson donated to the bar. It hangs on the stairs going from our Parlor to the Occasional. The walls of Dead Rabbit are rich with stories.

The Dead Rabbit is divided into three floors, each with its own bar. Could you describe them?

JM: The Dead Rabbit is housed in a brownstone dating back to 1828. Of the five floors and basement, three floors are operational, with a total capacity of 180. There is around 2,400 square feet of consumer operational space with the rest dedicated to kitchens, prep and storage.

On the first floor is the Taproom with a 35-foot bar with a turn as the main feature. It is representative of a standing-room bar that would have been prevalent in the immigrant/Irish pubs of the 19th century that our narrative celebrates. The backbar shelf extends the whole length of the room to house our collection of 190 Irish whiskeys. Another significant decor/aesthetic piece is the grocery retail section at the back of the Taproom, representative of the groceries and groggeries of Ireland and the U.S. during the 18th and 19th centuries. Our ceilings are covered with hundreds of images from a North Belfast magazine called Horizon. It’s all to reinforce the Irishness and comfortability of our space.

On the second floor is the Parlor, a much more intimate setting with seating-only lunch service during the day and sophisticated cocktail service at night. Here, artwork celebrates famous contemporary Irish figures in the arts and sports. The lighting and color scheme ensure this is a sumptuous and romantic space. In terms of bar design functionality, we have a centerpiece bar dominated with two stations and hundreds of cheater bottles to produce our vast array of cocktails. This space is all about the mixed drink. While the Taproom is our nod to Irish whiskey and Irish pubs, the Parlor is our cathedral of cocktails.

On the third floor is a special-events space called the Occasional Room. The decor pieces are representative of our travels to Irish pubs in Ireland. On display are prints of the illustrative artwork commissioned for previous cocktail menus, a charcoal reproduction of Daniel Day Lewis’ Bill the Butcher character in “Gangs of New York” and many other smaller pieces. There are no TVs in any of the rooms, so we make sure we've provided plenty of distractions in other formats, with decor being a big part of that.

What constitutes a great bar?

JM: We look at our bar designs at a macro level. A lot of operators get too focused on what they do — great cocktails, great food, great wine, great beer, etc. Not enough operators focus on their why. With no clearly identified why, how can you articulate your beliefs that inform your behaviors (your hows), which result in your whats? When it comes to bar design, I’d say a clear sense of purpose is the single most important factor.

What do you see as current trends?

JM: Currently, we’re seeing a substantial increase in venues focusing on storytelling as part of their conceptual identity — themed bars offering themed menus by a themed staff. This is all to make noise and connect in a saturated marketplace. Some do it really well, and others come across as Disneyland. Also, I’m beginning to see bars earmarking sustainability as part of their core identify. A few reputable bars in London are doing this, and it’s now starting to surface here.

How do bars get stuck into categories?

JM: Operators allow themselves to be pigeonholed, I believe. The Dead Rabbit and BlackTail have both been pigeonholed. We look at that as an opportunity to recalibrate without diluting our narrative. For example, at The Dead Rabbit, we would be pigeonholed as that place to go for classic, tome-styled cocktail menus. Once we knew this, we had our design team come up with a new angle, and we refocused on contemporary-styled cocktails delivered in a graphic comic-styled cocktail menu. The cornerstones are the same — celebrating Irishness, world-class design, pushing the agenda — but the delivery is altogether different. You have to constantly reinvent yourself.