Through a partnership with its new franchisee, Midfield Concession Enterprises (MCE-DIA LLC), the new full-service restaurants are expected to open at DEN airport in late 2016 and early 2017. They will occupy the 3,573 and 2,317 square foot spaces on concourses B and C that currently house Lefty’s Mile High Bar and Grill, and Lefty’s Front Range Grill.

Both locations will feature a full bar and a breakfast menu, in addition to Smashburger’s traditional lunch and dinner offerings. They will also feature a full bar with 10 beers on tap, including a selection of local craft beers from Colorado breweries and a variety of hand-crafted cocktails.

The Denver Expansion is just part of the chain’s commitment to expand in more non-traditional spaces like airports as well as college campuses and casinos. Smashburger operates 10 airport locations across the globe with several additional restaurants expected to open soon. Most recently, Smashburger announced plans to open new casino locations this year.

Smashburger will open a 112-seat restaurant at Harrah’s Laughlin in Las Vegas this spring, making it the first fast-casual restaurant on that property. In the fall, Smashburger will open at the Rio All-Suite Hotel & Casino Las Vegas. This unit will seat 68 guests and feature an updated restaurant design that includes a new façade cladding system with wood planks to brighten up the restaurant, according to the chain. The chain operates two casino locations: Caesar’s Palace Las Vegas and the Choctaw Casino Resort in Durant, Okla.

In addition to some design changes, Smashburger also adapted the menu for its casino locations to offer more variety, quality and convenience to casino diners, including adding breakfast options. Aside from burgers, the casino menus will also offer grilled or crispy chicken sandwiches, entrée salads, a selection of premium sides, and a variety of craft beers. 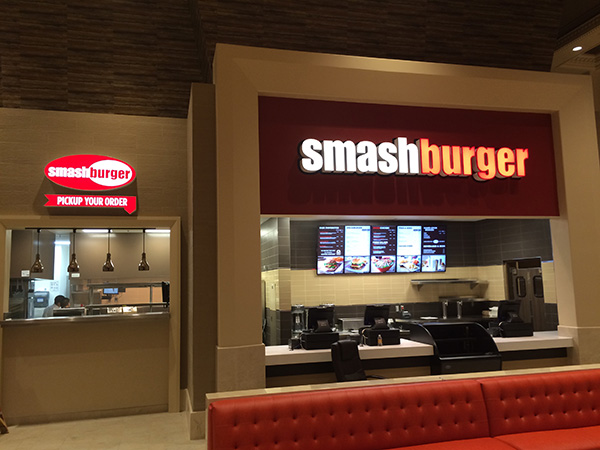