Most of the time, drinking beer is — or at least should be — a communal activity, done with family, friends, co-workers or even just the person you happen to sit next to at the bar. When high demand led Michigan-based Arcadia Brewing Company to build a new brewery and headquarters in Kalamazoo, it decided to open a bar/restaurant in the same facility, one that fully embraces drinking beer — and eating good barbecue — with the people around you.

The design of the building itself encourages this sort of interaction, said Arcadia president and founder Tim Surprise. The facility has high ceilings and sweeping views of the Kalamazoo River. This gives the space energy and drama. At the same time, the design does not dominate. Other elements were kept intentionally simple and low key, to allow the customers themselves to provide color and be the focus of the restaurant. To that end, the restaurant features minimal wall decorations, consisting primarily of sound-dampening panels with images of Arcadia's beer labels and food art on the custom made chalk menu boards; and a color pallet of mostly muted tones. 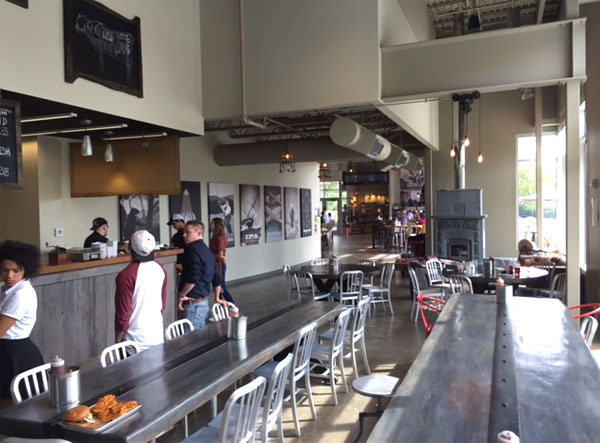 The space features simple materials that reinforce the authenticity of Arcadia’s craft beer, Surprise noted. This includes a grinded concrete floor with exposed aggregate and some furnishings made of wood reclaimed from the old Kalamazoo City Hall.

The style of these furnishings draws people together. All tables, for instance are community style, with seating for 10 to 12 people and drink rails throughout the restaurant provide other areas for groups to come together.

The restaurant’s combination fireplace/oven serves as another gathering spot and key design element.

The unit sits near a glass wall overlooking the Kalamazoo River. The fact that comfy couches and easy chairs surround the fireplace/oven makes it a natural gathering place, particularly during the cold Michigan winters. 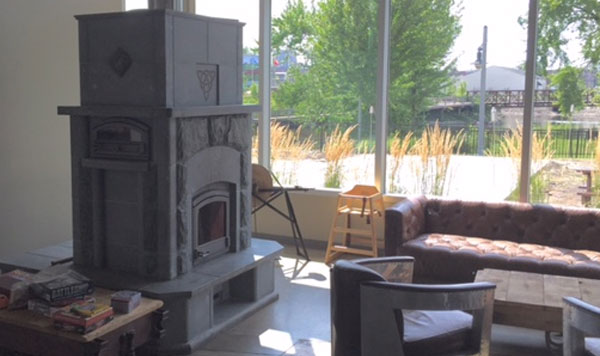 The fireplace/oven serves as a natural gathering place in Arcadia’s new restaurant.

To truly be a standout piece in the restaurant, extra attention was given to the look of this unit, said Doug Hren, owner of Masonry Heater Design House, the distributor that Arcadia worked with on this oven. “We had to do something with the veneer to give it style and presence,” he said.

For extra branding, the unit features a soapstone facade that has the Arcadia logo carved into it and a custom stone bench built into the piece, which adds even more seating to the space.

As a fireplace/oven combo, the unit has a separate chamber that can be used for cooking. While this feature hasn’t been utilized much to date, Surprise said he is considering cooking items like flatbreads and pizzas in the unit. It could even be used to smoke meats. 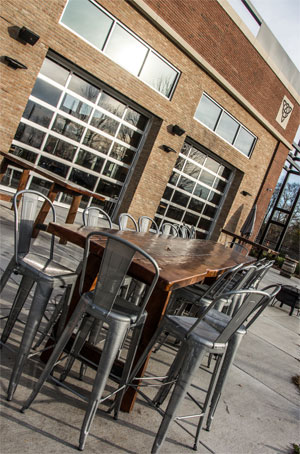 Arcadia’s patio serves as a popular Kalamazoo gathering spot during the summer months.

Three large garage doors that open to a patio area and provide fresh air to the restaurant serves as another key design element for this project. Like the fireplace as a gathering spot in the winter, this patio area is popular during the summer months.

Such features, said Surprise, really do provide a natural way for the people of Kalamazoo to come together.

“We’re at the crossroads of four of the city’s neighborhoods,” he said. “We wanted to give people the opportunity to sit with others they haven’t met yet.”