Friends since grade school, Karim Webb, who grew up in a family of McDonald’s franchisees, and Edward Barnett, a finance-industry professional, joined forces in 2006 to become Buffalo Wild Wings franchisees. 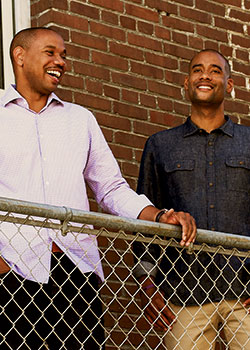 Barnett (left) and Webb are Buffalo Wild Wings franchisees. Photos by Greg ShappellAt the time, the concept had minimal presence in Southern California, but Webb had come across it elsewhere and got excited about bringing it to Los Angeles. The duo opened their first restaurant in 2009 and have since taken over a formerly company-owned unit. They’ve also developed a third in a challenged inner-city South Los Angeles neighborhood long shunned by full-service chains. They’ve since become sales leaders in the BWW system and champions of change in the communities where they operate.

rd+d: Karim, you come from a family of McDonald’s franchisees. How was your experience different when you set out to establish your own business as a Buffalo Wild Wings franchisee?

KW: McDonald’s has its own real estate development department, so you get
locations where leases have already been done or they purchase the land they know they’re going to build on. You get to come in and make a few basic choices. But site selection, dealing with brokers, lease negotiations, managing contractors and change orders, value engineering, permitting – those things typically aren’t part of your experience as a McDonald’s franchisee. They’re also not necessarily core competencies of most restaurant operators, so we’ve had to learn every step of the way.

rd+d: What was the real estate situation like when you began to search for locations?

EB: In 2008 everything had crashed and it was a renter’s market. The bigger challenge was educating landlords about the brand and convincing them to go with us. At the time, BWW had very little presence in Southern California – just a couple of units – so unless they were national landlords, most weren’t familiar with the brand. It has grown exponentially since then, but landlords at the time were looking for brands they knew and trusted. We had to caravan to a unit 50 miles east of L.A. so they could do a walk through and get a feel for it.

rd+d: One of your sites, on Crenshaw Boulevard in Baldwin Hills, opened in 2011 in what has been one of the most troubled inner-city neighborhoods in Los Angeles, if not the country. What made you comfortable developing there?

KW: It does have a reputation for violence and crime, and that’s a challenge. Today, within two square miles of that unit live some of the wealthiest African Americans and some of the most impoverished. Nonetheless, when people find out you’re on Crenshaw in South L.A. they still have this image of the Rodney King riots, gang violence, racial tensions, etc. They don’t feel safe or confident that they’re going to get quality food and service. But Ed and I both grew up in the area; we have family there and are very familiar with it. There’s a level of comfort and pride that comes with operating there and a lot of opportunity to positively impact the community. It’s not like at our other, more suburban mall locations where there are probably 20 other casual-dining restaurants right nearby. At Crenshaw, there’s a bigger spotlight on us and we can make a bigger difference as an employer and member of the community.

rd+d: But you were also realistic about the challenges. What was key to addressing some of the toughest of those challenges?

KW: One of the biggest considerations was whether we felt comfortable that the unit could be secured. When we decided to go into that location we immediately began looking for a very “community-connected” security company that had relationships with police, community leaders and even with some of the gang elements in the area. We didn’t want a run-of-the-mill mall security firm; we needed someone with expertise in dealing with inner-city security issues in as positive a way as possible, someone who would treat people with respect. We also wanted large people, literally – very physically imposing security people. It was part of our conditional use permit agreement with the police and the city that we would employ security at the restaurant the majority of time it’s open. I think that’s a big part of why we’ve been so successful there. 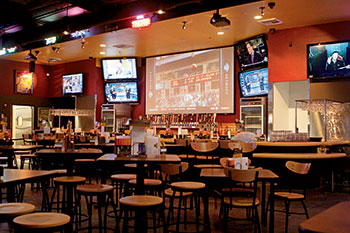 We’re also very involved in the community. Before we opened, we went out and talked to community groups to let them know who we are, what we’re about and why it makes sense for us to be their neighbor. And we’ve stayed involved. Ed and I both teach entrepreneurship classes at local high schools; Ed is on several boards of nonprofits that do great work in and around South L.A. I do the same and serve as board chair of a prominent community college here.

rd+d: Is securing financing tougher for inner-city locations than elsewhere?

EB: Not really. It just takes a bit more work, depending on who you’re dealing with and what their guidelines are. The bigger issue for us was simply the Crenshaw Boulevard address. We really needed to paint a clear picture of what’s actually there, what the challenges are and how we planned to address them. We had to make them understand why we wanted to do business in the inner city and that we could execute. Once you accomplish that, it’s all about the numbers just like anyplace else.

rd+d: Your numbers, including at Crenshaw, show some of the strongest growth in the BWW system. Are your three units fairly equal in terms of profitability?

KW: No. At the Crenshaw location the high cost of security definitely impacts profitability. Plus, in neighborhoods like that, where you’re dealing with a population that has less disposable income, you get a little more pressure on costs. There tend to be more comps given away and there’s more demand for discounted items, so the average checks are a bit lower. Those are all things that impact your profitability.

rd+d: You’ve proven that developing in the inner city can be a win-win. Any advice you’d share with other restaurant chains that might be considering following your lead?

KW: First off, I’d advise against trying to develop only in the inner city, because the reality is that you’re likely to be financially less competitive. The pressure on margins is greater than in other markets. But, if you have the capacity to do it and are comfortable there, it needs to be done and there’s money to be made.

EB: Making the effort to have a strong connection with the community is critical. Sometimes businesses try to just import themselves into the inner city; they don’t hire people from the community, don’t help the community, they just have a take, take, take attitude. Obviously, you have certain business objectives but you have to balance the community’s interests with your own. When you do that, people will support you and you can have a positive impact.

rd+d: What’s next for PCF? Will you continue to develop more restaurants?

KW: From a business standpoint we’re always looking to grow. We’re finalizing a multi-store commitment with Buffalo Wild Wings for the North Los Angeles market. Hopefully, in either Q4 of this year or Q1 of next we’ll be opening our next unit. We’re also looking at various other concepts and considering what we might be able to add to the boat to continue to grow and develop the PCF restaurant brand.