How to Manage Restaurant Openings

When a new restaurant opens, it is a time for celebration. Like any kind of significant event, an opening takes preplanning. Restaurant chains that open a number of units each year have developed best practices for what could be called the countdown-to-opening period. While the key elements are similar — punch lists, marketing, training — the specific focus and timing can be quite different, depending on the chain’s corporate mission and brand promise.

Three growth chains — Culver’s, Schlotzsky’s and Fresh to Order — shared their countdown-to-opening philosophies with rd+d. There are lessons to be learned from each, lessons about paying attention to the company’s corporate philosophy and executing accordingly.

No matter the opening strategy followed, success is in the details. Asked for advice for owners anticipating store openings, Steve Karls of Culver’s says, “Don’t assume anything and measure, measure, measure. Be sure to get the right people, they are the biggest opportunity you have. You only get to open once, so do it right.” 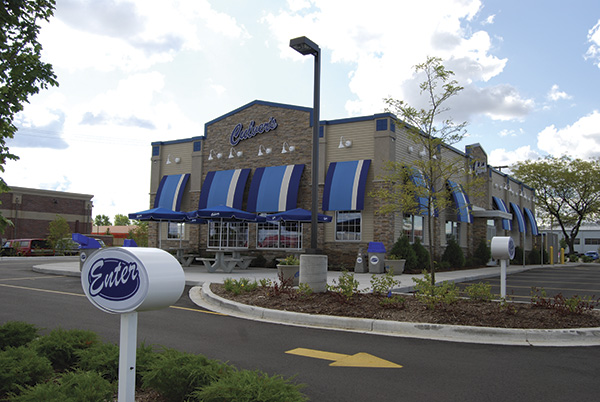 Culver’s opening ceremonies usually include a local official to celebrate the restaurant’s entrance into the community.New Culver’s units have two opportunities for celebration: groundbreaking and VIP openings. Both are benchmark events and one or the other is always attended by Craig Culver, co-founder, CEO and face of the family business. A groundbreaking ceremony takes place during the construction period and is significant, as it signals a countdown to the actual opening. Prior to this event, the franchisees of the new unit work with development and construction teams and the building starts to take shape. After the groundbreaking ceremony, the operations team steps in and starts working toward the opening.

Steve Karls, director of development for Culver’s, says that, with the experience of 528 units under its belt, the company has a pretty solid template for making sure it accomplishes each key point prior to opening day. Culver’s opened 34 units in 2014 and expects to open 30 to 35 this year.

One of the key points in preparing for an opening, Karls says, is manager development. New managers go through eight weeks of training, either in a neighboring restaurant or another unit owned by the franchisee. A manager returns to his or her new store a couple of weeks prior to opening to ensure that all the last-minute details are accomplished. A week out, Culver’s training team arrives to train back-of-the-house and front-of-the-house staff. The training team also returns post opening to conduct cross-training.

New owners go through a training process prior to the groundbreaking. While they are still getting permits and working with the local officials, they receive 16 weeks of training. Twelve weeks are spent in the classroom and on in-store training. Most important to the success of the opening is the experience of two two-week periods spent supporting the openings of other Culver’s units. “They get to see firsthand what it takes to open a restaurant,” Karls says.

Completion of construction and the planning by the operations team happens concurrently. From the time of the groundbreaking, it takes about 90 days to accomplish everything before the opening. Culver’s recommends that their franchisees have soft openings so they can handle the volume of the first few days. Usually, once the owners have gone through four weeks of supporting two openings, they agree. As opening time approaches, Culver’s development team meets more frequently with the unit’s leadership team to ensure successful execution of all the key steps.

When the construction team completes its role, and when the punch list is complete, operations oversees the training and stocking of the kitchen. Once staff has been trained for five days, the sixth day is set as VIP day. While there may be a ribbon cutting by a city official, the day is primarily for the team’s family members to come in by shifts to enjoy a meal on Culver’s.

Franchisees have access to a corporate system called Grass Roots PR to help them generate press releases that can be sent to local media. A library of templates can be downloaded and tailored for use with the goal of building a professional relationship between the owner and the media. 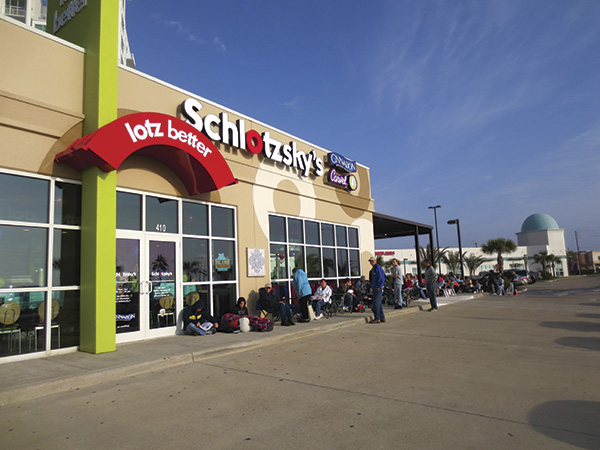 Schlotzsky’s follows a 52-week countdown-to-opening schedule. The first 100 customers get free sandwiches for a year.Schlotzsky’s, the bakery-café-deli chain based in Austin, Texas, is in growth mode. Nick Paruch, director of development, was brought in to help manage that growth. From the birth of new units to the ribbon cuttings, he and his team work closely with franchisees to ensure success. There are more than 350 units operating globally now, with 30 to 35 slated to open this year.

Paruch says the company follows a 52-week countdown schedule from site location through design, bidding, permitting and, finally, construction. Actual construction may take eight weeks, on average, to complete. During this process, usually about four to six weeks before the expected completion, marketing starts planning the opening. “They have to order marketing materials and set up the opening event,” he says. Schlotzsky’s likes to get the local chamber of commerce involved, with a city official slated to cut the ribbon on opening day.

The development team monitors progress on a weekly basis through a detailed checklist. From experience, the team has worked through the bugs and created best practices. Timing is critical, Paruch says. For instance, if it takes five weeks to manufacture a piece of equipment, the plan needs to allow for that contingency.

During construction, the project manager takes weekly photos and sends them to Paruch to keep track of details and identify anything that needs to be corrected. Paruch and his team also visit the sites frequently to be sure that everything is being executed according to plan. While there is a corporate prototype, Paruch says each new unit is tailored to the site. “We want it to have the Schlotzsky’s feel,” he says. “But we don’t want it to be a cookie cutter look.”

Once the certificate of occupancy is obtained from the health department and the building inspector has given his or her okay, the preparation is handed over to the operations team. Now, it is time for training. Seasoned employees are brought in to help train the staff that will be operating the new unit. Training takes around three days.

By this time, marketing has completed its planning and is ready to execute. Schlotzsky’s strategy is to hold a soft opening, by invitation only, for family and friends prior to the big day. This is followed by the grand opening, with festivities ranging from ribbon cuttings to specials. This year, the company is offering the first 100 people at the opening free Schlotzsky’s for a year.

Paruch says, “Even after we’ve turned over the site to operations, we stay with them on a day-to-day basis to solve any issues that may arise.” They go through a post-opening punch list and talk with franchisees about any improvements needed, changes that need to be made or equipment that is not working properly. He says that on-site visits prior to the opening result in fewer surprises at the end. 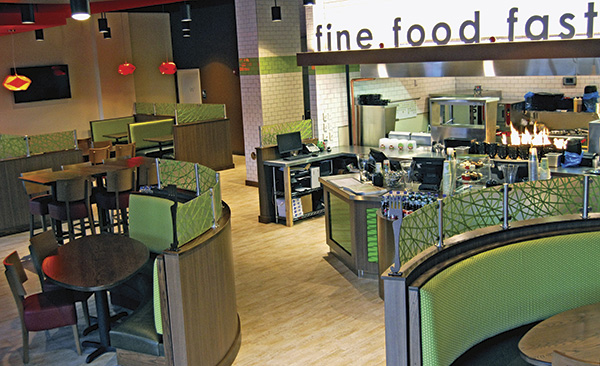 Fresh to Order uses both an opening team and a training team to support franchisees through the store opening process.“We definitely have a very distinct philosophy on openings,” says Pierre Panos, founder and CEO of QSA (Quality Service America). QSA is the fourth largest franchisee of Papa John’s pizza restaurants, with 41 units. Panos is also co-owner of Brookwood Grill, a fine-dining establishment in Roswell, Ga., and the founder of Fresh to Order (f2o), a fast-casual chain established in 2006. QSA is opening f2os at a rate of 8 to 10 each year, with a goal of 50 stores by 2016. The stores are all located in the extended Southeast, from Washington, D.C., south to Florida and west to Dallas.

“We’re very clear on how we do openings and we have a very similar plan for every single one of our restaurants,” Panos says. He doesn’t believe in having a “grand” opening. All of his openings are soft. “We don’t do big marketing in the area. We don’t do big mayor ribbon-cutting events.”

He explains that he has a very simple philosophy: the first three months determine the next three years of sales, so everything has to be perfect when the unit opens. He believes that, when chains do a lot of pre-marketing and open with a “big bang,” they are likely to get overwhelmed in terms of operations. They may get large sales initially but these are not necessarily sustained over the next several years.

Panos’ primary concern is delivering on the brand promise. To ensure this, QSA uses both an opening team and a training team to support franchisees through the process of getting their stores open. The opening team arrives at a new unit one week prior to opening and stays for four weeks after. The team works both in the front and the back of the house, helping to guarantee that everything is executed perfectly. The marketing team is also available to support the franchisees’ sales-building and brand-awareness initiatives.

The key behind his philosophy is making sure that everything from a construction standpoint is completed before the opening day. If every detail is not checked off the punch list, the opening is delayed.

Once the construction team has completed every detail and handed the reins to operations, the training team comes in for a 7- to 10-day session. The training team, separate from the opening team, is based in Atlanta and conducts six-week training programs there. A new-opening training team now goes to each unit a week before the opening and remains for two weeks after the opening to support the franchisee.

The idea of a soft opening is sometimes a challenge for entrepreneurial franchisees, Panos says. Some tend to want the “big bang” approach. He will allow them to do this but counsels them against it. “It’s a fine line to keep them motivated,” he says. “But we want to help them follow the system from a corporate perspective.” In fact, Panos uses the entire up-front franchisee fee for the preparation for opening the store.