A Year of Challenges and Changes in the Restaurant Industry


While 2020 was marked by what felt like an endless string of events unprecedented in modern memory, 2021 was the year the pandemic settled in, and everyone attempted to grapple with what that would mean. COVID-19, the rise of social distancing, and masking left some people anxiously adjusting everything in their lives. For others, it meant defiantly adjusting absolutely nothing. For most everyone else in the middle, the pandemic meant trying to find a balance between the two poles, at times teetering back and forth to get to what normal life would look like in a post-pandemic world.

At rd+d, grappling to find the balance meant launching a yearlong-research project in the hopes of helping readers benchmark their experiences and see if their intuitions were in line with that of their peers. Starting in December 2020 rd+d distributed email surveys roughly every two months to qualified subscribers to take the temperature of an industry that was wrestling with major public health concerns, employee health and safety, frustrated consumers, fast-changing local regulations, labor shortages, supply chain crunches, and a tectonic shift to outdoor and off-premises dining.

The mix of questions — some of which were asked repeatedly during the year — sought to provide context for the readers of rd+d as everyone faced yet another unprecedented year in the hospitality industry and the world at large. 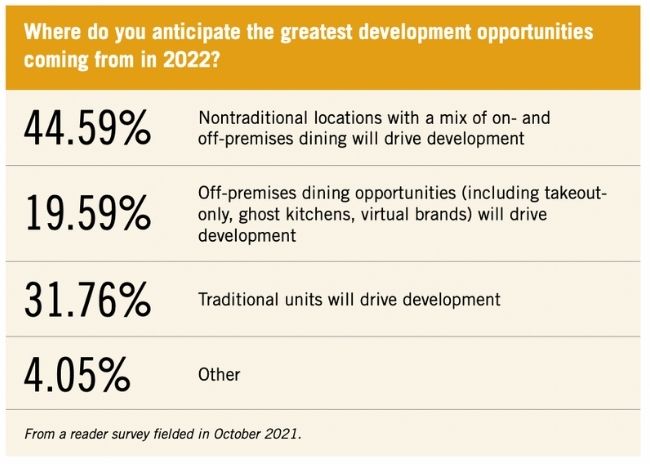 By April 2021 outdoor dining was still leading operator investments, according to 36.36% of rd+d readers, but reinvesting in interiors and on-site dining came in strong with 28.18% of readers. Upgrading and investing in all areas of the off-premises dining experience came in at 19.09%. Drive-thrus and walk-up windows totaled 11.82% of operator investments.

We fielded a version of this question again in August with similar results: Where have you seen the most operator investment in 2021 so far? Outdoor dining topped the list at 46.52%, sanitation theater elements came in at 17.65%, drive-thru upgrades was third at 14.97% and walk-up windows was fourth at 8.56%.

A Year of Challenges

Staying on top of overall fast-moving trends was another significant challenge for 20.42% of readers in December 2020, placing second in the overall list of challenges. This challenge faded over the course of the year, too. By April it was a top concern for just 13.95% of respondents. By October, staying on top of fast-moving trends was the biggest concern for just 6.67% of readers surveyed, coming in dead last in their list of current challenges.

By October, the biggest challenge facing readers was rising labor and materials costs at 40.89%. Staffing had already started to crop up in the April survey with nearly 20% of readers noting the labor shortage was a growing challenge. 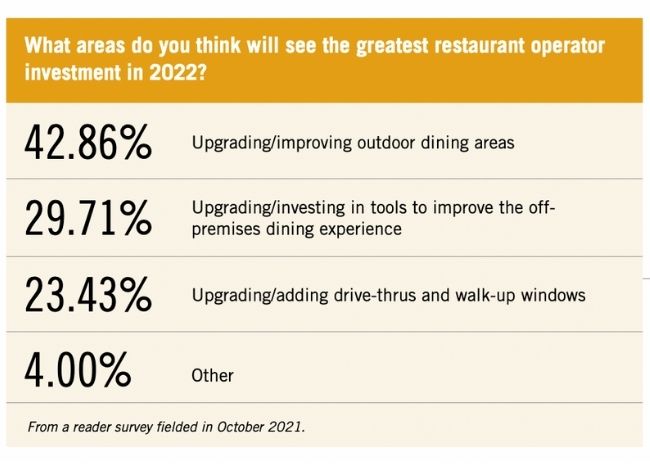 In the February 2021 survey, 62.5% of restaurant designers surveyed said they were developing designs that took pandemic factors such as social distancing and improved/expanded outdoor dining spaces into account. By August that number remained fairly steady with 59.72% of readers saying they took pandemic factors into account while designing new restaurants. In February, only 16.07% said they were developing designs as if COVID-19 was behind us and no longer a factor but that number had risen to 25% by August.

Some respondents felt the need to clarify and provide nuance. The feedback offered both in February and August offered a mix of responses with one key theme: flexibility. “We’re taking pandemic measures into account but not in a way that will make it necessary to remodel when pandemic regulations are over,” said one. Another noted that they had to be flexible but that there’s a “big emphasis on outdoor spaces and takeout” that wasn’t a focus before. 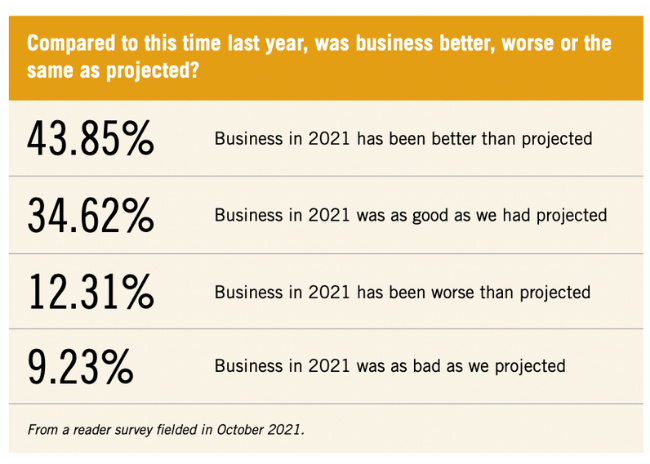 With the rise of sanitation theater and fear of germs and disease heightened among consumers, 28.57% of readers surveyed said they planned to include touchless technologies in restrooms. Touchless ordering and payment came in a close second with 25.71% of survey respondents choosing this option. Touchless doors and entryways came in third place at 21.43% and QR codes for menus was fourth with 20.36% of survey respondents saying they plan to include those in their future restaurant plans.

One respondent added that “supply chain issues are affecting a portion of our projects, but only in the sense that schedules are being rearranged to accommodate the shortage or lack of an item. A larger concern holding up projects is the lack of help that our vendors, like ourselves, are suffering from.” 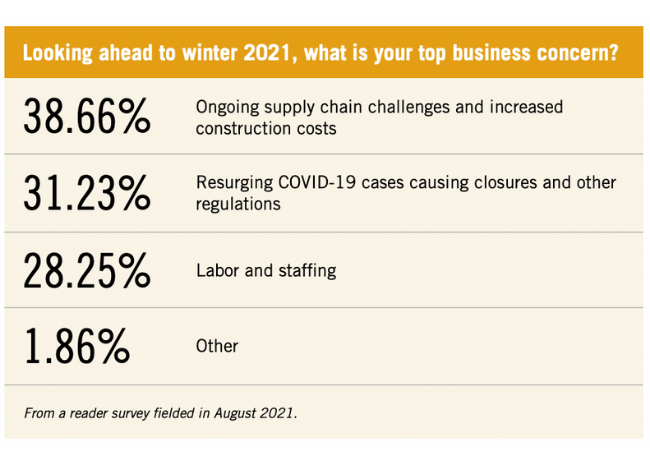 In a survey fielded in October 2021, rd+d asked readers to look ahead to identify where they anticipate the greatest development opportunities coming from in 2022. Nontraditional locations that offer a mix of on- and off-premises dining was the answer for 44.59% of readers. However, 31.76% of readers said that traditional units will drive development in 2022. Finally, 19.59% of readers felt that locations with a focus on off-premises dining (such as ghost kitchens and virtual brands) would offer them their greatest development opportunities in 2022.

In the same October survey, we asked readers in what areas do they expect to see the greatest operator investment in 2022 and upgrading/improving outdoor dining areas was the clear favorite as 42.86% of respondents chose this option. Trailing a distant second with 29.71% of readers was upgrading and investing in tools to improve the off-premises dining experience. Finally, 23.43% of readers felt that upgrading/adding drive-thrus and walk-up windows would be where operators put their investment dollars in 2022.

In terms of aesthetic trends, 42.48% of readers said biophilic design — bringing the natural world inside — was moving the needle in their pitches and projects as of October 2021. Bright colors and bold statement designs came in second with 30.07% of readers surveyed. Coming in third with 15.03% of readers was luxurious, immersive and glamorous designs. These answers and percentages were statistically unchanged from a survey of rd+d readers fielded in February 2021. 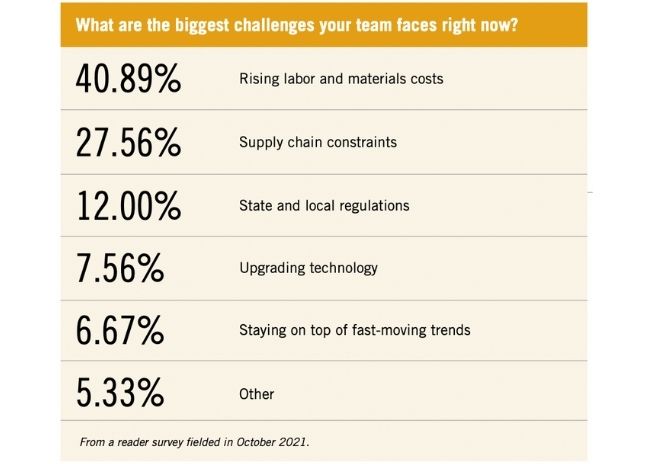 In a survey fielded in December of last year, 40.85% of rd+d readers said outdoor dining dominated operator investments in 2020.

In April, rd+d asked where readers had seen the greatest investment by operators in 2021 so far. Outdoor dining was the number one answer, totaling 36.36% of readers. We asked that question again in August, and the percent of readers who said outdoor dining had dominated operator investment in 2021 jumped to 46.52%.