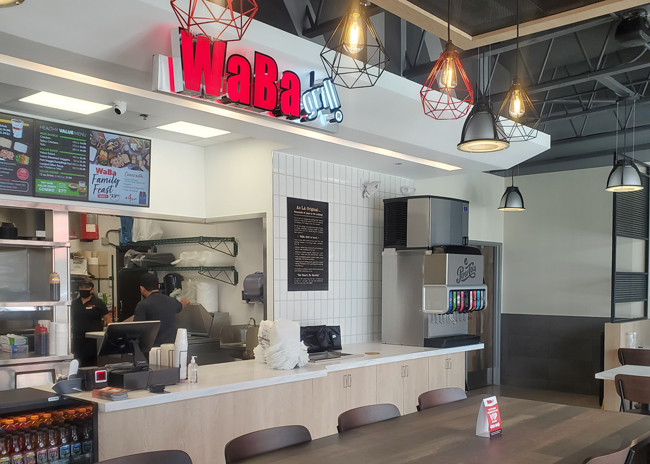 Based in the Los Angeles-area, WaBa Grill features healthful rice bowls with a tilt toward Asian/Latin fusion. The chain, which is approaching 200 locations, rolled out a new prototype last summer. The space is designed to highlight the quality of its food while adjusting operations for off-premises, online ordering and third-party delivery.

To help drive home the quality of its food, the chain has complementary wall decor on opposite walls. One space, dubbed the protein wall, has pictures of flames with stamp-like illustrations touting WaBa’s “Fresh Never Frozen Chicken” and “Wild Caught Salmon.” 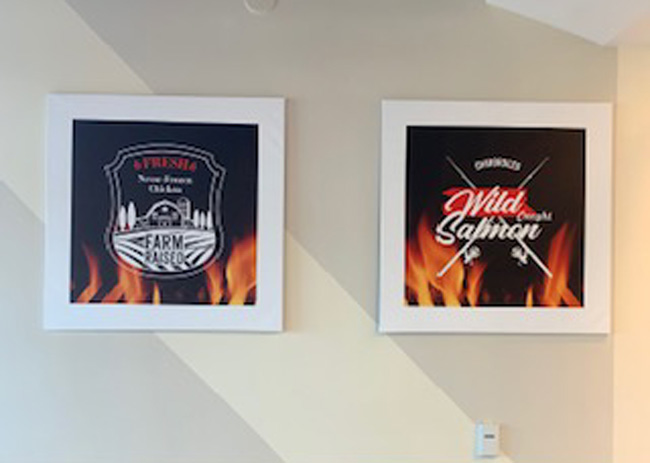 The opposite wall pushes the concepts’ “Eat Smart, Be Healthy” brand premise. Pieces above a banquette feature illustrations and phrases that tout the quality of WaBa’s food and the benefits of healthful eating.

Though it’s wasn’t rolled out in WaBa’s first restaurants with the new design, these will be accompanied by signage above the POS counter touting WaBa’s cooking techniques: “Grilled,” “Steamed,” “Charbroiled,” and “No Microwaves, No Fryers.”

Together, these elements encapsulate the WaBa value proposition. “Those are the three aspects of what makes WaBa unique,” says Mark Finnegan, WaBa’s vice president of Marketing and Technology. “What we do to our proteins, how we select our cooking methodologies and our commitment to making sure that it's a place where you can eat smart and be healthier than you can at other options out there.” 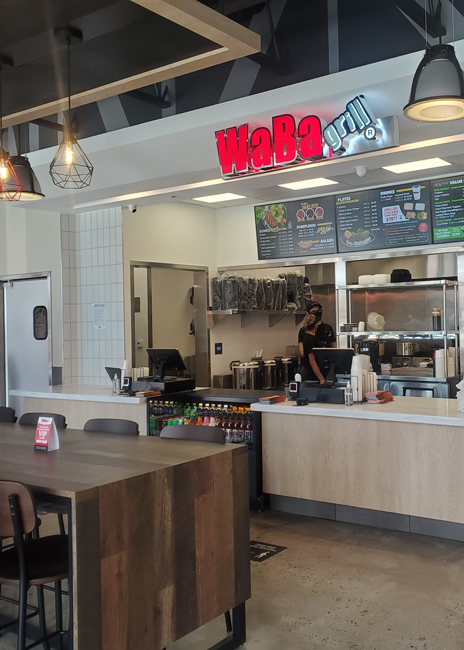 In the previous design, people picking up food to go had to queue in the ordering line. Given the volume of such orders and the likelihood of having several orders ready at once, the chain has added shelving behind the counter for staging to-go meals. It has also expanded its counter space to facilitate pickups.

Guests and delivery drivers picking up such an order can now queue around the counterspace to the side of registers. This, says Finnegan, allows WaBa to serve both to-go and dine-in customers more efficiently.

The POS area also saw a menu board change, going from static to electronic. Not only does this allow WaBa to tout LTOs but it also lets the chain adjust based on daypart.

“To the extent that we have customers who use online ordering and will at times come into the store, the dinner daypart just has different points of emphasis [than lunch]. We wanted the flexibility to daypart our menu,” Finnegan says. 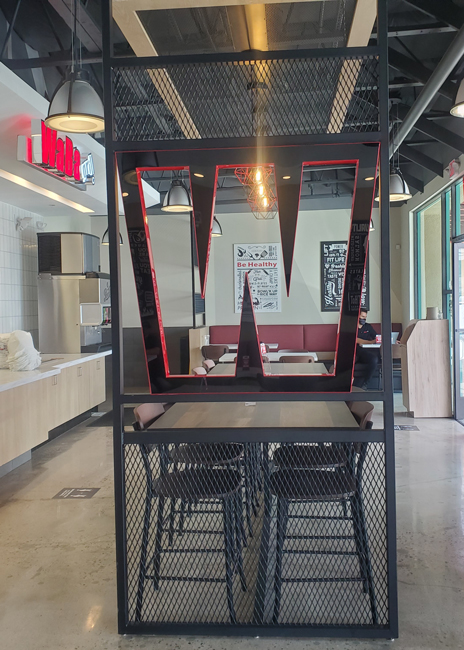 For the dining area, WaBa has been judicious in its expenditures for this new design. According to Finnegan, the chain found that some elements didn’t require anything high-end. Simple light fixtures, polished concrete floors and an open ceiling were employed.

Other elements, the chain invested in. “We interviewed a lot of customers about what is and isn't important to them in a restaurant,” Finnegan says. “Customers like a good surface to eat on and like a good, clean countertop when they’re getting their food. Those are quartz. That's one of the areas where we are spending a little bit more money.”

The chain also invested in a custom-made “W” design element that’s built into its community table. The grating surrounding the “W” is just one of several design nods to the different grill marks that can be found on WaBa’s proteins, Finnegan notes.

The community table itself, he added, remains a popular seating area, even in an age of social distancing. This table, made with a wood veneer, is set off with a cloud element and light fixtures shaped like flames.

These fixtures, Finnegan adds, are two separate pieces: A basic LED combined with a metal piece shaped like a flame. “We take a basic fixture and dress it up. It's much more cost-effective than buying a complete fixture.”