How to Negotiate Restaurant Leases in a Tough Market 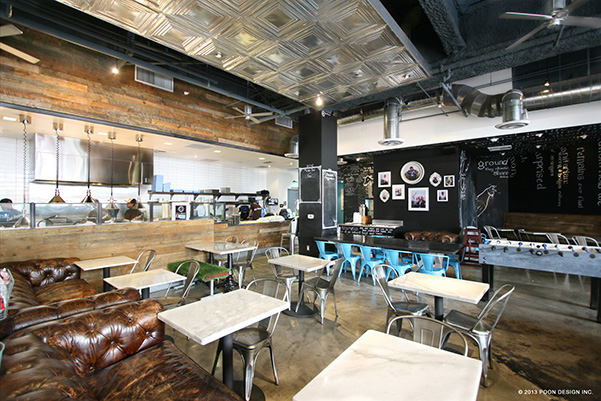 There’s not much good to report about the current real estate environment for multi-unit restaurant companies. Top sites remain scarce and many rivals continue to bid on them. New shopping center construction, the source of growth for years, hasn’t made much of a comeback. As a result, occupancy costs have shot up for second- and -third generation sites that are often in questionable condition.

It’s a market in which having a knowledgeable, strategic and firm approach to lease negotiations can make all the difference in the world.

To discover how growth-oriented chains deal with these problems, rd+d asked two development executives, one from a large chain and the other representing an emerging brand, to explain the strategies their companies employ to secure favorable sites and leases. Unfortunately, “favorable”doesn’t always tip toward the chains. Landlords, both execs acknowledge, rule the rent roost with demand finally outstripping supply. So anything favorable usually rolls to the landlords’ side of the table.

Even so, Corner Bakery Cafe’s Mike Nolan and Reid Tussing of Mendocino Farms Sandwich Market have lately experienced success. Here they share answers to questions about how to negotiate for desirable sites under challenging conditions. Their advice and tips for getting the best deal possible should give you a cost-saving chance with landlords — as long as you’re not bidding against these two pros for the same space.

As chief development officer for Panera Bread Co. for 11 years, Mike Nolan oversaw the opening of 1,400 units. He joined Corner Bakery Café in May and is now managing another rapid franchise and company-store rollout, only in a very different real estate environment. 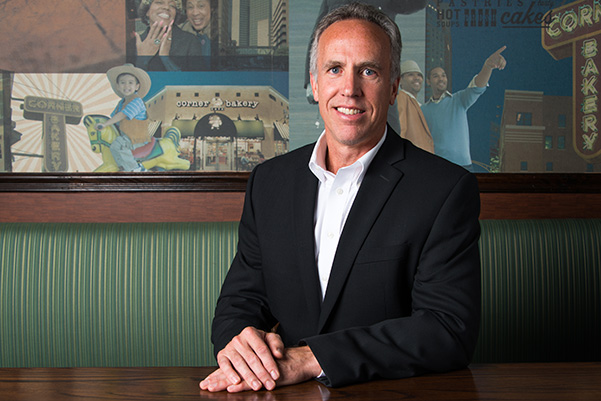 MN: For growth companies — whether franchised or not — it’s the remaining doldrums on the shopping center development side. There’s very little new space coming on the market. That, in turn, creates two problems. One is competition for space among retailers and restaurant brands that are trying to grow. But there has also been a very big market increase in occupancy costs as a result of the scarcity of new space. New space has always been the great equalizer relative to moderating rent inflation.

rd+d: How long has this been the case?

MN: New-store development came to a grinding halt between 2008 and 2009. At the time, demand was falling faster than supply and rents remained favorable almost through 2012. Since then, there has been a resurgence of demand almost back to pre-recession levels. At the same time, supply has remained very low on new builds, starting with regional malls, power centers, grocery-anchored shopping centers, etc. The second problem that’s giving restaurant companies headaches is everything we are touching now is second- or third-generation space.

rd+d: What are the implications from a cost standpoint?

MN: First, let me say there were several things that were really attractive during the shopping-center development craze from the ‘90s to the recession. New shopping centers were the vehicles to grow rapidly, and the space came with an attractive finish-out package. Its delivery could be to our spec [because] if it was done as part of the construction, it was at no added cost to developers. New construction not only provided an abundance of space, it moderated inflation. That’s no longer the case.

MN: The restaurant space is capital intensive and often the deals are “as is.” An operating restaurant is a great example. Everyone knows the space is available, so everyone competes for it. Yet based on the fact that it has an existing lease and an occupant, no one can get in to do an inspection. When you finally demo it, you find the walls may be filled with mold and the sanitary line burst and now there’s a sink hole. So taking existing space means driving up the improvement investment [without] TI allowance because landlords are not flush with cash from new construction. You’ve taken the space “as is”, and now you’re going to fight with the landlord as to what the landlord’s responsibility is. 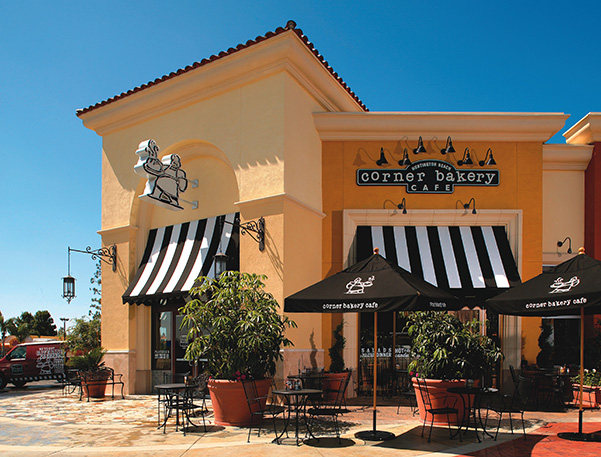 rd+d: Some see the Letter of Intent (LOI) as merely a form-letter document while others believe it’s where significant responsibilities should be negotiated ahead of the lease. What’s your take?

MN: Real negotiation is at the LOI stage, but some franchisees will go right to lease. They are in a hurry and believe the LOI doesn’t serve any purpose. Yet the LOI is a risk mitigation tool, and used properly it is hugely valuable in avoiding deals that will die later on. Equally important, it stops you from going forward on deals that make no economic sense, because you raise issues that are important.

rd+d: Let’s say you really like a space that’s nearly perfect. How much time are you going to spend on the LOI?

MN: It’s like buying a home you’ve fallen in love with. You walk out and forget to find out about a sewer assessment. The issue is to not get emotional. Our philosophy is to take all the things that are hard to negotiate in the lease and take the time needed to get them discussed at the LOI stage.

MN: Continuous operation, for example. The typical franchisee hasn’t thought about that in the context of the LOI. Once they’ve signed the lease, it requires them to operate the restaurant continuously throughout the life of the lease. Our LOI form includes guidelines for all the difficult items in the lease. For example, the LOI is broken into two pieces: the contractual component, which includes rent, square feet, and dimensions and the work letter, which is essentially a clear definition of who does the work and who pays for it. For instance, who takes the floor slab out if the site is an existing space? Or who pays for digging a 300-yard trench through a parking lot for a T1 phone line? California is huge on taxes. I’ve seen impact fees in very small communities as high as $175,000 to $250,000. It’s like buying a liquor license in New Jersey.

rd+d: How can chains avoid paying for such things?

MN: Our work letter runs 8 to 10 pages. It’s exhaustive and covers all utilities, storefront with 1-inch glass, patio construction, branding, awnings, x-amount of air-conditioning tonnage, demolition of existing space. It is not so much that we get everything we ask for but its scope covers costs and who’s responsible for paying for them. We negotiate a cold dark shell with allowance for HVAC, and so in existing space that means the landlord is doing a quite a bit of work to demo it back.

rd+d: Are some developers more amenable to negotiation?

MN: There’s motivation on the part of both parties to shift the burden. In today’s market with existing space, the landlord’s position is that you take the space “as is” and assume all risk. It becomes an issue of strength of negotiation, moving the deal toward more shared responsibility. 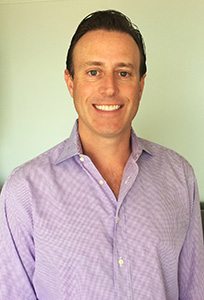 Reid Tussing signed on as Mendocino Farms’ vice president of development after years of brokering deals in downtown Los Angeles’ Central Business District. He first met founder and CEO Mario Del Pero in 1998, while representing Del Pero’s first eatery, Skews. Today, Tussing sits on other side of the table as he looks for sites for the private equity-backed Mendocino Farms.

rd+d: It’s no secret that finding good sites is becoming difficult in southern California. What’s been the impact on Mendocino Farms?

RT: Los Angeles is probably similar to other major metropolitan areas where it’s difficult to find quality restaurant space that’s 2,500 to 3,500 square feet. There has been an uptick in brands in LA, and other premium fast-casual operators that we’d like to be around often end up competing with us for space. You just don’t have a lot of land here. Also, Russo [Development] led the way that people view malls or retail centers, getting away from traditional strip centers with walkup stores. Now, it’s about green space, playgrounds and water features where people spend multiple hours whether shopping or relaxing. It’s difficult to reposition a lot of existing [shopping] centers so you have to find new land, which is harder to come by.

rd+d: So when it comes to grabbing share-of-stomach you have no problem with centers that are restaurant dense?

RT: The “we want to control everything” approach is an old-school mentality. We actually prefer to be around synergistic brands like Tender Greens, Chipotle and Starbucks. We want to be in lifestyle centers where people shop or just live their lives. But we want to protect our ground on premium sandwiches. 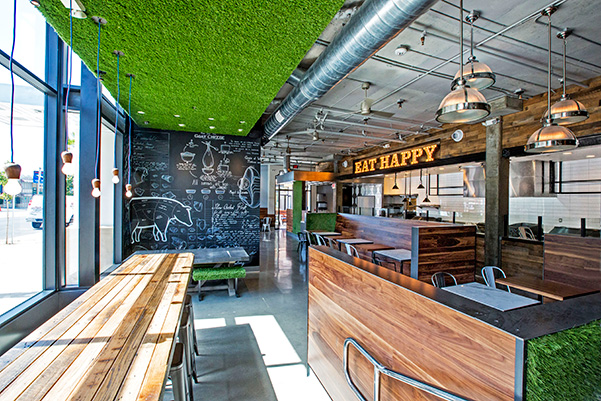 rd+d: Do you employ an exclusivity clause on your LOI?

RT: Yes. We can co-exist with other sandwich chains that target another customer, like Subway or Jimmy John’s. We know that customer is two different people on different days. So the type of center we are looking at determines how far we need to negotiate that point. Consider a large center like the one in Irvine, Calif., next to a university. There’s a strong population of younger kids. You can see how [the developers] want a lower price sandwich offering. We think exclusivity really depends on the center and demographics. We want the center as a whole to be successful. Being the only shining star in it doesn’t help us.

rd+d: Permitting, especially in California, is a major factor in slowing down restaurant openings. How do you stay on track and on time?

RT: We try to negotiate as much time as possible to do our due diligence, construction and design. Several cities are becoming more challenging in terms of turnaround as construction ramps up. Landlords are strict and there’s usually a four- to six-month period before rent commences. You really have to kick off design and start spending money before you have the lease done to make sure you hit the ground running. Yet it really depends on quality of space. Is it new development, a second-generation restaurant, retail space converting to a restaurant? Does the landlord have to do work? From the landlords’ perspective, they want to make sure they have a tenant that’s invested in the property and wants to get the doors open. That’s why they fight for parameters.

rd+d: Speaking of how much work the landlord will do, what condition do you want your space to be in?

RT: Nowadays we’re getting a warm shell. We want new HVAC and all utilities brought to the premises. We want the landlord to provide the storefront or credit our own storefront. The slab we get a credit for. As for impact or change-of-use fees, which can run into the hundreds of thousands of dollars, if you don’t negotiate them with the landlord before going to the city for permits, you will have to pay. We had an example in Santa Monica with changing a hair salon to a restaurant. There, the plumbing and sewer fees were based off existing fixtures that could have cost us tens of thousands if we hadn’t negotiated them. What brands need to focus on is the condition of the space the landlord is bringing to them. If they don’t do proper due diligence before signing the LOI they are opening themselves up to a whole set of issues.