Balance Pan-Asian Grille is Turning the Tide in Toledo 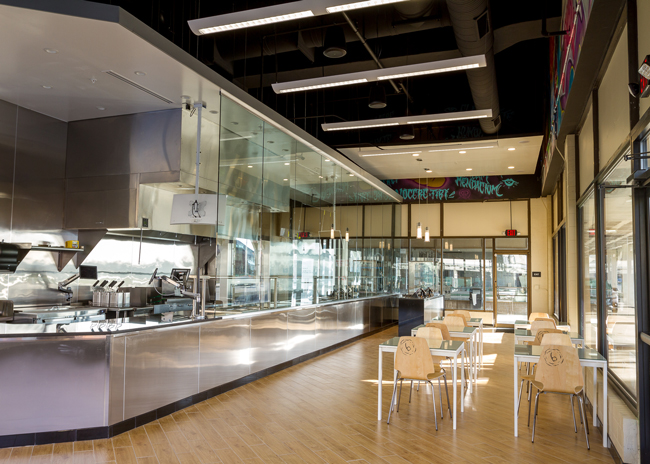 This concept is helping to revitalize downtown Toledo with a new restaurant and an indoor farm, both located in a formerly abandoned parking garage.

For decades, the downtowns of many U.S. cities, especially those in the Rust Belt, have been hollowed out, home to empty storefronts and not much else.

In recent years, though, many of these areas have been undergoing a revitalization. Driven by factors ranging from tax incentives to a desire for urban living, residents and businesses are coming back.

One city that’s seen a revitalization of its downtown is Toledo, Ohio, and one company that’s played a part in this revitalization is Balance Pan-Asian Grille, a fast-casual concept that opened its first location in 2010. 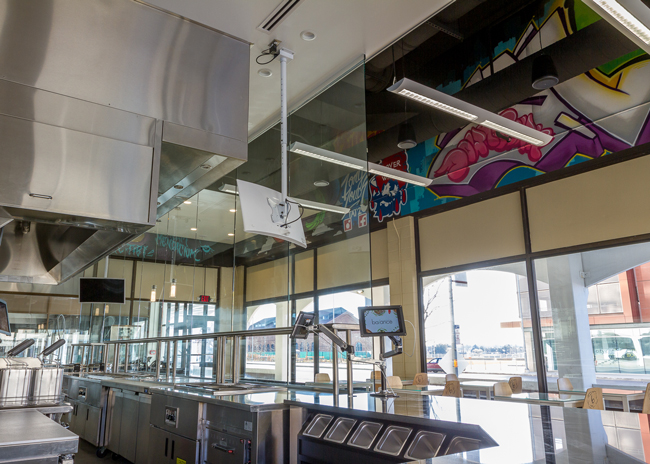 Balance has an intentionally clean, austere design, allowing the fresh food to stand out on the table. Images courtesy of Balance Pan-Asian Grille.

Balance is the brainchild of Prakash “PK” Karamchandani and his partner, HoChan Jang. A pair of Millennials with an unabashedly Millennial approach, the two wanted to start a restaurant that reshaped relationships.

“Everything we’re doing is really seeking to create a balance again, where employees don’t feel subjugated to serve others but are instead respected in the customer interaction a little bit more and paid like they are. Where customers understand what’s in their food and get a little bit of ownership and control back through transparency and knowledge, where we’re conscious about how we affect our environment. Everywhere we looked we were surrounded by the idea of balance, so we stuck with that name,” says Karamchandani.

This approach has worked well for the chain, which now has five locations, four in the Toledo area and one in Cleveland.

One of the chain’s most recent openings was in downtown Toledo, in a parking garage/retail space that stood empty for roughly 30 years. In November of 2018, Balance opened a restaurant with an evolved design, followed in April 2019 by an indoor urban farm that supplies produce to Balance as well as to local residents.

Karamchandani jokes that it would have been easier to have opened these operations in a new building. By moving into an existing structure, Balance is helping bring the downtown area back and maintain its unique character, he says. “We want to see downtown Toledo revitalized, not rebuilt. There’s a difference and there is a value to reclaiming what is there and making it better versus just mowing it down and starting over with half-assed construction and making it look cookie-cutter.” 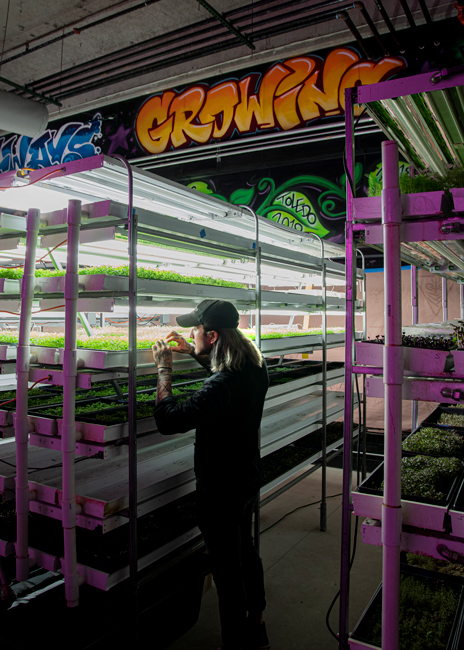 Balance's indoor farm, located across a walkway from the downtown Toledo restaurant, supplies produce to the restaurant as well as to local residents.Good motivations, though, don’t make a project easier. The challenges in creating this restaurant and urban farm in an abandoned building were numerous.

One major issue was the state of the building itself. Since the structure stood empty for decades it had no functioning gas or electric infrastructure. While there were some interior water lines, these had to be replaced, says Karamchandani, since they were low-pressure 1¼ lines. The sewage line to the street, meanwhile, had completely rotted out and had to be replaced all the way to the manhole.

Getting all this infrastructure designed and installed, then, became a major part of the project, far above and beyond what operators encounter in a typical restaurant build.

Related to this outdated or missing infrastructure was the permitting process. While getting permitted can cause headaches on any project, in this situation headaches turned into migraines.

First was the lack of records and schematics for the facility. The structure was built as a parking garage in 1957 and later modified to include retail space on the first floor.

The city of Toledo, though, only had records for that 1957, retail-free structure. “That meant [permitting authorities] treated everything to the latest building code. Nothing was grandfathered in,” says Karamchandani.

What’s more there were more permitting authorities involved in this process than in a normal restaurant project. In addition to those on the city and county level, the age of the building meant Balance needed approvals from the state office that oversees accessibility for the disabled along with government groups in charge of historical preservation.

That meant having to get multiple approvals for decisions that would typically get quick approvals. Balance’s open ceiling, for instance, needed to be approved by both the building department and historical preservation department.

On top of these extra approvals, there were cases where the directions and guidelines from different authorities clashed, with each group saying the other should bend.

In those cases, the key was to get everyone in the same room at the same time to hammer out an agreement. “You can’t leave any opening in which someone can point and say, ‘Oh, that’s not my problem, it’s this other person’s problem. Just get the fire official in there, and get the building person in there, and someone from the state [disabilities office], and the architect and engineer. Sometimes that sucks because you are coordinating seven people’s schedules, but that’s just what you have to do.”

Getting approvals for the indoor farm was even more complicated at times. While moving into a long-vacant building short-circuited the normal permitting process for the restaurant, there was simply no process for permitting such an urban farm.

The situation was made even worse, Karamchandani admits, by Balance releasing a video announcing plans for the farm without consulting health, building or any other departments in the Toledo area. The video went viral in the community and ended up ruffling some government feathers.

Eventually, though, these government agencies bought into the farm and even helped Balance secure funding for the project. “I didn’t ask, they offered, which was awesome. It speaks a lot to why Toledo is revitalizing. These government officials are not sitting back and letting it happen, they are actively pushing for this redevelopment.”

Even with the enthusiastic support of permitting bodies, the farm portion of the project was still incredibly complicated.

As an organic operation, keeping out insects was key to the farm’s design. The space was designed to be completely airtight, with floor to ceiling demising. The HVAC system, meanwhile, is triple filtered to keep out pests and maintain a clean environment for growing plants. Notably, the HVAC in such a space isn’t targeted toward temperature as much as maintaining plant-friendly humidity levels.

Electrical is another area where the engineering of such a space differs significantly from a restaurant. The electrical design makes use of several subpanels and zones that allow portions of the farm to be shut down in an emergency without impacting the entire operation. Electrical costs, meanwhile, are kept down by the use of LEDs set to emit only reds and greens, the only areas of the spectrum Balance’s plants need to grow.

Balance’s hard work on the farm paid off, with a full 50% of the farm’s produce going straight to Balance restaurants. The company sells the rest to outside parties, including local residents who subscribe to regular produce deliveries.

Not only does the farm support Balance restaurants as a vendor, it also plays into the experience of guests at the Downtown Toledo location.

Notably, the design of the downtown Toledo restaurant was an evolution of its previous stores. Balance’s first three locations, all in Toledo, were built on shoestring budgets, with flooring from Home Depot and furniture from Ikea, says Karamchandani. The success of those locations allowed Balance to invest in some commercial-grade materials and even go with custom solutions in many instances.

This starts with the chain’s kitchen, which is completely open. By putting its food prep and production on full display via a glass wall, the chain lives out its core value of transparency.

Being transparent doesn’t mean a space can’t look crisp, however. In this new design, Balance went custom for several pieces of kitchen equipment, specified everything at the same height and depth and added stainless-steel filler units. These changes make each line look like single units, resulting in a much cleaner aesthetic. They also make the job of kitchen staffers easier, allowing them to get food out more quickly, according to Karamchandani.

While the space has plenty of drama and theater thanks to the open kitchen, much of the rest of the design is simple and, to use Karamchandani’s word, austere. While the furnishings in this location are still consumer grade, flooring is a custom porcelain tile with a light-colored wood look. The restaurant’s point-of-sale counter, with a stainless-steel face and black granite top, is also custom.

“If you are going to be in the dining room, we want you to focus on the food, whether that be on the preparation or the cooking or the food right in front of you. The tables are white, so it creates a nice backdrop, and in the Instagram culture you definitely need that,” says Karamchandani.

While the design of this restaurant encourages guests to focus on the food, the whole place isn’t stark. In fact, Balance has added pops of color throughout the restaurant to help bring energy and draw attention to the elements the chain wants guests to notice.

Each store, for example, has a living wall, which reinforces the chains commitment to fresh, clean food.

There’s also the graffiti-style street art that runs along the top of the walls, contrasting with the windows and white spaces below. “We were trying to create a tie between the food, or philosophy that you should be eating clean, simple food but there is definitely an artistic component to what we serve. That’s where the graffiti comes in,” says Karamchandani.

The chain also uses electronic menu boards in place of static boards, allowing it to roll out system-wide updates to its seasonal menu at the push of a button. Balance also opted for 4K ultra-high-definition boards, which allow it to present high-quality food photography as well as show videos. 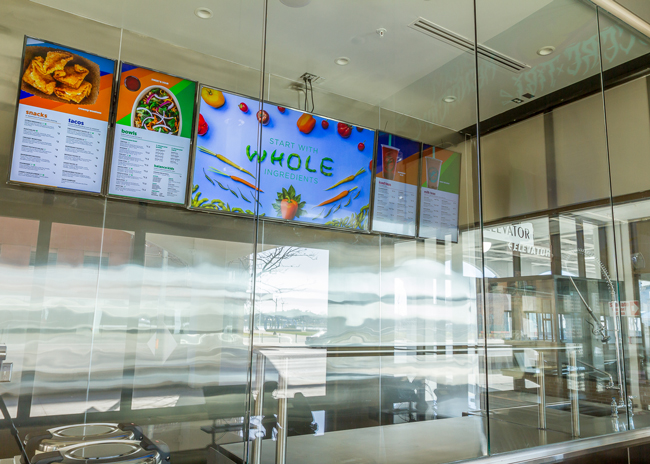 Balance's high-end digital menu boards not only allow it to update its seasonal menu, they also let the chain show video LTOs and other offerings/events.

The downtown Toledo design, Karamchandani notes, was only an evolution of the look Balance established for itself. Following the opening of this location, the chain rolled out a further evolution in its fifth restaurant, located in Cleveland. This retained the changes of the downtown Toledo restaurant while adding new touches.

The chain, for example, now uses all custom-made tables and chairs instead of Ikea items. In addition, previously used black granite at the POS and expo counters as well as at the base of the walls has been removed from the restaurant. Now, Balance uses a black powder-coated metal for the countertops and no black element at the base of the walls. “You do need a dark component because we have a lot of white in the space. I felt the way the contrast was applied would drag your eyes to the floor and the counters. it was much better off to be more subtle. We kept it in the legs of the tables and the framework of the millwork. That created a better tie from that metal to the clean stainless in the kitchen,” says Karamchandani.

While the Cleveland look is the one Balance will use going forward, the downtown Toledo restaurant/farm is the project that stands out most in Karamchandani’s mind. Not only did it create a unique operation, with an indoor farm supplying the restaurant across the hall, it also taught him much about developing a new look, revitalizing older facilities, developing a space and partnering with government agencies.

“It was a huge struggle, but the payoff was so big,” he says. “It was a super rewarding experience overall. I learned a lot more than I could on any other project, and I’m just thankful that we had the opportunity and we were able to make it through. It was a huge challenge to get to a huge payoff.”