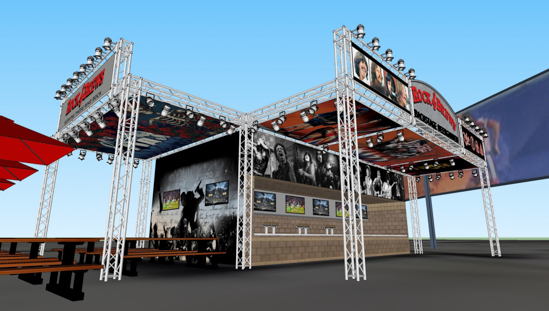 "We spend a lot of time performing in large venues while on tour, and Rock & Brews is a perfect fit for sports and entertainment fans," said Stanley in a company statement. "We plan to rock the large venue food and beverage business with a broad selection of international and craft beers and quality American comfort food."

Rock & Brews has two restaurant-style concessions at StubHub. One offers beer only — with local craft beers as a focus — while the second offers both beer and food. The latter (pictured above) is a freestanding, roughly 60 foot by 60 foot concession area designed by Beverly Hills-based Larry Drasin of Drasin Design. It includes an area with picnic table seating, a feature that Drasin says is also incorporated into the brand's traditional full-service restaurants to create a family-friendly, beer-garden-style environment.

Though on a smaller scale, the traditional units' concert-themed design strategy is also translated to the new stadium-friendly prototype. "The whole idea of Rock & Brews is to make it feel like you're backstage at a live concert venue," Drasin says. "So we use a lot of stage lighting, the lighting truss, the large over-scale graphics. We just create the energy of a concert through the design."

The challenge of translating a traditional full-service brand into a stadium concession lies in being able to serve a large volume of people quickly, Drasin says. To that end, the StubHub Center venue features multiple cash registers and a menu limited to just a few popular items. A full kitchen operates behind the counter and a commissary provides support, as well.

Stanley and Simmons, along with co-founding partners Michael Zislis and Dave and Dell Furano, plan to expand the Rock & Brews brand internationally with freestanding restaurants, airport locations and venue concessions. To date, in addition to the new StubHub concessions, the company operates three Los Angeles-area restaurants and one each in Maui, Los Cabos, Mexico, and Overland Park, Kansas. Another is set to open in August in Albuquerque, N.M., and others are in development in Ovieto, Fla.; Phoenix; and Cabos San Lucas.