During rd+d’s recent webcast, Designers Dish, Live! (you can hear the whole thing for free here), three seasoned designers shared insights on some of the biggest forces and trends shaping their restaurant projects today. Top among them is the move to create integrative, immersive designs that bring diners closer to the action, that eliminate traditional barriers between front of the house and back of the house.

Meagan Hurst, senior designer at Studio McCormack in Costa Mesa, Calif., said it’s all about creating a unique experience for guests, one that’s authentic, theatrical and engaging. “We’re really noticing the growing importance of the perception of the process of cooking and the kitchen itself and integrating that into the dining environment,” she said. And, while display kitchens are central to the trend, what’s happening now goes much farther to bring the behind the scenes out front. It’s not just exposing the kitchen, but integrating it – and much more of it -- in new ways. 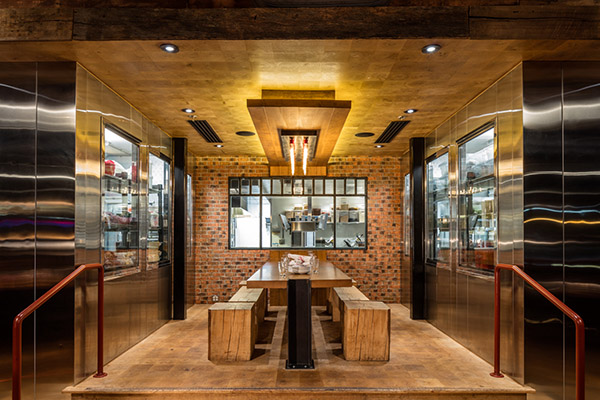 Recent Studio McCormack projects that speak to the “no boundaries” trend include a design for a Matchbox American Kitchen + Spirit location in Virginia. Yes, there’s an open kitchen, but the design team also created a unique dining area that’s flanked on three sides by windows that offer up a bird’s eye view into the walk-in coolers and prep areas. “It’s not just the expo part of the kitchen, but it’s the prep, the kitchen, the storage,” Hurst said. “Nothing is hidden anymore, it’s all exposed.” 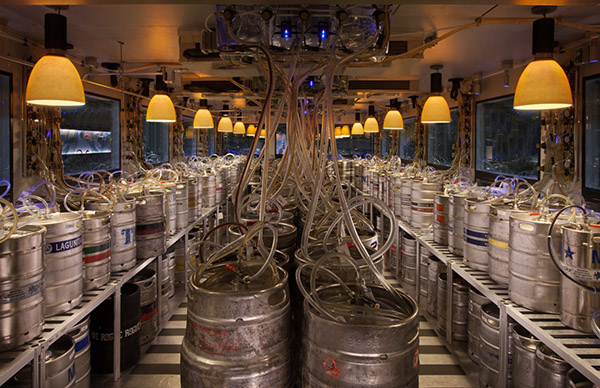 Yard House in Las Vegas. Photo courtesy of Studio McCormack.In another project, for a Las Vegas Yard House where a huge selection of craft beers on tap is central to the concept, Studio McCormack used a similar pull-back-the-curtain approach to make the usually hidden keg room a signature design feature. “What we’ve done there is to expose how the beer actually gets from the keg to the tap, the messiness of all the beer lines running up into the ceiling and then back to where the bar is,” Hurst said. “It’s sort of like a backstage pass into the reality of how the restaurant functions and helps give diners what they feel like is a special experience.”

In a broader sense, the move to provide such visual backstage passes to diners in more integrated ways speaks to consumers’ increasing appetite and demand for transparency. While those demands seemed initially to center on food, ingredients and menu, operators and designers are applying those same concepts to create new and exciting dining environments, as well.

A peek into a design-enhanced Yard House beer cooler? A chance to look straight into the walk-in cooler where the ingredients for the meal you’re about to enjoy are stored and displayed? For someone who’s never worked in a restaurant – even for many of us who have – that’s a pretty cool backdrop to dinner.

Dishwashers get ready. Your station could be the next to be put on display!