Back to the Future with Retro Bars

Those same entrepreneurs who mined the past for food and drink concepts like speakeasies and tiki bars are looking to the 1970s and 1980s for inspiration. Contemporary takes on the fern bar are filtered through a lens of nostalgia rather than accurate recreations — perhaps more influenced by the Regal Beagle pub in the ’70s sitcom Three’s Company than real life. The concept appeals, designers say, both to those Boomers who remember fern bars fondly as well as the Millennials and X-ers just now discovering them.

Sprouting up back in the 1970s and ’80s, the hugely popular fern bars were characterized by Tiffany lamps, brass rails and decor that might have come from Grandma’s living room. And those ferns, of course. The bars, notoriously known as meet markets, catered to singles with comfortable upholstered seating and mellow lighting and served easy-drinking cocktails like white wine spritzers, Lemon Drops and Harvey Wallbangers. Pioneers in the genre included Henry Africa’s in San Francisco and the original TGI Fridays in New York City. Fern bars flourished for a few decades with chains like Bennigan’s and Houlihan’s.

Is the fern bar genre ready for a revival? “Design and food-and-beverage trends are both cyclical,” says Heather Maloney, vice president of design for New York–based Chelsea Hotels. As she researched ideas for Oleanders, the designer found others across the country picking up on revitalizing fern bars. “It’s an emerging trend.” 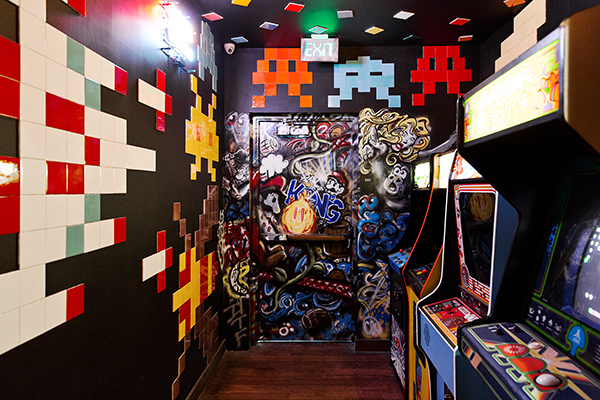 Patrons enter via the side-street loading dock of the Line Hotel and proceed down a long corridor, passing by the bustle and clangor of the hotel’s kitchen, until they reach a hostess stationed in what appears to be an old-fashioned employee break room complete with a lineup of food-and-drink vending machines. The hostess opens a door concealed behind one of the soda machines, transporting guests into the experience of Break Room 86, a passionate homage to the 1980s that opened in March 2015.

“It’s all about transporting people into a new experience,” says Jonnie Houston, who teamed with his fraternal twin brother, Mark, to form Houston Hospitality, which operates more than a dozen uniquely themed nightlife hot spots in the Los Angeles area. “Entering Break Room 86 through a modern hotel lobby would detract from that ’80s vibe,” Mark Houston points out. To set the stage for a recent party for the 30th anniversary of Back to the Future, one of the original DeLoreans from the movie was on display, parked at the loading dock.

“The design of Break Room 86 was based on our childhood, our fondest moments,” says Jonnie Houston. The lounge-nightclub-karaoke bar calls Los Angeles’s Koreatown community home. And this is where the brothers grew up during the 1980s. “So it was only natural to bring back that whole experience.”

Much of the decor details were scavenged by the Houston brothers from flea markets, thrift stores and Craiglist. One wall for the space was created from nearly 7,000 vintage ’80s cassette tapes. The wall contains a concealed door that leads to backstage dressing rooms. Mark estimates that for the amount of money spent on rare cassettes, he could have installed a wall of Carrara marble.

The club’s DJ booth was constructed from repurposed boom boxes. Roadie sound equipment cases stenciled with ’80s band names serve as cocktail tables. The covers from videotapes of iconic ’80s movies encase the drink and food menus. Antique silver chrome microphones were repurposed as lights: two pendant fixtures and a number of sconces. “They have a Sputnik-like feel,” says Jonnie. 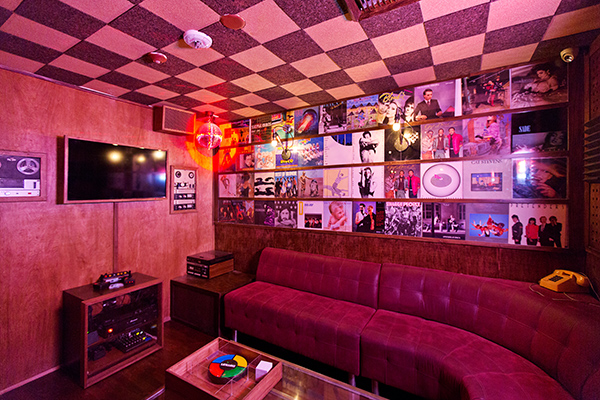 Break Room 86, Los AngelesThe space measures approximately 3,500 square feet with 125 seats and a maximum capacity of 275 people. Four karaoke rooms each possess a unique style: one is themed for the movie Cocktail, for example; vinyl records from the brothers’ own collection form the wall of a second karaoke room; another sports a vintage neon Pepsi sign, and guests enter via a Pepsi vending machine. An old-time telephone booth serves as a “speakeasy” entrance into another karaoke room; once the booth door is closed, a concealed door opens to the space.

The game room sports the likes of Pac-Man and Donkey Kong, all coin operated. To decorate the restrooms, the twins made collages with press clippings from that era. A patio is home to an old ice cream truck, which serves boozy push-up pops, ice cream Grasshoppers and a Rocket Pop cocktail.

“We get all ages in our venue,” says Jonnie, “and they will say, ‘Oh my God, I remember these,’ or the younger generation will exclaim, ‘Oh my God, I’ve never seen these.’”

“The retro concept at the Heavy Feather — we use the term throwback — came about because we felt a warm nostalgia for the 1970s era and hoped to resurrect it in a fun and faithful manner,” says Danny Shapiro, whose partners in the Chicago-based Scofflaw Group, which also owns the Scofflaw Bar, the Slippery Slope and Sink|Swim, are Andy Gould, Mandy Tandy and Kris Nagy.

The operation was designed by Steven Teichelman, owner of Threefold Design Build, who has worked with the Scofflaw Group on a number of projects. “We are all products of the ’70s, all have memories of fern bars,” says Teichelman. “Collectively, we came up with our own translation of that genre, having fun with it.”

Teichelman and his team built and installed intricate woodwork details throughout the space. Over the bar, they crafted wooden soffits; these are actually lighted cabinets with spindle fronts. The team scoured thrift stores, flea markets and websites to find vintage items from the era, which are displayed in those cabinets — “Grandma’s house tchotckes,” Teichelman calls them. The corner soffits house the pride of that collection: two vintage rain lamps. These ’70s-era relics are sculpted figures — in this case, a beautiful Venus and a doughty conquistador — given the illusion of rainfall by beads of oil running down fine nylon lines surrounding them.

Under the soffits, bar lamps with walnut frames and salvaged gold honeycomb gratings give off a mellow warm glow. The booth areas reprise the spindle motif, which echoes throughout the design. Booths also boast Tiffany lamps and dropped ceilings to make them feel cozy. Chairs (rather than stools) are upholstered with faux leather — another nod to the era, as are the brass railings, a peacock motif for the wallpaper, parquet flooring and gold-framed mirrors.

The layout is pretty straightforward, says Shapiro. The 2,500-square-foot space breaks into three parts. Upon entering, the first section is a small room with tables and chairs to accommodate 30 people. The second section wraps around the bar, and the final section is a row of high tables adjacent to the bar for standing only. Total capacity of the intimate lounge is about 90 guests.

Another key component of the Heavy Feather is a unique, 25-foot-long sunken bar. “We also used differing elevations between the customer’s space and the bar and backbar in order to replicate a sunken bar,” says Shapiro, referring to a key element of bar design from that era. “The arrangement makes the space feel more intimate and creates a friendlier dynamic between customer and bartender.”

Adds Shapiro, “We were trying to create a more intimate lounge where people could relax and enjoy cocktails away from the chaotic downstairs space, the Slippery Slope.”

The Heavy Feather, ChicagoNew York’s revival of the fern bar opened last June in the heart of hipster Brooklyn: veteran restaurateurs Joe Carroll (Fette Sau and St. Anselm, among others) and Francesco Panella (Antica Pesa) teamed up to create Oleanders, a restaurant and lounge in the McCarren Hotel & Pool in Williamsburg.

“Fern bars were the first to really capture both the male and female audience as a singles spot and are the forerunner of many elements of dining you see today,” says Maloney.

True to the genre, the space is green with abundant ferns and ivy entwined with white oleander blooms. “We wanted the fern element to be very lush and a bit over the top,” explains Maloney. The greenery is faux because of the maintenance difficulties of live plants.

Another archetypical element that’s over the top is the massive Tiffany-inspired chandeliers, 72 inches tall and 50 inches in diameter. Four of the five chandeliers arrived intact; the fifth had to be repaired. To get the huge fixtures inside, the team had to dismantle the main entrance and vestibule, which couldn’t be restored until the fifth lamp was fixed and delivered.

Other features accentuating the modern fern bar aesthetic include a checkerboard floor, oak paneling on the walls and mirrored panels on the backbar that add sparkle. Portraits of anthropomorphized animals on the walls add a little quirkiness to the space. In terms of seating, Oleanders uses classic bentwood chairs and comfortable leather banquettes at custom green-lacquered dining tables. Copper cladding on the communal table and two bars adds warmth to the space. “Copper is making a resurgence in interior architecture,” notes Maloney. It references high-end cooking pots and pans.

The restaurant serves a throwback menu from chef Kevin Chojnowski, with a modern twist on dishes like lobster Thermidor, beef Wellington and pasta primavera. The cocktail menu references the ’80s with drinks like the Harvey Wallbanger, Grasshopper and Long Island Iced Tea, updated by renowned mixologist Dale Degroff.

Situated in the basement of the hotel, Oleanders has a footprint of about 1,700 square feet, with a dining room that seats 82, plus a dining bar and a cocktail bar, as well as a game room with vintage ’70 – ’80s arcade games. Helping to open up the space are 19-foot ceilings. “It’s a pretty, double-height space, sun-filled by windows on either side — even though it’s in a cellar,” says Maloney. The large Tiffany-style lamps fill the overhead void, giving the place a cozy feeling.

“It was a challenging project,” recalls Maloney. The team had less than three months to complete the project from sign-off — and a budget of $250,000. The concrete floor was painted with a checkerboard to save the cost of installing tile, for example. “The work combined a few custom focal pieces with a lot of resourceful shopping,” she adds.

The retro design has garnered Oleanders a lot of press and buzz online; the lounge is thronged with locals and hotel guests. Says Maloney, “With Oleanders, we have recreated the past for Millennials to discover and for those who have lived that period to revisit it.”