The operation is owned by Brechtel Hospitality Group and designed by Studio West Design & Architecture. It was created to serve as a neighborhood hang-out with multiple spaces offering guests different bar/restaurant experiences. 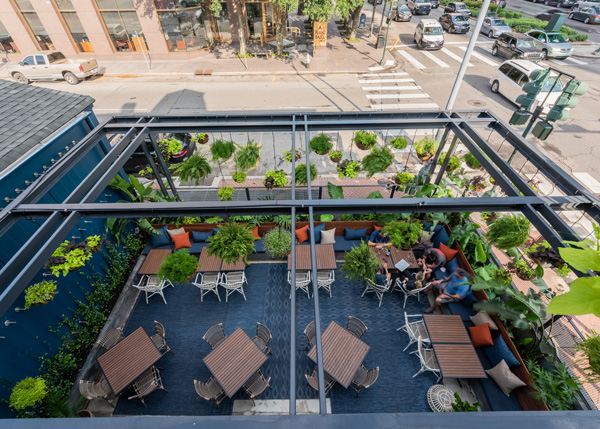 One of Copper Vine’s signatures is its new outdoor seating area. According to Jennifer Cannon West, owner of Studio West, this space was created to give the gastropub a visible presence and identity from the outside.

While most outdoor spaces have a concrete floor, West specified outdoor rugs for this area. “They actually conceal quite a bit of concrete damage. Rather than resurface the floor we did outdoor rugs as an easy solution without adding any additional variation in height.”

The space is furnished with aluminum rattan-style furniture, chosen for durability because, as West says, “in New Orleans, ultimately everything goes back to the swamp.”

Also metal is the patio trellis. This is a nod to one of the building’s previous occupants. According to West, this space was once the home of Maylie’s, a well-known New Orleans restaurant that operated for more than a century. One notable feature of Maylie’s is a wisteria vine that actually grew into the building and around the restaurant’s bar.

“We wanted to bring back the story of the wisteria vine,” says West. “We have wisteria growing in all four posts of the trellis. In the interim, the hanging plants are there to provide the same feel of a canopy. They may eventually go away as the wisteria covers the trellis itself.” 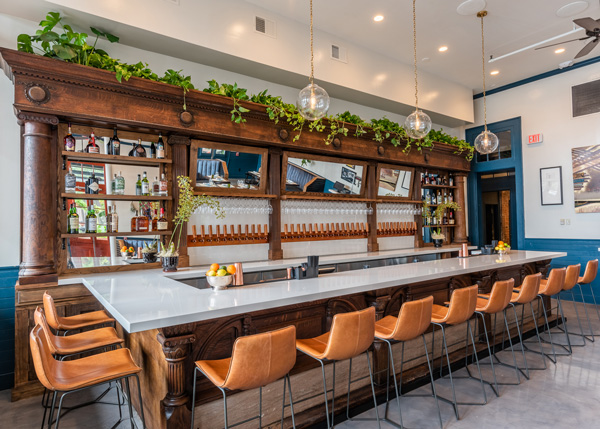 Occupying a historical building, West and the operator sought to keep many of the structure’s existing features. Among these is the bar, which dates back to 1896. The base and bar back were sanded and restained, while new elements include wood-framed mirrors in the bar back, chosen to help open up the space.

Also new is the bar top, a white solid surface material with a highly reflective surface. This same surface folds to the back of the bar and highlights Copper Vine’s tap wine display. Immediately above the taps themselves are hanging wine glasses, which contribute to the operation’s pub atmosphere.

A similar touch are the bar stools, which are upholstered in brown leather. “We wanted something that would patina over time and that had a little more copper to it,” West says. 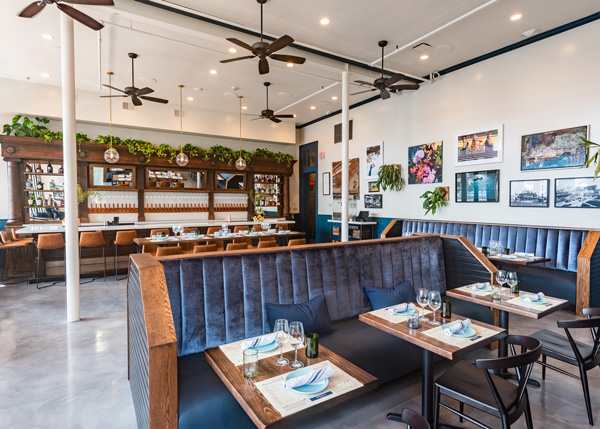 In addition to the bar, the downstairs area has table seating for guest who want to enjoy a meal. Reflecting its neighborhood approach, the space features art from local artists. While the building previously had wood floors, due to flooding concerns its flooring is now stained concrete. This surface contributed to the use of banquettes along the wall and in the middle of the room, says West.

“The banquettes broke up the space a little bit and also provided a little bit of a break acoustically. We have a lot of hard surfaces and a lot of the walls are original plaster on masonry...They also continue the blue wainscotting into the middle of the room.” 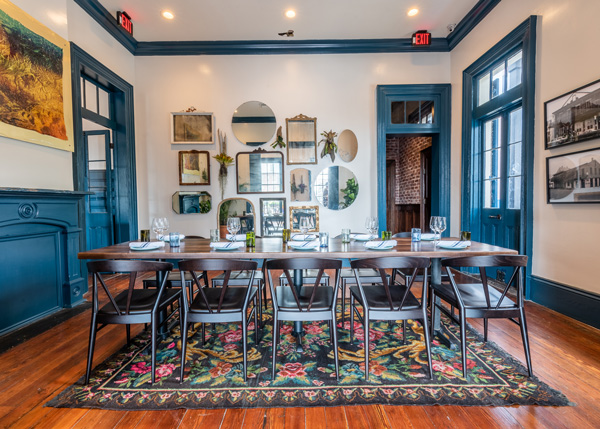 Copper Vine’s second story continues many of the themes found on the first floor, including local art and greenery. Instead of one large room, it has three smaller rooms. This floorplan is original to the second story, which was at one time the residence for the owners of Maylie’s.

As such, West designed the spaces with a more residential feel. The entire second level has the original hardwood floors, while one room features a 10-top with antique mirrors on the wall and an area rug on the floor.

“We wanted it to feel like it was more of a private dining, elevated experience. You can have a chef’s table, you can have private wine tastings there. It does feel a little bit more residential in scale,” West says. 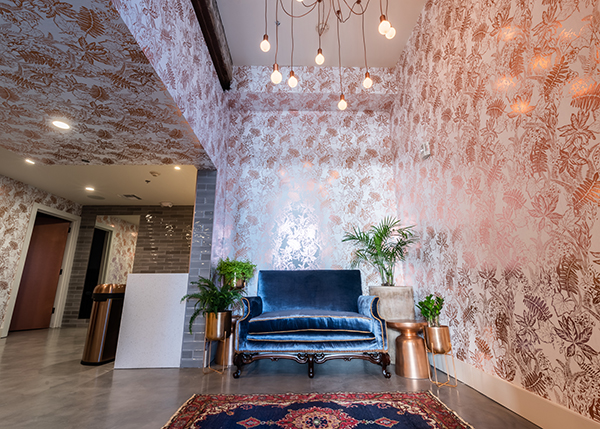 As a historical building, West had to update some infrastructure to bring the space up to code. This includes the building’s restrooms, which did not meet ADA guidelines. As a solution, West created a gender-neutral lavatory with individual water closets.

Outside the space, she created a lounge designed to be Instagrammable. This spot includes hanging Edison bulbs and a blue settee surrounded by wallpaper featuring copper vines. This paper, notably, is not custom. Instead, it’s a hand screen-printed product found during the project design.