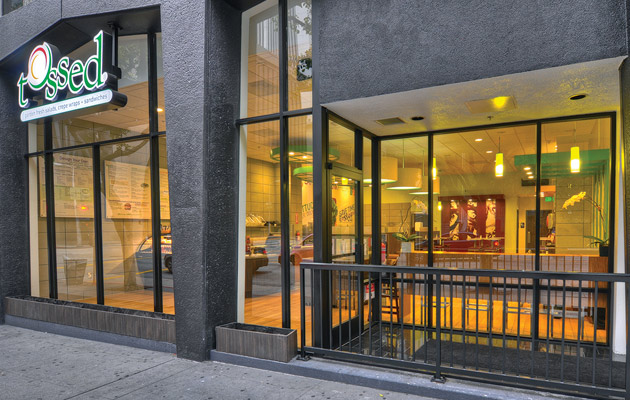 A Los Angeles franchisee of Tossed, a salad restaurant chain, chose a former bank location to build a new restaurant and quickly discovered that complying with the Americans with Disabilities Act (ADA) would be a challenge. In bringing the site up to code, the owner paid $100,000, about a quarter of the restaurant's overall cost, to create wheelchair ramps.

"The percentage of our guests impacted by the ADA is so slim, but we do it more as a moral responsibility than for our business," says Michael "A.T." Toroyan, chief operating officer and chief development officer of Tossed Franchise Corp.

The ADA has made life easier for the more than 50 million Americans with disabilities, who comprise some 18 percent of this country's population, according to the U.S. Justice Department. But the same can't be said for restaurant operators, who contend with differing and evolving accessibility regulations imposed at the federal, state and city levels.

"We have to think through ADA compliance because there has been more of an emphasis on accessibility in the last few years," says Scott T. Reitano, principal of Reitano Design, a foodservice design firm based in Indianapolis. "Although architects are responsible for incorporating ADA items, we have to make sure spaces are big enough to work with."

In fact, by March 15 of this year, all new buildings and pre-existing structures being renovated in the U.S. need to comply with the ADA Standards for Accessible Design established in 2010. "This is the first update to the ADA Standards since the original accessible design regulations were established in 1991," says Peter Berg, project coordinator of technical assistance for the Great Lakes ADA Center, part of the ADA National Network. "With these new standards, the U.S. Access Board has created design guidelines adopted by the U.S. Department of Justice that better harmonizes federal ADA standards with international building codes in an effort to make compliance easier for designers and architects."

Under the Act's safe-harbor provision, restaurants constructed or altered in compliance with the 1991 ADA Standards don't need to make modifications to specific elements to comply with 2010 regulations, even if the new standards have different requirements. This means a restaurant built prior to 2010, with 50 percent of its entrances meeting the accessibility standards of the 1991 ADA requirement, does not need to update this amount to 60 percent under the 2010 standard, unless the building undergoes a renovation.

In other words, if elements that were in compliance with the 1991 standards are in any way altered, the safe-harbor provision no longer applies to those elements. 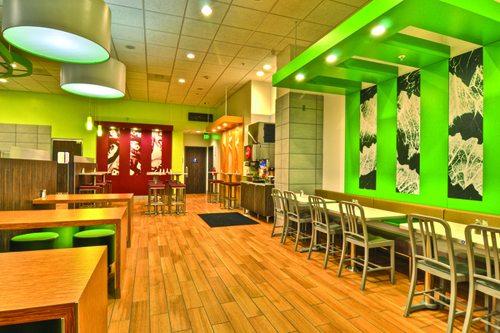 Other changes made under the 2010 ADA update that can impact restaurants include accessible parking; one out of six spaces must be van accessible, as compared to one in eight spaces under the 1991 standards. "If a restaurant operator is resurfacing or restriping the parking lot, this needs to be taken into account," Berg says.

Accessible seating requirements also have changed. Under the 1991 standards, 5 percent of restaurant tables needed to be accessible. The 2010 ADA guidelines expand this to 5 percent of all eating surfaces.

"Until recently, there were no standards for places where customers ate standing up, like a bar," says Angelo Amador, vice president of labor and workforce policy for the National Restaurant Association (NRA) in Washington, D.C. This change can impact the design of a restaurant, since the entire space needs to be considered in light of the new requirements.

"Also, restaurants can't put all accessible seating in one area; it has to be dispersed throughout the building, including the bar, dining area and lounge. There also needs to be at least 36 inches between seating," says Ken Mackenzie, senior program manager at Core States, an Atlanta design firm.

Core States is working with Dallas-based Brinker International on a reimaging program for its Chili's restaurants. "ADA accessibility is a part of that," Mackenzie says. "The experience for disabled Chili's customers is expected to be seamless due to cutting-edge changes. The approach we take is that this is no different than the building code."

The Chili's brand update will include the exterior, interior, signage and menu. With ADA, it's not just the exterior and dining room components that restaurant operators need to address.

"Restrooms are a big target [in terms of compliance violations], since there are many elements to consider," says Ken Mitchell, vice president of operations at ADA Compliance Consultants, based in Folsom, Calif. In single-user restrooms, the facility now must provide clearance for both forward and parallel approaches, and in most situations, the lavatory cannot overlap the clearance. The doors in these areas may swing into the clearance around any fixture if clear floor space is provided within the toilet room beyond the door's arc.

Restaurants need to address the needs of employees with disabilities under separate ADA requirements. Employee areas, including break rooms, restrooms and locker rooms, need to be accessible for those with disabilities, even if they are not open to the public.

Under the 1991 ADA Standards, work areas were required to permit an employee using a wheelchair to approach, enter and exit the area. Under the 2010 standards, new or altered work areas must include accessible common use circulation paths, which are subject to certain specified exceptions. Berg points out, however, that under the 2010 guidelines, circulation paths in work areas that are less than 1,000 square feet are exempt.

The future of accessible design is geared for the aging population, which includes people who might not think of themselves as having disabilities, but may have impaired vision or hearing issues. According to the U.S. Department of Justice, approximately 71.5 million baby boomers will be more than 65 years old by the year 2030, and a number of these people will face physical challenges. Regulations or not, from a demographic standpoint, considering this group's accessibility and comfort needs simply makes sense.

"To accommodate these customers, restaurants need to look beyond ADA regulations," says Eric Lipp, director of Open Doors Organization, a Chicago-based nonprofit organization that aims to create a society in which people with disabilities have the same consumer opportunities as people without disabilities. "These standards aren't the key point. It's more about what can be done with the design, because that aspect is not regulated."

Incorporating low-glare lights so vision-impaired customers can more easily read menus, automating lighting in restrooms and using curved walls instead of doors for restroom separation are more creative ways to accomplish accessibility and enhance customer experiences, according to Lipp.

In some instances, a restaurant's reputation can be enhanced by this attention to detail. "McDonald's is known for having very accessible bathrooms and other chains, like P.F. Chang's, do a great job with creating accessible paths of entry," Lipp says. "Sullivan's Steakhouse in Chicago has a centrally located elevator to its second floor, while another chain's only lift was a freight elevator in the kitchen. Both setups are legal under the ADA, but Sullivan's had a smarter design."

It helps when chains have franchisees, like Tossed, who are willing to invest in becoming more accessible. "We had a new Boston franchisee re-grade the outside concrete to make sure it was ADA compliant, which was extremely costly due to the union labor," Toroyan says. "They decided it was worth the burden, because disabled folks are dealing with obstacles every day."

Toroyan makes it a point to work his way around Tossed sites, looking at potential accessibility issues. "I look at the slope of the sidewalk, entrance threshold and door tension," he says. "Sometimes there are simple changes that can be made to make an individual's life easier when they visit our restaurant." 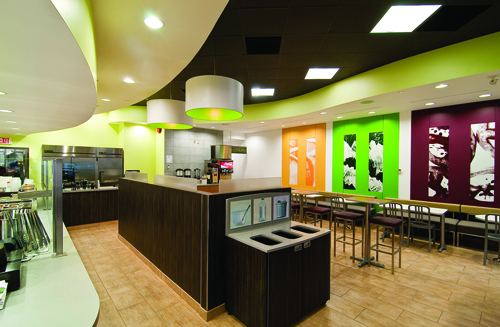 A number of common mistakes trip up operators who are attempting to become or stay in compliance with the ADA.

When creating an accessible path into a restaurant, for instance, various factors come into play. "Operators need to remember that there are a number of ways a patron will get to the front door," Mackenzie says. "It's not just clearing a path from the parking lot, but also from bus stops or other pedestrian walkways. There has to be a proper route that is clearly identified and marked."

Federal, state and city accessibility requirements also come into play with slopes and handrails. "Since the ADA was enacted, the federal government requires businesses to remove barriers when it's viable to do so and make upgrades when it's not cost prohibitive," Mitchell says.

Rather than risk a lawsuit, restaurants can take a proactive approach by having an ADA authority assess the interior and exterior of the property for possible violations.

"State building departments aren't legally required to recognize federal ADA codes that haven't been adopted by the state," Mitchell says. "This leaves a gap for states that haven't fully adopted the federal codes in their entirety."

States like California are seeking to not only close the gap between federal, state and local accessibility requirements, which will help boost compliance overall, but are also striving to put a stop to ADA abuses.

"Right now, a restaurant can open with the county, city, architect and designer signing off on it, and the next day someone can come in and insist it is out of compliance," says Daniel Conway, legislative and public affairs director for the California Restaurant Association in Sacramento. "There were lawyers targeting foodservice operations looking for ADA technicalities with which they could pursue a private right of action. It had become a persistent problem throughout the state and created a cottage industry."

In response, California passed a new law in September of last year that prevents misuse of the ADA. The bipartisan Senate Bill 1186 bans attorneys in California from sending letters threatening to sue business owners who don't pay settlement amounts for noncompliance. SB 1186 also gives business owners credit for improvements signed off on by local building departments, according to Conway.

"There is a real important purpose for the ADA, and it should not be used as a vehicle for litigation. It's about access," he notes.

"In California, architects are challenged because the ADA is a civil rights law that differs from the California Building Code. There are two different standards to follow," says Dennis Corelis, deputy state architect for the California Division of the State Architect.

A new building code proposed for 2013 implementation in California is geared to adopt federal ADA guidelines, which will help ensure consistency. Some states, including Florida and Texas, have already incorporated federal accessibility requirements into state building codes.

Nonetheless, the onus remains on restaurant operators to keep their businesses ADA compliant and to stay up to date with new regulations. Doing so is the best protection and can be good for business as well. Says Toroyan, "We've chosen to absorb the added costs and burden because we believe in the ADA. We've found that many of the standards we've incorporated are beneficial for able-bodied customers, as well."