Georgia-based fast-casual chicken phenomenon Zaxby’s will get a new look, just in time for its 25th anniversary this year. Operating as a big company with a small-company culture, the primarily franchised concept has seen rapid growth and expansion in the past two decades, but the last two years have been particularly productive. 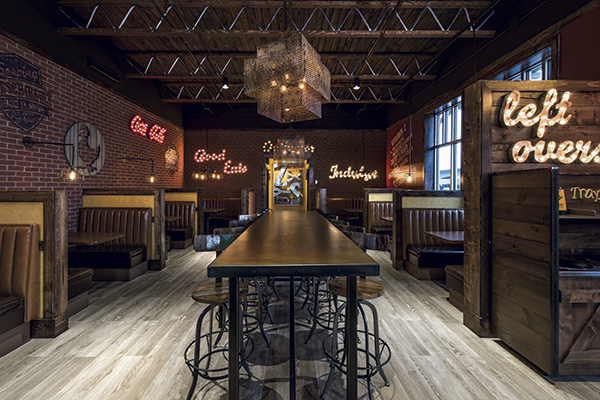 A variety of seating styles appeals to diverse groups and occasions. Countertop stool seating overlooks the front windows while a central, rustic wooden farmhouse-style table can accommodate larger groups or communal dining. Booths with 6-foot dividers for added privacy and a mix of low- and high-top tables make up the rest of the seating plan. The company hit $1 billion in sales in 2013 and has opened more than 100 new stores since. Just last year, Zaxby’s opened 65 units in 15 states, and by the end of this year, the chain plans to have more than 700 locations, many of which will boast the fresh, new, farmhouse-inspired prototype design.

“We wanted to stay true to our brand but encourage customers to have a more personal dining experience,” says co-owner and founder Zach McLeroy, who opened the first Zaxby’s with Tony Townley in Statesboro, Ga., in 1990. “The primary motivator behind the new design concept is to improve operational excellence and guest experience. The goal is to go back to some of the earlier stores from 15 years ago and start retrofitting them with the new design.” 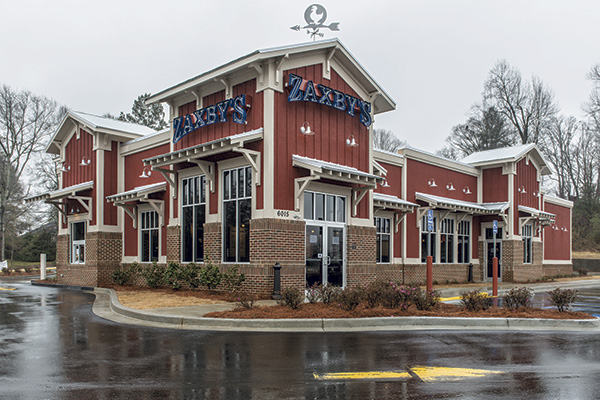 Zaxby’s debuted the new prototype in early January at its Easley, S.C., restaurant, which originally opened in 1997. The company bought out the adjacent parking lot for extra building space, making the Easley store — at 5,000 square feet — much larger than most Zaxby’s units. Most average either 90 seats at 3,850 square feet; 70 seats at 3,655 square feet; or 50 seats at 2,800 square feet. The team also renovated its original 130-seat restaurant in Statesboro, which the partners opened while attending college at Georgia
Southern University. 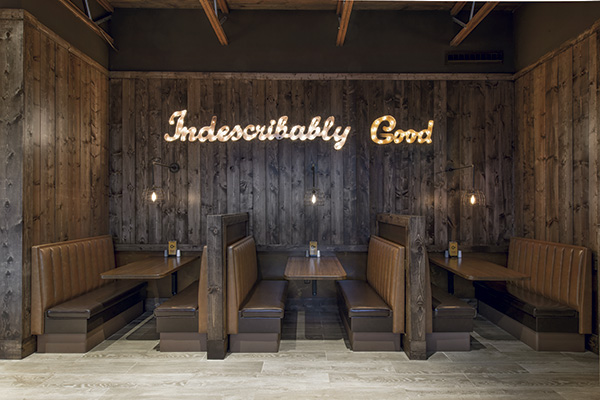 Zaxby’s rise to stardom is one of those American Dream tales, with the owners continuing to have a solid hand in every aspect of the business, including the design — even as the company has seen lightning-fast growth. In fact, McLeroy came up with the farmhouse concept.

“Since day one, I’ve tried to be intimately involved in the design elements of our stores,” McLeroy says, noting that he used to decorate the earlier restaurants himself with fun finds from flea markets and art festivals.

McLeroy worked with architects at Hill Foley Rossi & Associates to create comfortable, cozy and inviting interiors with a mixture of seating to appeal to a diverse group of diners. Countertop-style stool seating overlooks the front windows while a centrally located, rustic wooden farmhouse-style table can accommodate groups of six to eight or serve as a place for communal dining. Quiet booths with 6-foot dividers for added privacy and a mix of low- and high-top tables make up the rest of the seating plan. 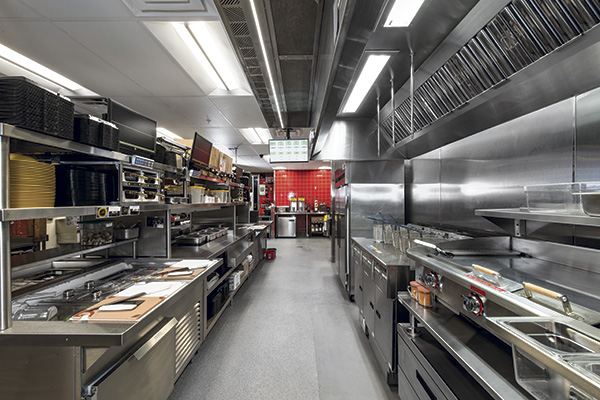 The new prototype includes major operational enhancements, including a new dual-sided, full cooking and prep suite down the center line of the kitchen, which enables drive-thru prep on one side and in-store dining prep on the other. Warm earth tones, red-washed and exposed brick walls, open wood-beam ceilings, tiled floors resembling wooden planks, Edison bulb lamps and more galvanized tin accents complete the authentic farmhouse atmosphere. Even the restrooms match the decor, with large farm-style sinks and distressed wall tiling.

“We were going for a nostalgic, retro feel that would appeal to everyone no matter if you’re a Millennial or a Baby Boomer,” McLeroy says. Vintage signage and fun sayings inscribed on wood panels decorate the walls.

The newly opened-up kitchen, directly visible upon entering the restaurant, adds energy to the space and allows customers a better view of the fresh food preparation. Zaxby’s prides itself on preparing its food to order for quality and freshness. “We took down the wall that used to stand between the cashiers and the kitchen because we have nothing to hide,” he says. 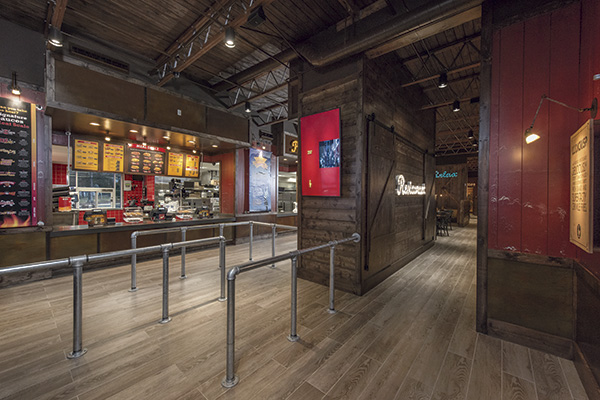 Entry and ordering areas were redesigned to better manage traffic flow and to expose the kitchen, adding energy to the space and giving guests a view into the fresh-prep action.Zaxby’s began reviewing its operations more closely a year or so ago. Average unit sales had reached $1.7 million, and by the end of last year they’d risen to $2 million.

“We felt like we were stressing the operators with our older stores and needed to improve our internal systems,” says Robert Baxley, chief operating officer. “We’ve outlived that footprint.”

In addition to sweeping exterior and front-of-house design changes, Zaxby’s made major operational and kitchen enhancements geared toward speeding up ticket times while staying true to the concept’s prepared-to-order mission. “Everything is based on transaction management,” Baxley says. “We looked at every step, from the field to the supply chain to the back of the house, to how long it takes to prepare orders, drive-thru expectations, packaging and more in order to create an incredible guest experience.” 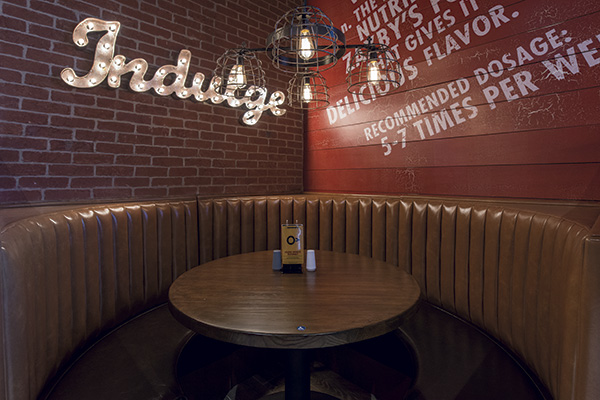 Warm earth tones, red-washed and exposed brick walls, open wood-beam ceilings, tiled floors resembling wooden planks, Edison bulb lamps and galvanized tin accents complete the authentic farmhouse atmosphere. One major operational change included a switch to a more open, conversational ordering style and counter setup, where customers place their orders at one end, moving down the line to pick out sauces and sides and get their beverages at a separate station, and then picking up their complete orders when staff member call their names.

Zaxby’s also adjusted kitchen roles and training to focus on single-station mastery for better consistency and reduced product hold times. Now, multiple employees work together to fulfill parts of an order. To support this new setup, the company updated its kitchen equipment package, installing a dual-sided, full cooking and prep suite down the center line of the kitchen, with drive-thru prep on one side and in-store dining on the other.

The chain also brought in more advanced POS systems and a new dynamic ordering system that enables parts of an order to be immediately communicated to screens in the kitchen as the cashiers enter them. This helps reduce bottlenecks that occur with large orders. “The ticket does not have to be tendered in order to be sent to the kitchen, so there is zero delay,” says Baxley. “We have been able to reduce our average ticket time from nine minutes to three.” 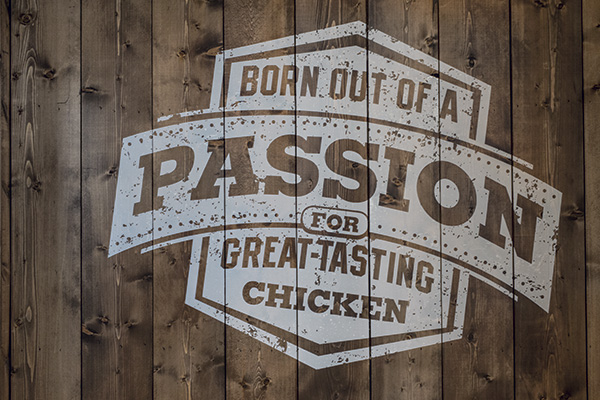 In addition, Zaxby’s continues to test two new drive-thru setups at the newly redesigned Easley and Statesboro restaurants. The Easley location features a dual-lane setup while Statesboro now has an extra window so payment and order pickup can remain separate. Each individual window even has its own beverage area with a Coca-Cola Freestyle machine for self-service. “We expect to see up to a 30 percent increase in sales as a result of two full drive-thru lanes,” Baxley says. “Traditionally our drive-thru would take 5 to 10 minutes, but we’re targeting 3 minutes with the new setup.”

This, in addition to the faster ticket times for in-store dining, Baxley says, should lead to higher total throughput for even greater sales. 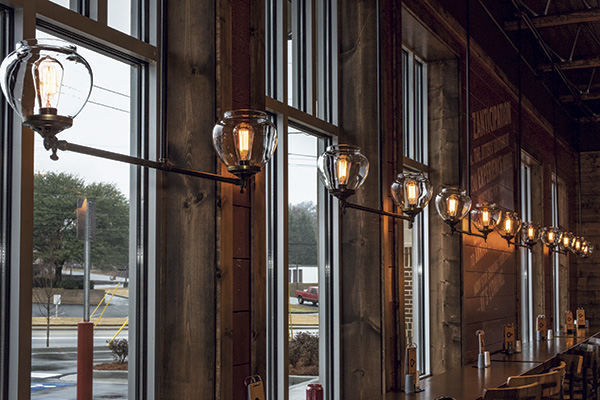 As Zaxby’s is a nearly 80 percent franchised chain, success of the new design depends on its acceptance by franchisees. And initial response to the improvements has been positive.

“Most are anxious — in a good way — for the new design to come out,” Baxley says. “As the licenses come up for renewal, we’ll help our licensees make the design changes.”

Though the new design will naturally require some extra costs, many of the franchisees look at the change as an investment in their stores. “Everyone is focused on our core values of being guest focused, developing talent, operational excellence and continuous improvement,” he notes.

Kathy Brooks, senior director of design and construction for Zaxby’s Franchising Inc., plans to work hand in hand with franchisees to implement the new design rollout, including analyzing costs to make sure they are reasonable. “We will be conducting a lot of testing in our corporate stores this year before we roll the new design out system wide because we have to be the support system for our licensees,” says Brooks. “We will judge the new prototype as a success if it is a) easy to obtain, b) easy to install, c) affordable and d) holds up to wear and tear.”

The chain plans to assist licensees during the building process as well, including conducting job inspections. The most challenging part of the new design is working with the different existing legacy building styles.

“If a licensee has a particular style building that we know can be easily modified to incorporate the exterior farmhouse look and some of Robert’s kitchen, we can incorporate the new prototype. But if they have a building from another concept before it became a Zaxby’s, the changes might not work for that location,” says Brooks. “The new dining room finishes are a pretty easy change, but some of the older locations have smaller kitchens, so it will be challenging to rework the new equipment within those spaces.”

Many older Zaxby’s locations also feature larger outdoor seating areas, but the chain has discouraged them in new builds over the past several years because they can be difficult to maintain, says Brooks. In the new design, Zaxby’s will consider a patio a special request.

With the new design, Zaxby’s falls into a growing category of quick-serve and fast-casual chains updating their appearance to match the modern times and modern, food-centric customers wanting a comfortable and authentic dining experience. “We’ve spent the past six years in this postrecession economy continuing to grow and develop our internal support and systems,” says Baxley. “It’s been a truly amazing experience for us to be a part of such a great franchisor community. We try to be good leaders and give them the tools and support to be successful.”