A Closer Look at Restaurant Ventilation 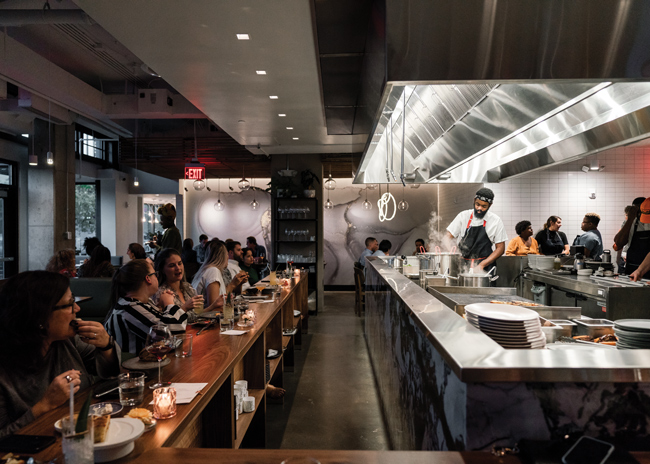 You know when a ventilation system is performing well when nobody notices it. There’s a lot that goes into the design to achieve that result, though, and it’s critical to get the details right.

A restaurant offers unique HVAC challenges that set it apart from other commercial spaces. Kitchens generate heat, smoke and grease, requiring robust ventilation. What’s more, at peak times many restaurants have higher occupant density than offices, warehouses, hotels and other commercial properties. Adding to the challenge: Patrons have high thermal comfort expectations. If the space is too cold or too hot, customers may not come back.

The back of the house presents the toughest challenges. “In a restaurant you have to deal with a ton of heat-producing equipment — refrigeration, holding equipment and multiple types of cooking equipment,” says Chris Buscetta, kitchen designer, HapstakDemtriou+. Ventilation requirements for cooking mean a lot more air has to be passed through the kitchen than in most commercial spaces. “You’re pulling about twice as much air out of the hoods as a lot of the other systems have to deal with,” Buscetta says.

So, ventilation in most eateries is more robust and more versatile than in other buildings. “Restaurant systems need a wider range of capability than most other commercial spaces,” says George Mackenzie, partner, AKF Group. “They also need more fine tuning.”

Though the back of the house requires more ventilation capacity than the front, HVAC in the entire restaurant works holistically. The kitchen needs to be semi-isolated from the dining area. You achieve that ventilation-wise by having the front of the house maintain a slightly positive air pressure relative to the outside air and to the back of the house. This way, air flows from the dining space to the kitchen, and then outside through the hood or hoods. You don’t want the reverse — where air flows from the kitchen to the dining area — because that scenario would shunt smoke and grease toward guests. So, when the front door is open, outside air should flow out instead of outside air blowing inside.

HVAC engineers follow basic standards set by the American Society of Heating, Refrigerating and Air-Conditioning Engineers (ASHRAE). For example, a formula denotes how much air is required for each person in a particular space, which establishes an air flow level. The system must be sized to accommodate a full house during extreme temperatures in your climate zone.

A large island-style hood at Emilies in D.C. provides robust exhaust for the open kitchen. Image courtesy of Anne Kim

Beyond the basic standards, though, engineers must take into account certain attributes of the restaurant — particularly the number and types of cooking equipment. “Deep fryers and char broilers need more exhaust than a griddle that you cook pancakes on,” says Anthony J. Spata, principal, Spata Global Design Group, LLC. Higher temperature equipment requires more robust exhaust. Other factors, such as whether the establishment has an open kitchen or a front-of-the-house cooking space, influence the design. In the former case, a half wall or glass barriers could reduce the required air flow from front to back. A dining space cooking station might mean a dedicated hood will have to be installed above it to clear the air.

Even with proper negative pressure so that air flows front to back, when cooking equipment in the kitchen is fired up, additional air must be brought in from the outside. Makeup air is drawn through the hood system and it is critical to calibrate this feature correctly. When the kitchen is not in use, this feature is turned off.

It is crucial to size the hood correctly for the cooking station or stations. “If you know what the cooking equipment is going to be going into the project, it is easy to size,” Buscetta says. Typically, a hood should hang 18 inches over the front of the cooking appliance, and 12 inches over the side. If the size of the equipment is unknown at the design stage, designers may size the hood for the largest possible contingency.

Hoods that have wing walls — like soffits hanging down on three sides from the hood — are more energy efficient because the wing walls have funnel-like properties directing air more efficiently, Buscetta says. Positioning cooking elements and their hoods along a back wall is best from an efficiency standpoint and reduces the length of venting needed. Some designers also opt to put exhausts over dishwashers to vent heat and steam.

It’s important to note that hood ventilation systems require regular maintenance. A restaurant that cooks a lot of burgers (generating a lot of grease) may need monthly cleaning, Mackenzie says. Grease fires can be catastrophic, so don’t forget to maintain a regular service schedule. Quarterly cleaning is sufficient for most establishments, and places that do little cooking such as sandwich shops may need only annual maintenance. 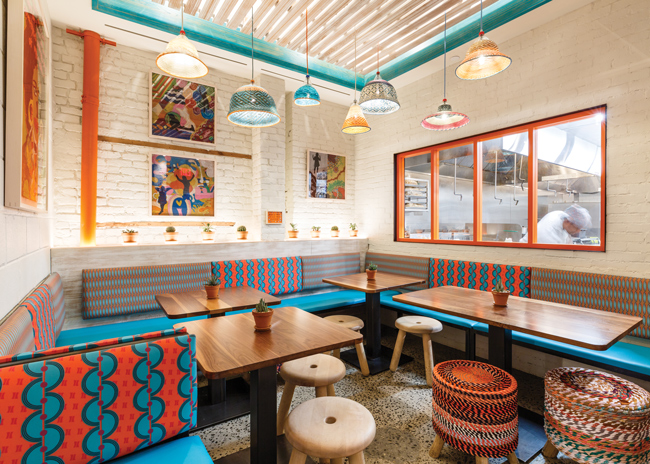 At Lekka Burger in New York, windows provide a peak into the action in the kitchen while also separating ventilation between the dining area and back of the house. Image courtesy of Alex Staniloff Photography

The challenge to keep diners comfortable can be tricky. How often have you sat down to eat at a restaurant when at least one in your party complains of being too cold or too hot? A chief reason for this displeasure comes down to the placement of air vents. When conditioned air exits a vent into the dining space, it blows warmer or colder than the ambient temperature.

“You are combating the heat or cold outside,” Spata explains. Cooled air blows into a room in the high 50-degree or low 60-degree range, he says. This flow is tempered by the ambient air temperature inside; but if it is blowing directly onto a guest, the guest is likely to feel cold or hot. The solution is to position vents so that air from the HVAC system diffuses sufficiently before it reaches diners.

This is not always easy to do. For example, if a vent is placed too close to a structural ceiling beam, the air flow may be shunted down at a right angle onto a guest seat below. Instead, the vents should be spaced, ideally, 6 to 10 feet from any such obstruction, Spata says.

Open ceilings in a retrofit project pose some unique challenges. Typically, HVAC ducts — long arrays of gray or silver sheet metal — are not particularly appealing to the eye. A common strategy is to paint them black or to match the ceiling, so they are less noticeable. Spiral-style ductwork has become popular for open ceilings for a more aesthetically pleasing form than conventional rectangular ducts.

Dining areas open to the outside via garage-type doors or sliding floor-to-ceiling window assemblies present potential problems such as insect intrusion and rapid loss of conditioned air. Air curtains — equipment that blows air from the ceiling to the floor just inside the door or window system — can mitigate these problems. Air curtains can be hidden within a soffit. Just be careful not to place seats directly under these features because guests will not appreciate sitting under such a drafty piece of equipment.

To make a ventilation system work efficiently, control systems adjust the level of air flow to meet changing conditions. During down times, such as overnight and when the restaurant is closed, the system should reduce activity. Programmable thermostats and, in some cases, sensors that measure carbon dioxide levels and humidity govern system activity.

In the back of the house, variable speed hoods have become popular within the past decade. These products cost more than conventional hoods, but prices have come down to the point where the payback in energy savings is often worth the expense, Spata says. Fan speed variability makes them more responsive to the activity level in the kitchen via sensors, and makes them more energy efficient by reducing power consumed when operating at lower speeds.

Occasionally, even a well-designed and fully operational ventilation system runs into problems and needs fine tuning. Mackenzie mentions a recent case where a client experienced condensation dripping onto the floor below from a diffuser near the front door. It took some forensic work to figure out the problem: an unbalanced variable speed hood. “The space was so negative, it was pulling in outside air,” he says.

The culprit was in the kitchen. “It was a hood calibration problem, not a ventilation system problem,” Mackenzie says. This example illustrates how important it is for the entire ventilation infrastructure to work in concert. 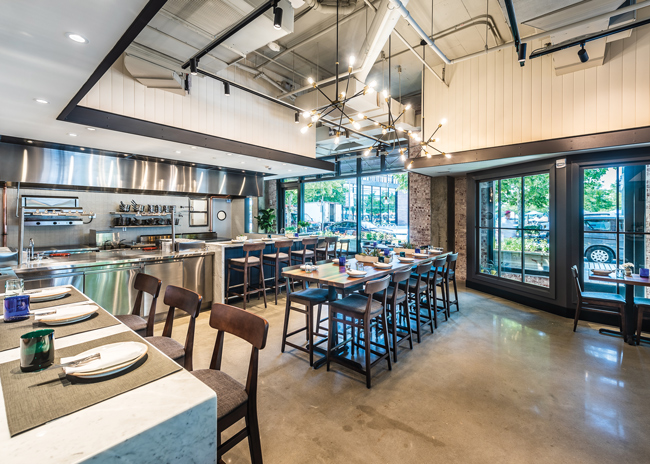 Ventilation may help reduce the spread of COVID-19. “ASHRAE recommends increasing the amount of outside air drawn in as much as the equipment can tolerate,” Spata points out. “This dilutes the air, and thereby the virus lingering in the air. The more outside air, the more dilution.”

Top-shelf air filters can remove viruses from the air. The most widely used filter type was rated at MERV 8, but upgrading to MERV 13 or 14 can reduce the amount of viruses lingering, Mackenzie says. MERV (Minimum Efficiency Reporting Value) is a system used to evaluate the efficiency of air filters. The higher the MERV rating, the higher the air-filtration capabilities.

However, pumping more air through the system and upgrading filters cannot eliminate a virus when an infectious person is in the establishment. “The proximity of person to person is more important than what you do with the ventilation system,” Buscetta says.

Spata stresses that restaurants restarting after an extended shutdown must guard against the spread of Legionella, a bacterium that causes an airborne pulmonary disease that can be deadly. Legionella forms where water pools in ventilation condensate pans and traps. With regular use, the flow of water through these elements prevents Legionella from forming. Left unattended for protracted periods of time, these features can become petri dishes. A skilled engineer or HVAC professional can clean out these elements and apply a biocide to kill any bacteria that has formed. Pans and traps are usually found within cooling units mounted on the roof.

Add disease prevention to your HVAC challenges. Indeed, it takes a lot of effort to make something so important be so unnoticeable.