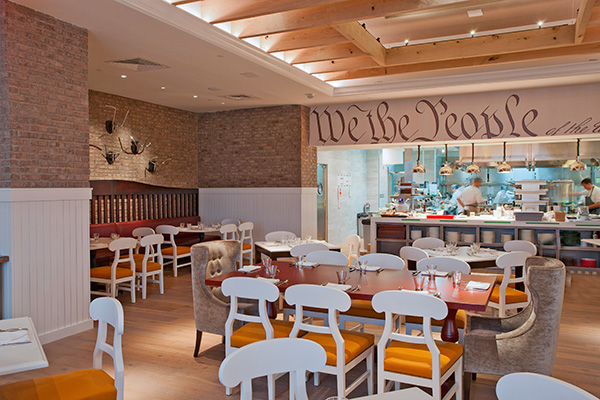 Originally conceived as a temporary collaboration with the Foundation for the National Archives’ “What’s Cooking, Uncle Sam?” exhibit in Washington, D.C., America Eats Tavern now has a permanent home. Created by multiconcept operators chef José Andrés and Rob Wilder of ThinkFoodGroup, the restaurant opened in June at the Ritz-Carlton hotel in the D.C. suburb of Tysons Corner, Va., a fitting locale for an upmarket concept celebrating Americana in fresh, sophisticated ways.

Open for all dayparts, America Eats Tavern introduces guests to an “imaginative interpretation of American culture with a modern twist.” Breakfast, for example, might feature a biscuit with egg, trout sausage, mustard greens, pickled red onions and blueberry catsup. Regular features on lunch and dinner menus include country hams, shrimp and grapefruit cocktail, Cobb salad and fried chicken with “cold slaw.” The raw bar’s marquee features include oysters served on the half shell, grilled or pickled. Wines and beers are all American, and specialty cocktails highlight seasonal and regional ingredients.

As on the menu, the restaurant’s design blends traditional and modern elements to create a contemporary American aesthetic. Vincent Celano of New York-based Celano Design Studio led the effort.

“Any time we design a restaurant, we start with trying to really understand the chef and the food, and work to create a story that brings all of the pieces together,” Celano says. “We had a lot of discussions on food, on the American food culture and how it has evolved. We wanted America Eats to be reflective of José’s playful approach to food. He has this way of deconstructing food and then reconstructing it in a way that’s artful, playful and somewhat surreal but at the same time creates a conversation so you feel like you’re learning through the process. It’s very engaging and exciting.”

Situated off the hotel’s second-floor lobby, the restaurant’s design coordinates with that space while still providing a unique, stand-alone restaurant experience. “It’s integrated into the hotel, and that’s very intentional in terms of the design,” Celano says. “We took inspiration from an existing staircase in the lobby when we developed the facade because we felt it needed to tie in and work well with the other architectural elements in the space. As people come down that staircase, they see the glass storefront and can look through to the back bar, the beautiful wine display and magnum-sized wine taps at the bar. They see all of the energy and activity.”

ThinkFoodGroup took over an existing restaurant space for America Eats Tavern. While its open kitchen worked well for the new concept — only minimal decor and equipment refreshes were necessary — the entire front of the house was gutted and remodeled. Amanda Pittarelli, the restaurant group’s manager of development and design, notes that the biggest change was relocation of the bar from the back of the restaurant to the center. The bar was also significantly enlarged. “We wanted to bring action into the dining room and put that activity closer to the entrance where guests could see it from the lobby,” she says.

With seating for 55, the bar and lounge area features a mix of cocktail-table soft seating and high-tops that seat 6. A large pantry shelf crafted to resemble an eclectic mix of vintage cabinets is positioned above the bar and helps to divide that space from the dining room behind. It’s an example of how Celano’s team used early American motifs, often drawing inspiration from period residential styles, in the overall design strategy. 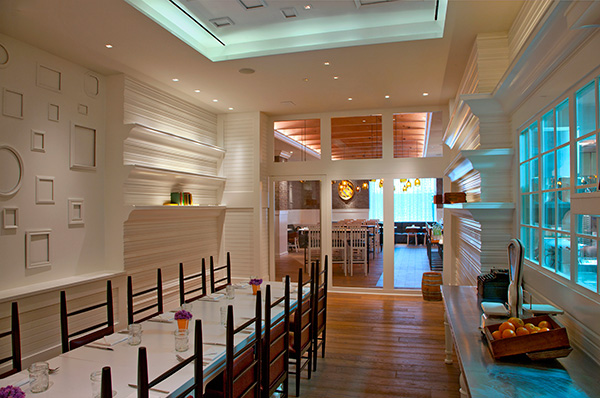 Reclaimed oak floors and walls covered in white, beaded wood wainscoting and exposed brick provide a traditional backdrop for decidedly nontraditional decor touches. Large, framed early American portraits, for instance, become modern art elements thanks to bold blue stripes painted across their surfaces. “The idea was to take the attention away from the actual content, from the image itself, and say, ‘Look, the artwork isn’t just the image — it’s the frame, it’s some of the detailing on the frame, it’s where it’s hung and how it becomes part of the space,’” says Celano, whose team handled the graphics package for the restaurant as well as the design. “It’s the idea of stepping away and creating another conversation, of bringing that early interpretation forward and giving it relevance for today.”

Looking up, guests in the bar/lounge area get another taste of the unexpected. Wooden beams across the ceiling provide a sort of screen for a dramatic, large-format graphic of an American flag that appears to be billowing in the sky above. Celano notes that it’s not just the flag imagery that was attractive. This particular graphic was selected because of the hand that holds the flag. “You can see it’s not just the flag, but it’s being held, engaged with a person so there’s a human connection. It’s also overscaled and makes a large statement,” he says of the image. “But by positioning it on the ceiling and behind the beams, it’s somewhat screened. It’s understated until your eyes are drawn up to the ceiling and you realize it’s a bigger statement than what you initially thought.”

“José likes to create different experiences within the same space by using different sizes, shapes and heights of tables and using decorative/structural elements within an open space,” Pittarelli says. “This was especially important for this space with the hotel guests. We wanted to provide a place where they would enjoy dining multiple times throughout their stay without losing interest.”

An additional straight, red leather banquette is inset along a wall adjacent to the restaurant’s exposition kitchen. It’s used for larger groups or smaller parties as needed, and, like the millwork painted cabinet fronts above the bar, its back evokes a residential look and feel.

“It’s actually a bed headboard,” Celano explains. “That was the inspiration. We wanted to create an element of exploration as you go through the restaurant and notice different things. These details aren’t so obvious at first glance, but when you look again you see, ‘Oh, it’s a headboard or a kitchen cabinet or bicycle handlebars!’ It adds to the experience and provides the layers on which the concept is built.”

The vintage bicycle handlebars are an especially popular design element. Mounted on the wall in the same way antlers might be, above the headboard-backed banquette, they’re an example of the type of playful, abstract vision behind both the design and the cuisine at America Eats Tavern. “We chose these sorts of tangible objects, the elements that evoked the American food culture and juxtaposed them with the sort of whimsical, architectural early American design details,” Celano notes. “It’s fun, but it’s also sophisticated in approach — just like José’s food.”

A Pinch of Surrealism

That approach is amplified further in the design of America Eats Tavern’s private dining room. The room seats up to 18 guests and provides a view into the inner workings of the kitchen through a large residential-style window along one wall. The room’s back wall displays its pièce de résistance, an oversized replica of American artist Robert C. Jackson’s painting “Sugar Overload,” the original of which hangs in Andrés’ home kitchen. Another play on scale, it provides bold and playful imagery in a room that’s otherwise almost entirely white.

“The painting is a kind of abstract, surreal interpretation of American culture, which was the inspiration for the overall design of the restaurant, so it was a perfect fit,” Celano notes.

Other elements within the private dining room suggest a pinch of surrealism as well. Custom-made chairs, inspired by colonial designs but tweaked to look almost upside down, surround the large, white, lacquered table. A collection of painted frames — white and empty of artwork — is arranged against the wall opposite the kitchen as well as on the ceiling. Says Celano, “It’s very surreal in the sense that the picture frames are whatever you want them to be. It’s taking inspiration from early colonial detailing and then using it in a way that wasn’t necessarily intended, so it becomes part of the architecture and encourages conversation.”