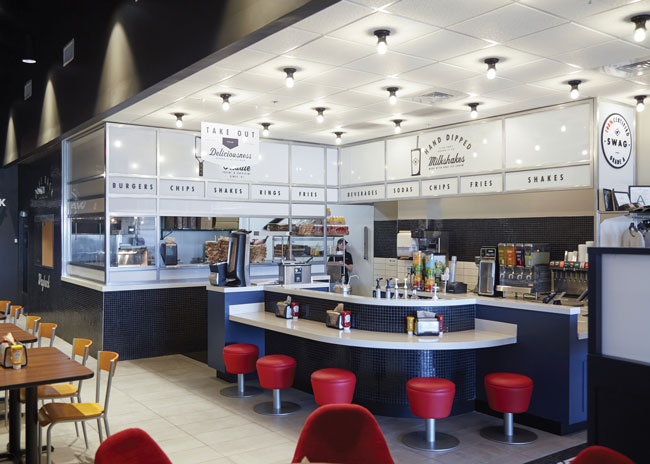 This burger concept has updated its look, but it still aims for an old-time experience.

For Wayback Burgers, the time to update came in 2018. At that point, the fast-casual outlet had gone about 10 years without a new design. Its look needed a refresh, one that could bring in younger guests.

At the same time, the new design had to reflect the company’s approach to food and service overall, as reflected in the Wayback name, says President of parent company Jake’s Franchising Patrick Conlin. “It’s really about taking you back to a time when things were simpler, when things were made correctly and there was a commitment to doing the right thing,” he says.

In terms of food, this trip back in time means high-quality, uncomplicated burgers; french fries; and hand-dipped milkshakes.

This is not new to Wayback. In the chain’s legacy stores, the production line sits right behind the POS counter in full view of guests. Team members, then, would walk from behind the counter to the dining area to deliver food to guest tables. While that elevated the experience at Wayback, it also led to grease being tracked throughout the restaurant.

In the new design, then, the chain has moved the production area to the back corner of the front of the house. With this new location, guests can still see their food being prepared, but food smells and grease tracks in the dining area are limited.

The other new and notable area in Wayback’s new design is a retail space, where the chain sells Wayback Co. branded merchandise. These aren’t just the uniform pieces team members wear. They’re more stylish sweatshirts, T-shirts and hats that people would feel comfortable wearing as they run errands. Offerings also include fun items like stickers, pennants and yo-yos.

While every restaurant wants to keep its square footage as low as possible, the addition of this retail space wasn’t a concern for Wayback. The entire section measures only around 100 square feet, and the chain isn’t looking for larger footprints to accommodate it.

While this new design introduced major footprint changes to Wayback, the chain’s fixtures, finishes and furnishings changed as well. 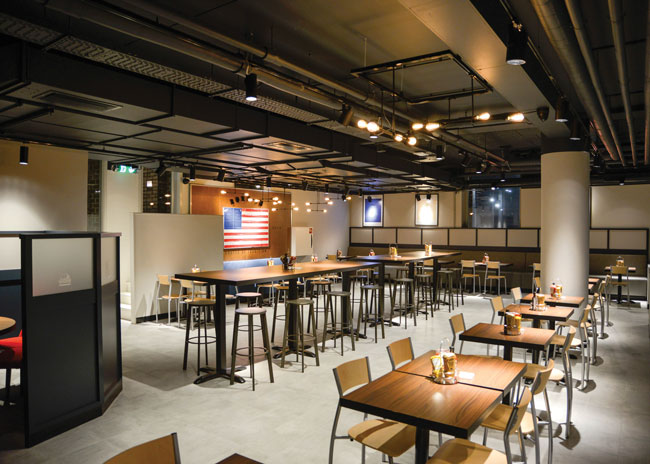 The new design offers floating tables, banquette and community table seating. The community tables may be reevaluated in an age of social distancing.

The new design is lighter and brighter with a more elevated look. Dark floor tile has been replaced with a lighter tan-colored tile. The red barnwood is out, replaced with a small dark blue tile that runs in a band around the walls and can also be found in the entryway, the soda fountain counter face and around the kitchen wall.

There are some lighthearted, borderline cheeky touches to the new design as well. Hanging on a wall is the Wayback Clock, with its hour and minute hands set permanently two minutes before noon, aka lunchtime, while the second hand runs backwards.

Then there are the posters, signage and restaurant rules display. These elements tell guests to be patient, grab extra napkins and clear their tables like Mom would like, all in a fun, lighthearted manner. “There’s a little edge to the messaging because we also want to have fun,” Conlin says. “We want people to smile when they read the different sayings on the posters and the rules.”

For furnishings, Wayback also shook things up. Before, the chain had butcher block-style tabletops paired with metal chairs throughout the restaurant. This new design offers guests a variety of seating options to match their mood and their group. Choices include two types of banquettes, floating tables, and community tables. There’s even a large round table set apart from the rest of the dining area by high partitions. “It’s not a private room, but it’s semiprivate. If you have a decent amount of people, you’re a little walled off,” says Conlin.

While the furnishing package has allowed customers to create the experience they want, it’s also undergoing one of the biggest changes Wayback has implemented since the redesign. The tables first used in the redesign had laminate tops with rubber edges, paired with metal-framed chairs. These ended up looking too QSR for the concept, Conlin says, and are being replaced by a reclaimed walnut tabletop and matching chairs. 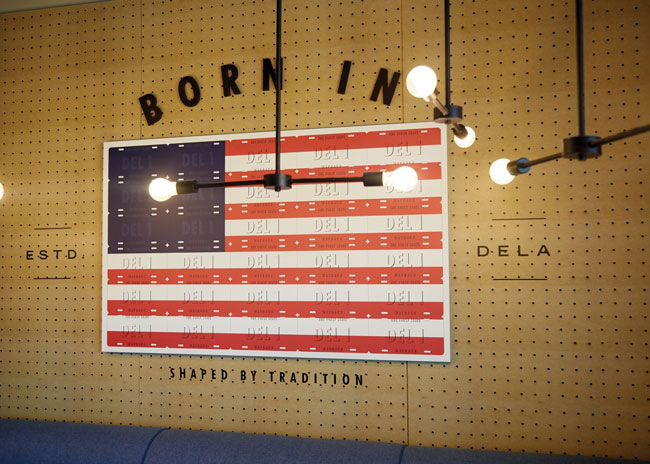 The flag design element is made from old license plates from Delaware, the chain’s original home base.

While the furnishings represent the biggest change driven by look and feel, Wayback is also considering making some major adjustments for a world impacted by COVID-19.

In the front of the house, one of the biggest questions is the communal table. Its ability to serve large parties or multiple small parties in densely packed, high-energy space has made it a popular feature in both fast-casual and casual-dining restaurants.

At a time where social distancing is recommended and low density is often mandated, a communal table might not make sense for new Wayback locations, according to Conlin. “Post COVID, that’s something we have to think about, whether that is going to be in the short-term or any long-term design,” he says.

Other design changes Wayback is considering are more operational. The chain’s existing design accommodates online and delivery orders with a three-bay section under a heat lamp. With so much more of the chain’s business now off-premises, Wayback is looking to add more capacity to the area. A change is not certain, though. While to-go orders were the only game in town for several weeks, the chain wants to look at customer behavior going forward before making any big changes, says Conlin. “Whether the takeout aspect will continue as high as it is now as the country reopens fully is something we’ll have to look at,” he notes.

Another operational change being studied is the use of drive-thrus. A handful of Wayback restaurants currently offer drive-thru ordering and are successful doing so. Nevertheless, this type of business is challenging for the Wayback concept, Conlin says. With ticket times in the six- to eight-minute range, Wayback drive-thrus need plenty of space to queue cars. In addition, the company will need to find ways to manage customer expectations for speedy service and possibly shave precious seconds off ticket times.

To explore this model, Wayback has reopened a long-shuttered drive-thru at one of its company-owned restaurants. This will allow the chain to fine-tune drive-thru service and see just what is possible without asking franchisees to invest in an experiment. 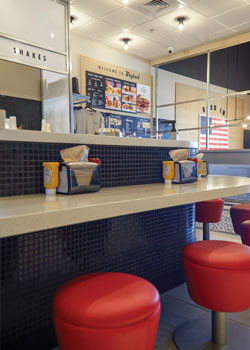 Wayback went for an elevated look with small blue tiles around the soda fountain, kitchen and other spots in the restaurant. The seats are real leather.Delivery Food Trucks

Drive-thru isn’t the only experiment Wayback is conducting with its own dollars. The chain is also working on version two of its delivery food truck offering, developed around the same time as this new prototype.

The original idea for these trucks, says Conlin, was to have them work in conjunction with the chain’s brick-and-mortar restaurants. The truck would drive through the restaurant’s service area, acting as a roving billboard.

When a customer would place an order on the app, “the truck would come to your house or your office. The driver would go back to fulfill your order and then bring it to your door, hot and fresh just like you got it at the restaurant,” Conlin says.

This model addressed two problems with delivery burgers, Conlin states. First, french fries simply don’t travel well. Cooking them in a truck just feet from the customer’s door meant they got delivered crisp and hot. Second, it allowed the chain to offer delivery without giving 25% to the delivery company.
Perhaps this model would allow the chain to do delivery better and cheaper than the Grubhubs of the world.

While the food quality and customer response justified Wayback’s thinking, the company ran into logistical issues.

First, the truck Wayback developed wasn’t your standard food truck. A full-size truck, says Conlin, isn’t really mobile in practice. These vehicles park and stay in one place for long stretches of time, while Wayback wanted something that would be on the go from one burger to the next.

The chain, therefore, developed an electric truck with a kitchen in a small camper-like space that could fit two people at most. At that size, volume was somewhat constrained. More troublesome was the truck’s speed. The vehicle, says Conlin, “was like a souped-up golf cart. It really topped out at 20, 25 miles an hour. That was a limitation.”

The bigger issue, though, came up with the landlords of the Wayback restaurants that served as the trucks’ home bases. Property owners had issues with a commercial truck in the parking lot, with particular questions surrounding cleanliness. While the trucks need cleaning and washing daily, landlords didn’t want that to take place in their shopping centers.

Version two of the chain’s food truck is currently under development and should roll out in the next few months. This truck uses a gasoline engine and has a slightly larger kitchen, allowing it to produce more volume. More important, though, the chain plans on basing this new truck not at a restaurant but out of a commissary kitchen. “Every night it goes back, it can pull into that kitchen’s parking lot, get cleaned out, sanitized and then gets restocked the next day,” Conlin explains. “If it gets very busy during the day, it can go back [to the commissary], get more supplies and then go back out.”

The company is currently working out the details of the operation and expects to roll out these new trucks in a few months. If successful, the chain will then make it available to its franchisees. 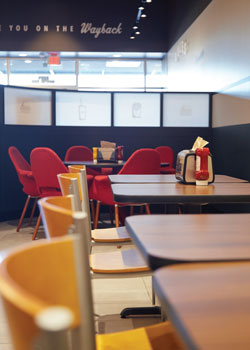 However the latest iteration of its food truck goes, Wayback’s future isn’t hinging on it. Even in the wake of COVID, the chain expects to post solid growth in the near term. Domestically, this includes eight new restaurants in 2020 (about half of what was forecast at the start of the year) and 15 in 2021. Overseas, Wayback has master franchise agreements in several regions, and it expects to open six to eight international locations this year and five to ten next year.

Not only is the chain developing new locations, but it is also in the process of retrofitting its current stores to its new look. The chain, says Conlin, will work with franchisees to develop upgrade packages that meet the store’s needs and the franchisee’s budget. This, too, has been slowed down by the virus.

While in some cases, these efforts have been slowed by the virus, in others, Wayback has taken advantage of the delay by upgrading furnishings, paint and other elements.

The lockdown has also let the chain gather data on these facelifts. So far, says Conlin, three restaurants have been refurbished, and all three have seen increased sales afterwards.

Such figures, combined with positive feedback from guests, have the chain convinced that its new look is the one to take into the future. Somewhat ironically, the one franchisee who owns both an old and new store feels zero nostalgia for the retired look, Conlin says. “I went to visit her maybe three or four months after she opened up,” he says. “I asked, ‘What’s your take? What do you miss about old design?’ She said, ‘Nothing. I’m positive I wouldn’t do the sales volume and attract the kind of guests that I’m attracting if I had the old design in this new location.’”