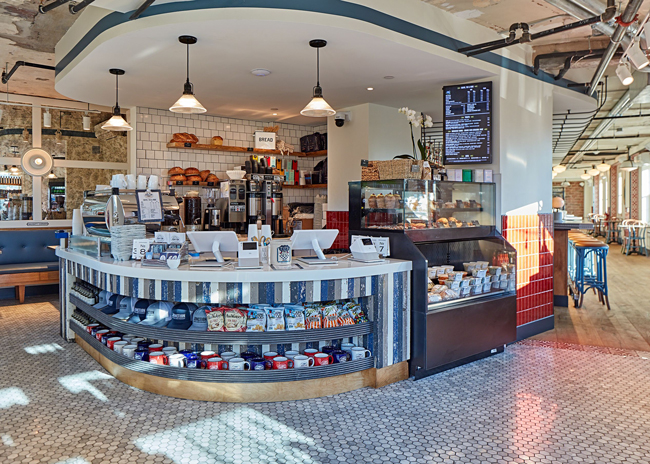 The Junction Bakery concept boasts three locations in the Washington, D.C. area. All offer coffee, baked goods and a quick bite to eat. The operations, though, have all been given their own personality, with room to meet what the neighborhood wants.

During the pandemic shutdown, The Junction’s Capitol Hill location has maintained its retail sales, offered curbside delivery and even meal kits. In normal times, the operation is meant to reflect life and work on Capitol Hill, says David Shove-Brown, partner at architecture and design firm //3877.

“Everybody sees the shiny spaces, the main rotunda under the capitol Dome. But really what makes Capitol Hill tick are all the people that work in Capitol Hill, the behind-the-scenes folks. We wanted to create the architectural version of that. Let's show how the space works, but not in a forced neo-industrial way. Let's just show how things go together.”

This approach is evident upon walking into the operation. Overhead, guests see an unfinished ceiling with exposed pipes and ductwork. Notably, these aren’t show-worth versions of such elements. They’re simply the materials themselves, says Shove-Brown.

Other raw elements are more subtle. Some tile pieces behind the coffee counter, for instance are slightly askew.

“Because we were working with an existing space, we had some areas where things were a little bit challenging in terms of the wall and the quality of the substrate. In some instances, we played that up. You pull the tiles in or out and you get some interesting shadows and an interesting play of perfect and imperfect.”

The handmade feel of the cafe area extends to its tables. These custom-made pieces use tile cut into different shapes and assembled as a mosaic — another example of perfect and imperfect coming together, Shove-brown says.

The front area also includes a small retail component where customers can purchase pasta, olive oil and similar items. These shelves are built into a rarely seen accessibility feature: a motorized lift that can take people with mobility issues from the front of the house directly to the outdoor patio. While the restaurant also has an outdoor ramp to the patio, this lift makes use of an existing door. 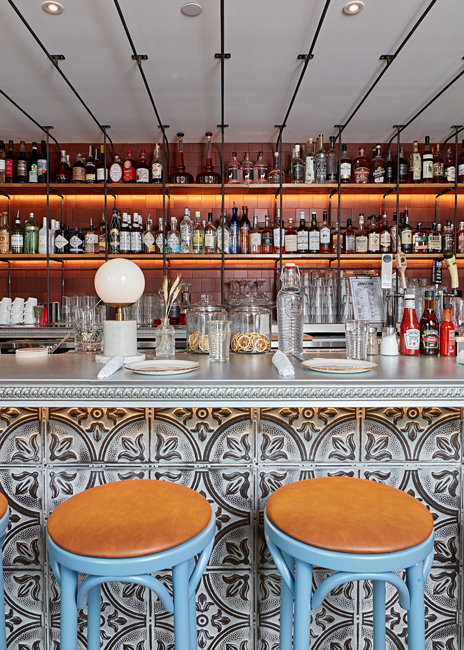 The retail counter in the front connects with Junction’s bar toward the back of this long narrow space. This allows team members to slide back and forth to lend each other a hand when business is booming.

Here, the design concept can be seen in full. The backbar shelving and bar foot rail are both made with rebar. The same material is seen overhead, serving as a structural element for the ceiling.

At the same time, the bar itself is filled with touches that connect to the neighborhood of Capitol Hill and its residents, including the ornate edge of the zinc bar top and the patterned tiles on the bar face.

“That front tile [references] a lot of the Capitol Hill townhouses that have Victorian ornamentation, tin ceilings or rosettes around pendant fixtures. It lets people feel [the restaurant] is part of home,” says Shove-Brown.

The final major front-of-the-house space is a semi-private dining room. The designers originally thought of making it an entirely private space, maybe even one where political deals could be cut. A fully private space wasn’t feasible, so it became a place families and large groups of friends can gather.

The furnishings in the space contribute to that vibe, with a “big chunky table” and chairs painted so that they don’t quite all match, says Shove-Brown.

“There was a little bit of fun putting them together and making it feel like you inherited a dining room set from your grandmother that she had inherited part of from somebody else. It wasn't a total yard sale because it was all in the same family, but at the same time felt home and comfortable.”