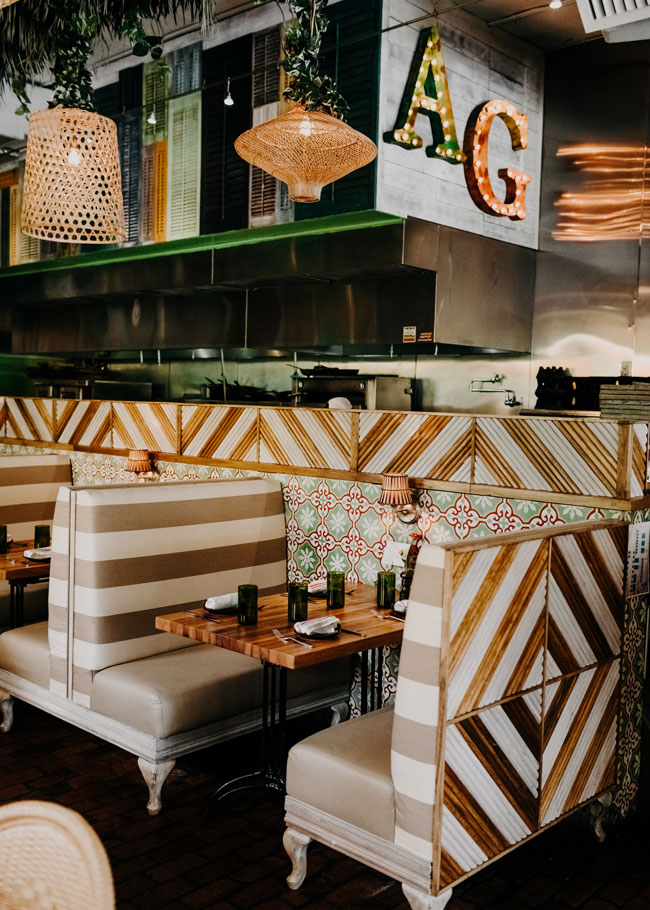 The restaurant opened its doors in West Palm Beach, Fla., five years ago, with Chef/owner Julien Gremaud at the helm. Since then, he’s opened a second location in Palm Beach Gardens, Fla., as well as brainstormed ideas on how to make these spaces work better.

The result was a redesign of the West Palm Beach location that rolled out this past summer. “The kitchen is in the middle of the dining room. For the past five years I've looked into the dining room while cooking in my kitchen. The ideas came together.”

One of the redesign’s main goals, says Gremaud, was to make the restaurant feel more beachy. This can be seen in the changes to the booths, which were given gold and white cloth backs and tan vinyl seats. The restaurant also put in new hardwood tables in the booths, and through the operation, going with a lighter tone wood that’s more on theme.

Monday, let’s do this!

Another addition to the booths satisfies both form and function. These seats, says Graumaund, are next to the open kitchen, where they could be impacted by smells as well as sounds. In response, the chain added bamboo dividers to the top of the half-wall between booths and the kitchen area.

Laid out in a chevron pattern and painted in gold and white, these dividers help block the sounds and smells of the kitchen while also concealing some of the activity. “Before you could see everything in the kitchen. People love the action but you don’t want to show too much.” 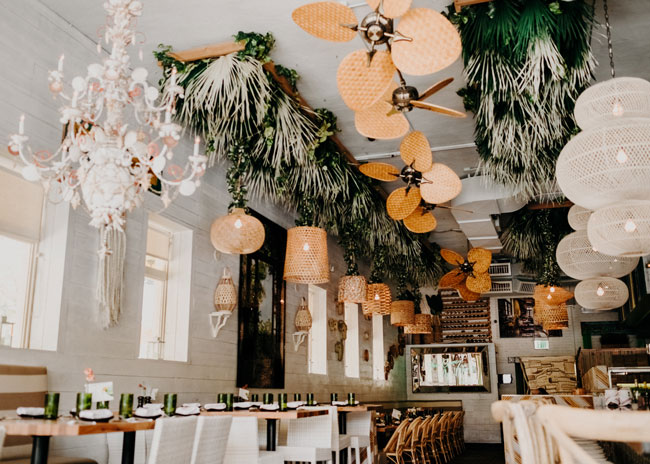 Another new design element combines the practical with the aesthetically pleasing. Avocado Grill’s open kitchen adds energy and excitement to the space, but could also contribute to excessive noise levels on a busy night. 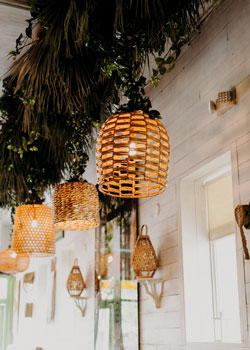 Previously, this was addressed partly through sound panels on the ceiling. Now, the restaurant has plastic palm fronds hanging from custom latticework on the ceiling. These help break up the noise, as well as contribute to Avocado Grill’s beachy feel.

“We have a very high ceiling in the restaurant,” Gremaud says. “The fronds help with the sound and give us a very fresh, organic look.”

In addition to creating a better environment for the diners, the remodel helped Avocado Grill on the business end. In the previous design, the restaurant had a large community table capable of seating 12-14 people. Since, “you don’t get parties that big very often,” Gremaud says, that table has been removed in favor of two six-seat hightops, increasing the number of usable seats on a busy night. In the case that 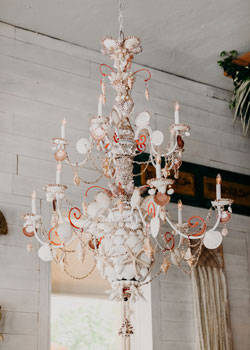 The restaurant’s beach theme comes through loud and clear with other design elements, particularly the custom-made seashell chandelier. The piece was made by a local artist who worked on it every day for a month. By Gremaud’s estimation, it contains more than 50,000 shells.

“It’s not the centerpiece of the restaurant but it’s a very nice touch. It gets a lot of play on social media,” he says.

With Rattan a common material for beach furniture, Gremaud also worked that material into the design. He purchased wicker baskets at shops around Florida, then had them turned into custom light fixtures.

“I believe in giving business to the community instead of to major companies like Amazon. We do the same thing with our food. We try to use as much local produce instead of big distributors,” he says.