Restaurant guests are fishing for their dinner, swimming with the fishes and learning about the importance of a healthy oceanic environment. These are all reasons why seafood specialists are jumping into fish tanks in a big way. These are not little 5-gallon jobs with a lonely goldfish but massive aquariums holding thousands of gallons and hosting exotic sea life from sharks to starfish.

Obviously, there are some design challenges to these projects, from reinforcing floors to hold the weight of all that water and the intricacies of its plumbing to the expertise and maintenance required to keep sea life swimming. But, say operators who have taken the plunge, the effort is worth it. 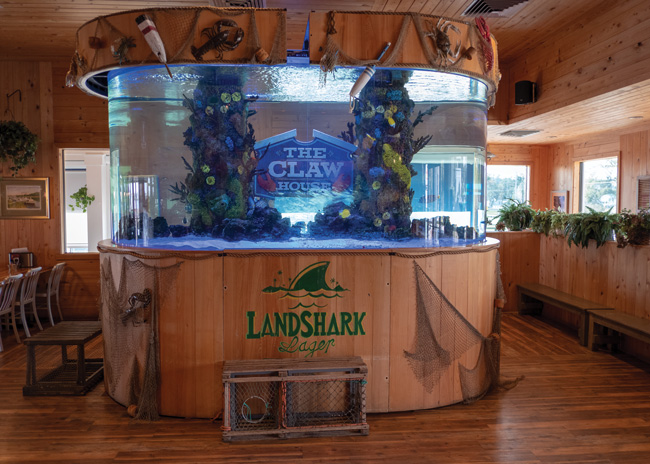 The Claw House is located on a half-mile-long wooden boardwalk along a natural saltwater estuary, which is a big tourist draw. From Memorial Day through Halloween, there is intense competition along this restaurant row. This 300-seat restaurant has an average two-hour wait for a table.

“We are a high-volume restaurant. The aquarium is a signature attraction and keeps guests occupied and happy while waiting,” says Campbell. “We don’t lose customers to the competition.”

The aquarium was part of the restaurant’s original design since it opened three years ago. The owners drew up plans and solicited bids for the project, and Campbell got a call from Brett Raymer at Acrylic Tank Manufacturing, one of the companies under consideration. At the time, Campbell wasn’t aware of the Animal Planet reality TV show “Tanked” and was surprised when Raymer, one of its stars, suggested pitching the project for an episode. “TV scouts came to check out the site while we were constructing the restaurant,” recalls Campbell. “We did the show, and it was great marketing for our restaurant.” “Tanked” fans come in just to see the shark tank — and usually stay for dinner.

While guests marvel at the aquarium, restaurant staff joke that it’s not even the biggest tank in the restaurant. Because The Claw House sources live North Atlantic lobsters, there is a bigger triple-tier live-hold tank in the kitchen. “That’s unique around here, and sometimes we will give a back-of-the-house tour,” says Campbell. 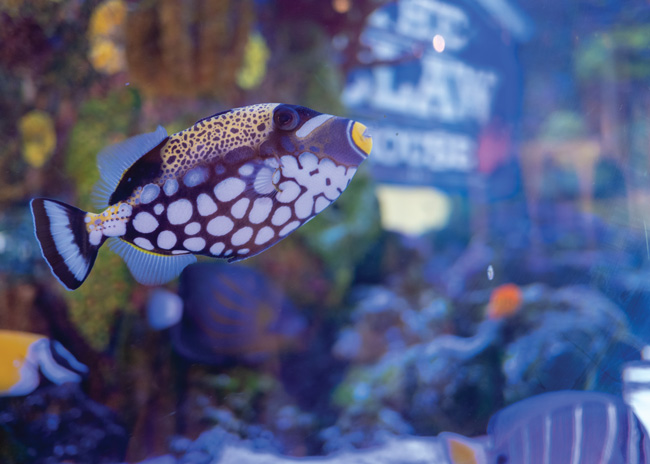 The project concluded beautifully, but there were a few hiccups along the way.

The original design called for the aquarium to be surrounded by built-in bench seats. “We were about to greenlight it when we realized that was a silly design,” recalls Campbell. Because then customers would be sitting with their backs to the tank and blocking the view for other guests. The redesign switched out benches for an access point to the plumbing. Freestanding benches face the tank with about 5 feet of separation for better viewing.

The flooring underneath the tank was heavily reinforced to handle the weight load. However, the team neglected to consider the 30-foot distance from the front door to the installation spot. When they rolled in the tank for the installation, the floor started cracking. “The tank almost fell through the floor,” says Campbell.

Filming stopped at that juncture, and the team spent two days fortifying
flooring joists before the cameras could roll again and the installation could proceed.

The Claw House features water views from every seat in the restaurant; a large, climate-controlled outdoor deck; and a 30-seat horseshoe-shaped oyster bar. Naturally, the decor theme is nautical, with nets, lobster pots and fake lobsters on the walls. Says Campbell, “We wanted to have a few real live lobsters in the tank — but they would have been devoured pretty quickly.” 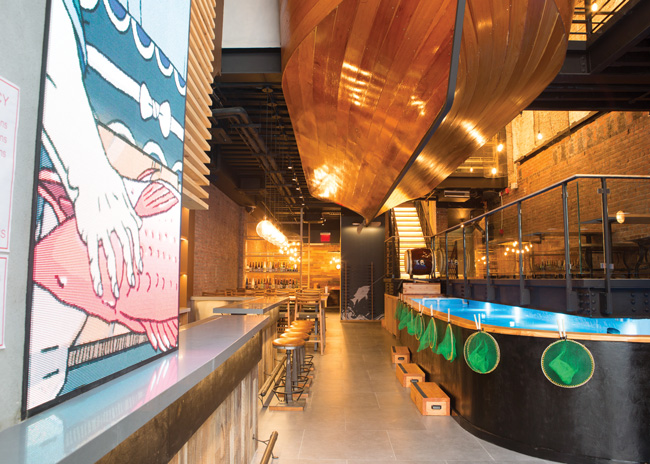 A handmade cedar boat dominates the first floor interior of Zauo. Image courtesy of ZauoCustomers fish for their dinner at Zauo. The restaurant’s guests are provided with fishing rods (and ponchos) and may cast their lines into one of three pools stocked with different varieties of fish. Once they hook one, attendants net the fish and then celebrate by beating traditional Japanese taiko drums and applauding. The catch is whisked away to the kitchen, where it is prepared; options include grilled, simmered in soy sauce, sake-steamed and tempura.

Zauo is owned and operated by Harbor House, a company founded in 1986 in Fukuoka, Japan. Originally a clothing fashion company, Harbor House decided to open a restaurant. To create a unique and fun dining experience, they built a large boat inside, then added fish pools and eventually let guests catch their own fish. Now there are 13 locations in Japan. Zauo New York is the first outpost outside the country.

“When I visited Tokyo to research Zauo’s concept, I saw customers’ excitement on their faces,” says Jihwan Lee, an interior designer at Brooklyn-based Blank Creations. “A father was teaching his children how to catch fish. Friends were having a competition of who will catch the biggest fish.”

The signature design element of each Zauo is a giant cedarwood boat custom-made by Noriki Takahashi, chairman of Zauo group. For the New York location, Takahashi flew in from Japan with professional carpenters. “I pushed this element by lifting the boat up, creating a ‘diving in the ocean’ experience,” says Lee. Upon entering the restaurant, customers see the sailing boat floating above them, surrounded by moving waves displayed on a huge 22-foot LED screen, and the waves are echoed in 2-story-high, Japanese woodblock print-style artwork.

During construction, the hundred-year-old building’s bricks were exposed. “The texture and color of old bricks are very unique and helped to create a rocky harbor feeling and at the same time also harmonized with the boat’s natural satin-finished cedar wood,” notes Lee. Decor combines modern lighting fixtures with antique fishing nets, rods and reels as well as smaller wooden boats. 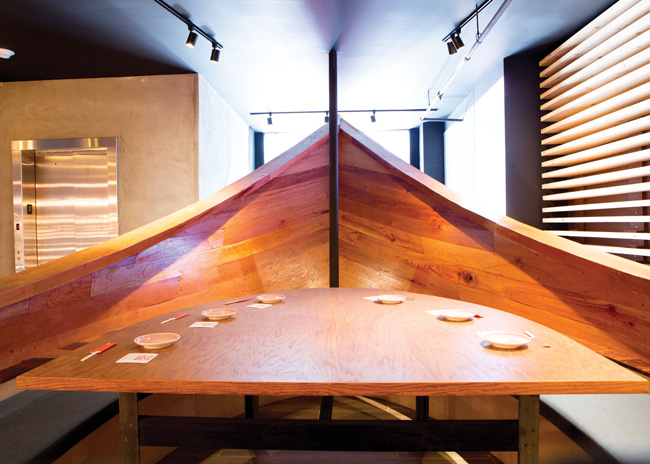 A cedar boat serves as a unique seating area on the second floor. Image courtesy of Zauo

Zauo New York is housed in a narrow storefront building, three stories tall, about 7,000 square feet, including the basement. There are three tanks, each with different varieties of fish. The ground-floor tank holds 1,600 gallons, with 86 seats for dining; the second floor accommodates two tanks, 900 gallons and 700 gallons, with 48 seats. When they enter the second floor, guests can walk across a gangplank and board the giant boat, which serves as a dining area. The top floor is a 42-seat private dining area.

A big challenge was finding room for the three tanks’ water filtering and cleaning system, which required three half-size tanks and about 300 square feet of extra space. Usually these filter tanks are located adjacent to the fish tanks, but this would cut into the New York location’s limited dining, fishing and kitchen space. Instead, a custom-made system allowed the filter tanks to be installed in the basement, freeing up valuable dining real estate on the upper floors.

Another challenge during construction was the storefront, relates Lee. The initial design called for a 23-foot-by-8-foot glass front without any horizontal break lines so that the giant boat would be visible from outside. However, an existing steel beam could not be removed because of the old building structure. “At the end, we made a little twist to the original design by using the building structure beam as one of the core design elements for the gate, which is now an entrance awning,” explains Lee. “And the iconic boat can be viewed from the street.” 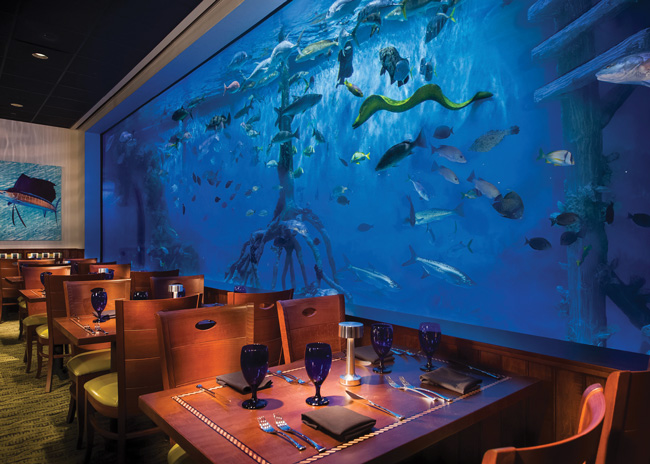 Diners can observe the antics of indigenous fish through a six-inch-thick sheet of acrylic. Image courtesy of TradeWinds Island Resorts“It’s an immersive dining experience — no pun intended,” says Keith Overton, president of TradeWinds Island Resorts. RumFish Grill was created by the environmentally conscious company as a destination restaurant to educate guests about the importance of sustainable fisheries in Tampa Bay and the Gulf of Mexico. The main showcase is a 33,500-gallon saltwater aquarium that encompasses an entire wall of the 150-seat dining room and is populated by indigenous snook, snapper, grouper, tarpon, stingrays and even a green moray eel. With a price tag of a million dollars, the huge tank was also designed and constructed by the stars of the series “Tanked” and featured in an hour-long episode.

Besides dining aquarium-side at RumFish Grill, guests can snorkel in the giant tank twice daily. There is also a behind-the-scenes tour. A five-person crew manages the tank full time. A purification system cycles the water once every hour, all 33,500 gallons. Divers scrub the interior twice a week and polish the glass where the fish rub up against it.

Those divers also entertain guests during birthdays, anniversaries and other special occasions. “If someone intends to propose marriage, a diver will hide on the bottom of the tank before customers sit down,” explains Overton. “Then at the right moment, the diver pops up with a sign saying, ‘Will You Marry Me?’”

There were a number of challenges inherent to the project, says Overton. One was the time constraints of readying the restaurant for its TV debut. “We built the whole restaurant in just 91 days,” he says. The building was originally a convention center on the resort grounds, which was gutted for the conversion to a 13,000-square-foot restaurant, which also includes a 150-seat bar area inside and on an outdoor deck.

Trying to source a piece of clear acrylic to front the giant tank was the biggest challenge. “No one could produce a 4-inch-thick piece of acrylic that size that quickly,” says Overton. The team discovered two pieces of 6-inch-thick acrylic in Italy, already made, an order a customer had canceled. “We put the acrylic on a 747 jet and flew it to the States in order to make the deadline for the show, scrambling at the end to make it all come together.”

Supporting the combined weight of the tank and water was another challenge. “The tank is built with more rebar than a skyscraper,” says Overton. The flooring had to be reinforced with 36 25-foot-deep pilings.

Another concern was visitors flocking to visit the attraction and disturbing diners enjoying a high-average-check meal, notes Overton. The designers skirted that situation by installing a tunnel through the tank from the side. Guests can experience the tank without necessarily dining there.

In addition, there are specialized tanks in the venue. There is a juvenile tank for raising fingerlings, which then move to a middle school tank before graduating to the big tank. In the bar area, a predator tank showcases invasive species like lionfish. And there is a touch tank where guests get close and personal with starfish and other crustaceans.

RumFish Grill’s decor has a saltwater theme, with paintings from specialists like Guy Harvey and Thomas Crouse as well as mounted fiberglass fish. Available at every table, iPads educate guests about different species and environmental issues.

Adjacent to the restaurant is a huge retail store, featuring merchandise centered around the saltwater experience.

The project has been a phenomenal success, says Overton. The return on investment was just four and a half years.