New York-based Tao Group operates see-and-be-seen restaurants and nightclubs on three continents. One of the company’s latest ventures is Tao Chicago, located in a granite-clad Romanesque Revival-style building constructed in 1892. 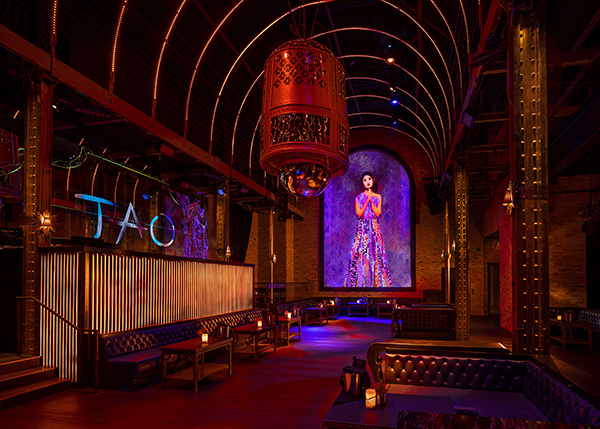 In keeping with Tao’s goal of being a destination spot, the nightclub is filled with eye-popping design elements, many of which take advantage of the space’s impressive 40-foot ceiling.

At the center of the room, for instance, is a 10-foot-tall “disco bell” that holds the club’s disco ball. The bell element is clad in bronze and inspired by Japanese prayer wheels — one of the operation’s many Asian-inspired design touches. The ball inside moves up and down the bell, casting light at different spots throughout the club.

Above the bell are a series of LED arches, many of which are built into the building’s own structural arches. These lights can be set to pulse along with the music coming from  the DJ booth — which is also fronted with vertical LEDs and has the club’s name on the back.

On the back wall of the space is another signature design element: a 20-foot mural by the British street artist Hush. “We actually have projection mapping on the wall of that mural,” says Susan Nugraha, Tao Group’s director of design. “We can add patterns, we can make her dress change from green to red to blue. It’s a cool design element and people are impressed by it.” 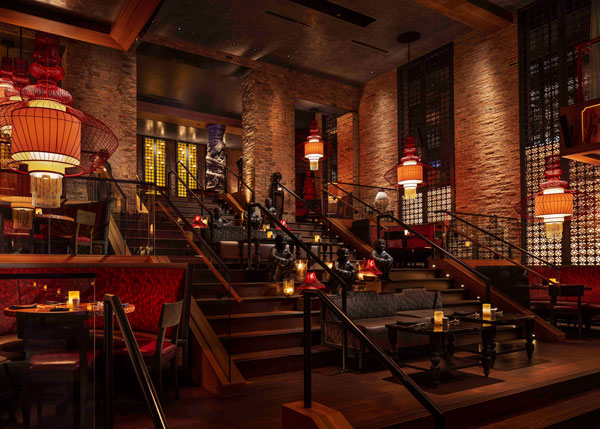 If guests choose the restaurant instead of the nightclub, they’re greeted with an equally impressive vista, The Grand Staircase that leads down into the dining room.

Getting to the staircase itself sets up the reveal, says Nugraha. Once guests pass the restaurant’s host stand, they walk through a narrow hallway before opening the doors to the staircase. There they’ll find more Asian-inspired design elements, including squatting man sculptures and lantern-style light fixtures. Patterned metal screens on the walls and columns are reminiscent of Asian latticework, while several are backlit and have acoustical material behind them to help control sound in the restaurant.

Not just a way to get from point A to point B, though, the staircase also has table and lounge-style seating.

“We wanted your descent into our space to be an incredible experience not only to walk through but to eat at,” says Nugraha. “We have round banquettes on either side of the stairs as well as a sofa dining experience in the middle.” 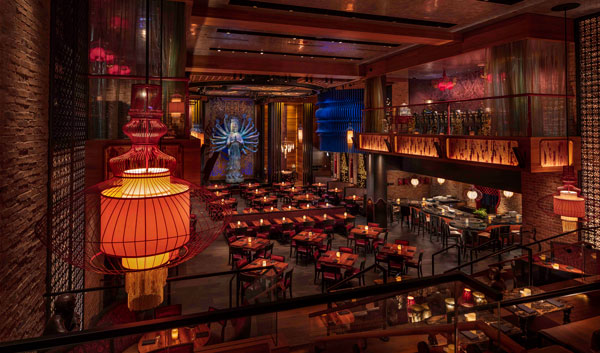 Like the club, the restaurant is a large space with high ceilings. It seats 275 guests. The dining room is filled with mainly floating tables though a banquette in the middle and booths on the side help break up the room and offer variety.

Toward the back of the restaurant is the operation’s signature piece, a 16-foot statue of the multi-armed deity Quan Yin. As with the Hush mural in the nightclub, the operation uses projection mapping on this feature, this time profiled to the shape of the stature itself.

“There’s this graphic moss that grows on her like she’s a Cambodian deity from Angkor Wat. Her eyes will pan across the room and wink at you. There are little, subtle moments we create with the Quan Yin that add to the story,” Nugraha says. 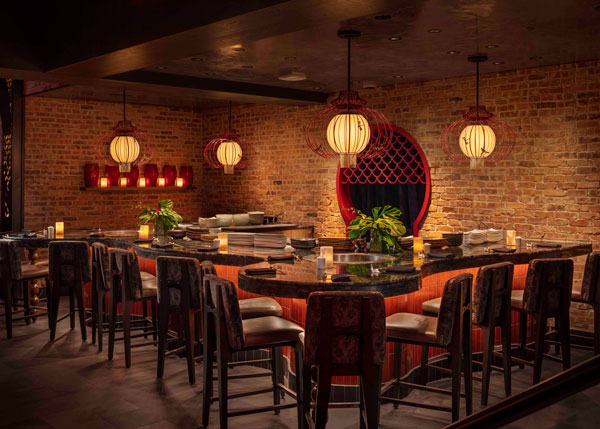 In addition to standard seating, the restaurant two private dining rooms and a sushi bar.

The sushi bar, located on the restaurant’s right wall, features more lantern-style light fixtures and a scalloped doorway to the kitchen, hidden by a black curtain.

The bar itself, an an amoeba-style shape, features wells for showcasing fresh seafood. “Typically when you go to a Japanese sushi counter, it’s really enjoyable only for two people. You can only talk to the person next to you. We created a round tabletop so people can enjoy [conversation] among four or so people while you’re still seated at the sushi bar,” says Nugraha. 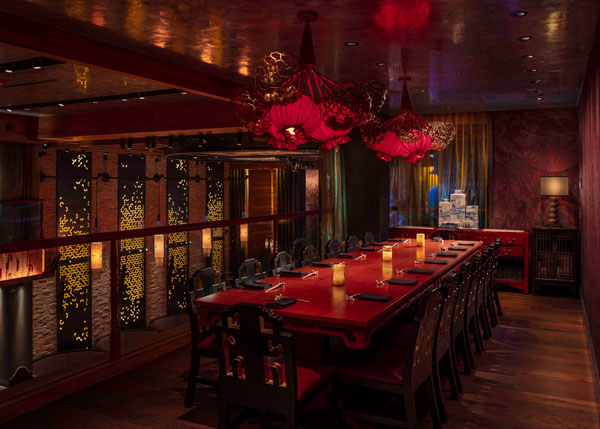 While the sushi bar is off to the side, the private dining spaces are on the mezzanine. These rooms feature many Asian-inspired elements including custom-made lotus-esque light fixtures and burgundy wall coverings featuring a landscape of peacocks and flowers.

According to Nugraha, the company wanted the private dining rooms to take advantage of the building’s impressive dimensions. “We like the theater of the space and really wanted to create this sort of opera skybox seating,” she says. “They’re as private as you get with your own room, but you get to overlook the energy and activity of the dining room. They have a great feel.”