Heritage Salvage is a reclaimed building materials and custom design and build shop on three acres in Petaluma, Calif. It offers roughly 250,000 board feet of wood in its yard, which includes flooring, siding, beams, ceiling treatments and architectural elements.

Michael "Bug" Deakin's passion for wood and reclaimed materials began in 1970 and his company's motto is "If you can draw it on a bar napkin, we can build it." The company has supplied wood to more than 70 restaurants in the Bay Area. 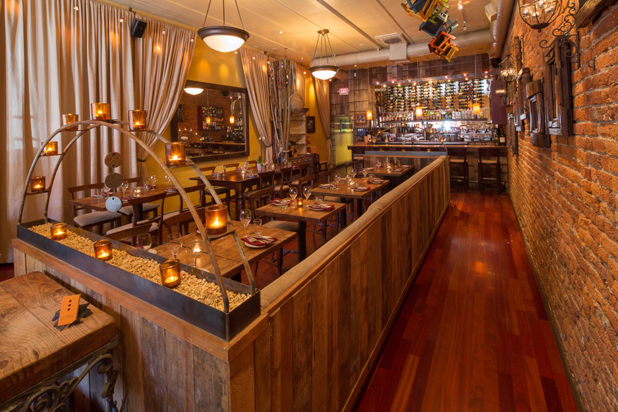 rdD: How did you get you started supplying materials and building restaurants?
MD: It's interesting that restaurants became such an integral part of Heritage Salvage because the first restaurant I built was Risibisi in Petaluma, and since then we've done over 70 restaurants. The cool thing about restaurants is that it's a beautiful way to get the word out: It's like having 70 showrooms in the Bay Area, only you can dine at every one of them. 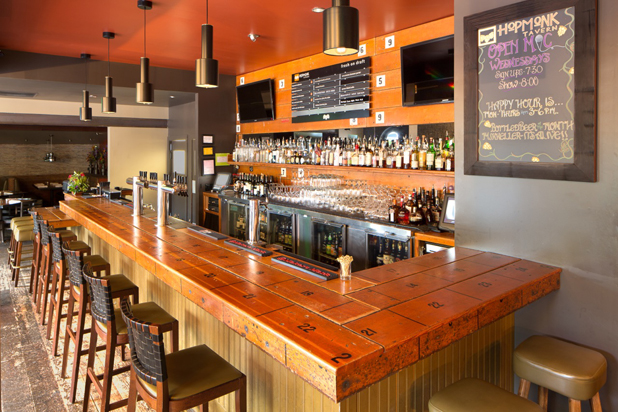 It seems that restaurant people talk to restaurant people, and they love to go into a restaurant that just opened to see it. At Heritage Salvage, more often than not, it's the restaurant owners that walk in the door [because they saw our work in another restaurant]. For example, we've been working with Dean Biersch, who with Dan Gordon started all the Gordon Biersch shops around the country. Dean now has three Hop Monk Taverns that he did on his own. When we finished his Sonoma location, Sondra Bernstein, owner of The Girl and The Fig, went over to see it and she asked Dean where he got his bar and tables. The next day I got a call from Sondra and she said she wanted to redo her patio. 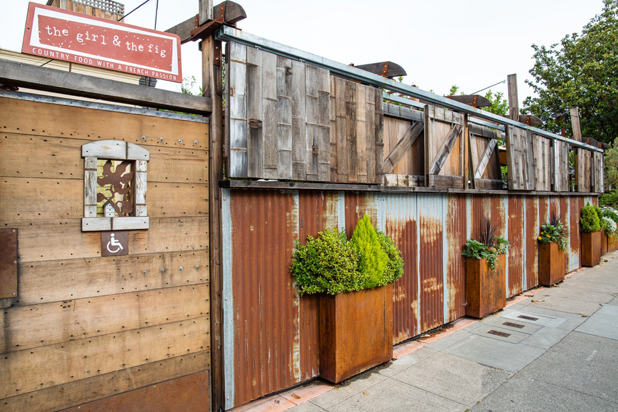 Girl and the Fig exterior

She said, "We don't need a designer do we? You've done over 40 restaurants!" I said I love designing and so we sat down and started drawing up plans. Sondra's adept at AutoCad and we designed her new patio and how it would be laid out. There's been no looking back since we started doing restaurants.

rdD: What do you think is driving the current increase in the use of reclaimed building materials in restaurants?
MD: I believe that the slow food movement and sustainability in restaurant food — the farm-to-table movement, etc. — has helped drive the desire for restaurateurs to also be sustainable in their environments and in the materials they use for their restaurants. And there is a warmth that comes from using reclaimed building materials in a restaurant that becomes very inviting for the patrons, too. 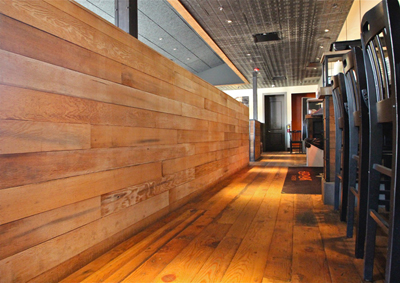 rdD: What are some restaurant projects you've worked on recently?
MD: When Biersch took over his new spot in Novato it had it had been built out as a brand new restaurant but they went bankrupt before they could launch. He called and said, "Bug, you gotta get down here and we gotta take the polish off this place."

So we walked in, looked around and saw the concrete floors and he said "This is what we gotta do first, right?" I said yes and we put in 4,000 square feet of reclaimed wood flooring and it immediately warmed up the place.

Plus, it really changed the acoustics. Using wooden floors and wood as siding and wainscoting really does change the acoustics in a restaurant. Flooring is one of the first things people add.

One of the things we love specializing in is wooden slabs with a live edge on them — a wooden slab with a live edge is basically taking a chunk off of a tree and leaving the natural edge of the tree on it — it's become a hugely popular thing to build bars out of. We remodeled the old Checkers Restaurant in Santa Rosa, and we put in a 30-inch live edge Chocolate Heart Bar in the new Belly Left Coast Kitchen & Taproom that actually travels from inside out to the patio. It has been a huge hit! 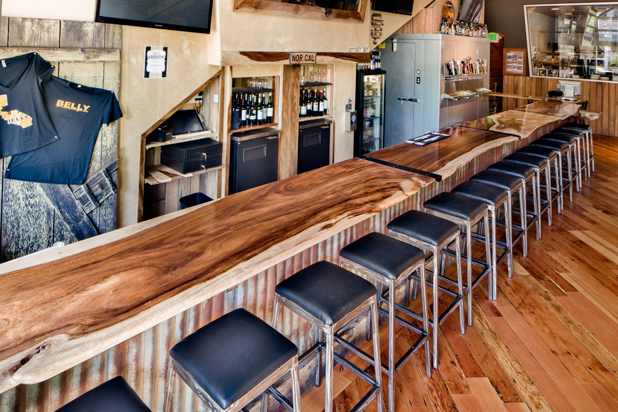 A lot of restaurant owners believe a live edge on a bar seems to make patrons stay for one more drink because the patrons love to put their hands on it.

rdD: What's behind the name Heritage Salvage?
MD: The reason I named my company Heritage Salvage is because I'm very much into salvaging the heritage of the wood. All of our materials come with a story and we love to line up that story with what people are trying to do. For example, we built a Milk Bar at Straus Family Creamery and all of the reclaimed materials were from a diary farm.

We also did Martin's West in Redwood City. Michael Dotson and Moira Beveridge, the owners, came up a couple of Saturdays in a row and we walked around the yard and we built the restaurant from a suite of materials but everything we used had food or the preparation of food in its history. We used water tank wood, wine tank wood, walnut—that was a ton of fun. 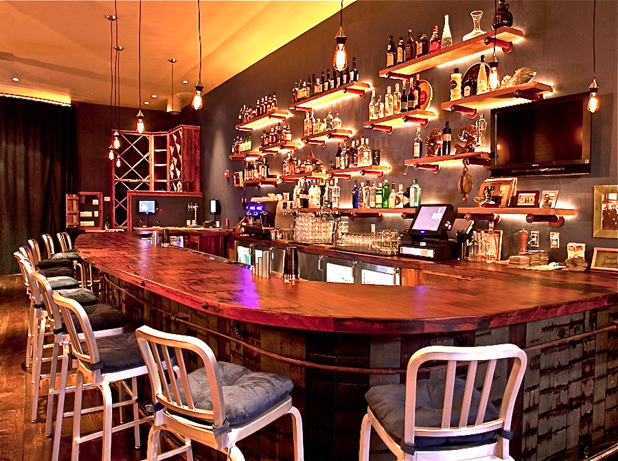 rdD: What are some of the key applications you've seen in the use of reclaimed building materials in retail and restaurants?
MD: I would say that ancient fir beams make for really compelling tabletops because even if it's wood that's been indoors its whole life it has an aged patina to it. We will leave some circle saw marks and the like because what we try to do is to leave part of the story in the patina of the materials when we repurpose them in restaurant.

There is a conception that reclaimed materials are rustic but we've done very high-end, high-class restaurants, and it's not rustic. When you take an old plank and put it through the planer and the sander it comes out pretty sparkling.

rdD: What are some common mistakes you see in material selection or application?
MD: I'd say the most common mistake is asking for or specifying materials that aren't readily available at this point. A lot of times owners sit down and see pictures of a restaurant and say, "This is what I want!" so then the architect ends up specifying a white oak floor — and that's been very popular for a few years and it's hard to find and hard to get. So the architect specifies white oak and then the contractor who is bidding the job calls us up and asks how much we'd charge to do tabletops and floor and I have to say, "Well there just isn't any white oak to be had."

However, more and more, the architects and designers we work with have gotten the message and the first thing they do is come to the yard and see what's available and then they design. It's like when people come in and ask for a Tuscan-style design. I say the reason Tuscany looks as it does is because they built with whatever was available at the time. It created a unique design and style.