How to Maximize your Footprint

Customers seldom rave about good service, but they sure take note when it’s bad. For QSRs and upscale eateries alike, long waits at the counter, drive-thru window or dining table can wreak havoc on business. 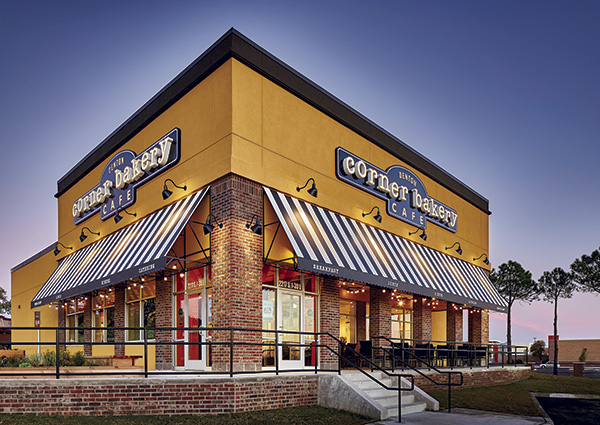 Corner Bakery Cafe studied daily patronage patterns and found it could maintain current unit volumes in a smaller footprint. Photo by Craig D. Blackmon, FAIA“Nobody says, ‘That was a productive burger!’ But if you don’t deliver efficiently, they won’t come back,” observes Juan Martinez, principal and cofounder of Profitality, a consulting firm focused on the restaurant and hospitality industry.

Many factors impact efficient service performance and a restaurant’s ability to squeeze the most revenue out of a particular site, including staff experience and competence, optimal staff scheduling and the number of menu items and options offered. Space design represents another key influencer. Design alterations — some of them minor — can yield significant improvements in service efficiency, profitability and customer experience.

The study of service procedures and how design impacts efficiency in the restaurant industry is a discipline unto itself. Specialists conduct detailed studies and analyses of factors that impact operational performance. Some of those findings make their way into design enhancements that speed service performance and improve the use of space in order to serve more guests in a given footprint. Here we look at several principles that are critical to ensuring the most efficient use of space.

Efficiency consultants and architects typically begin designing a new restaurant, prototype or renovation by analyzing how employees work. “Employees are the sun,” Martinez says. “Everything revolves around them.” 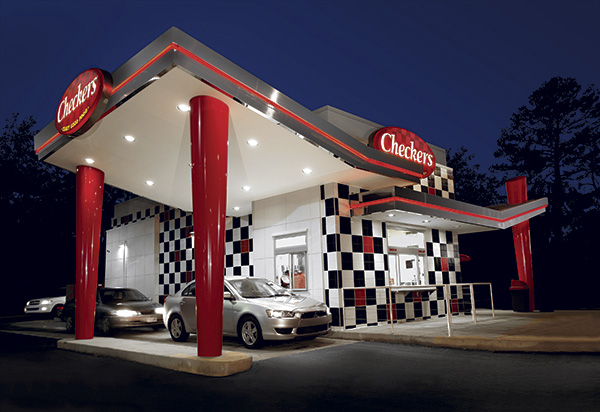 As part of a prototype refresh, Checkers transitioned from the chain’s traditional double drive-thru lines to a more efficient single-line set-up.Specialists observe staff in action, closely monitoring their movements within their workstations, how they interact with other staff and customers, how they obtain supplies, and other activities. “It’s worth it to spend a little up front so that we understand your business,” says David Shove-Brown, partner with Studio 3877, a design firm based in Washington, D.C.

An efficiency analysis can answer a number of questions, including:

“One of the biggest things we look for is how, and how often, employees are crisscrossing,” Shove-Brown says. The more employees need to cross paths with each other and with customers, the greater the chances of service-slowing bottlenecks. Shove-Brown’s firm tracks foot-traffic flow and looks for ways to make it move more efficiently. “We try to eliminate crisscrossing by diagramming new paths,” he says. The improved flow “might be almost like a running track with everybody moving in the same direction.”

Sometimes restaurants can use existing pathways more efficiently simply by changing staff members’ walking patterns, but in many cases physically altering pathways emerges as the best option. The easiest and most inexpensive ways to create new pathways include rearranging tables, moving tableware or glassware storage, and repositioning host stands.

Other options cost more, but do pay off. Relocating a restroom doorway, for example, can reduce instances of customers crossing paths with staff coming out of the kitchen. “Sharing the bathroom corridor with the kitchen corridor is a recipe for disaster,” Shove-Brown says. Moving a door, removing a railing or adding a half wall or screen can redirect traffic flow enough to reduce the risk of guests colliding with a staff member carrying a tray of dishes.

Reducing the number of steps that staff must take to perform their duties is another tried-and-true efficiency booster. Moving waitstaff stations closer to the tables they serve is one common fix that makes sense if the new post doesn’t intrude on guest privacy.

Studio 3877’s client at the Fairfax Marriott, 703 Bar + Kitchen, reduced the space between its front and back bar counters by 3 feet. Previously, bartenders had to take two steps every time they needed to pick up a glass. That might not seem significant, but when you compound those two steps by every customer over the course of a day, and particularly at peak periods, the time savings really add up, Shove-Brown points out.

Consider the Impact of Smaller Footprints

In some cases, a detailed analysis of peak and off-peak space utilization leads to a design with a smaller footprint. Such was the case with Corner Bakery Café, which recently reduced its prototype for new sites to 3,300 square feet, down from a previous range of 3,800 to 4,000 square feet. 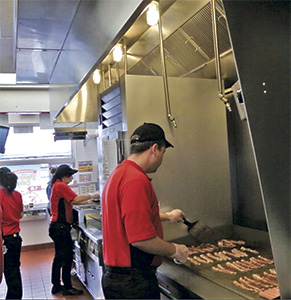 As part of Checkers’ design refresh, the areas between the kitchen, sandwich assembly area and register were shrunk. New equipment has helped to speed up production.Profitality studied daily patronage patterns and found that the business could shrink its footprint and still maintain its capacity. “An important finding was that 78 percent of our parties are parties of two,” says Gary Price, president of Corner Bakery Café. The previous prototype included a number of tables that could seat four, but by replacing those with tables for two, the total number of seats could be reduced from 110 to 90 while still serving 35 parties — the same as in the old model, Price points out.

On the rare occasions when larger parties appear, new, lighter-weight tables combine easily to accommodate them. The new prototype, with fewer empty seats at peak times, preserves each site’s revenue-generating capacity and boosts profitability because using less space means construction, lighting, and heating and cooling costs are all reduced.

Clientele seating preferences also influence layout efficiency. For example, some restaurants have experimented with communal seating in recent years as one way to maximize space utilization. In most cases, however, customers in the U.S. haven’t taken to this format as readily as Europeans have, according to Shove-Brown.

“We seem to be coming to the end of the communal seating trend,” he says. Many restaurants that adopted this concept believed more seats would boost business. Instead, Americans typically don’t want to sit down to a meal with strangers, so seats between parties lie empty. Thus many restaurants have ditched the concept in favor of more traditional seating styles

The back of the house also presents notable opportunities to raise efficiency. Take the cookline in a QSR, for example.

“If you have a 14-foot line in the back, you may analyze how you use the equipment and find that you don’t need a 6-foot rail,” Martinez says. “A 4-foot one will do. And you don’t need eight burners; four will do. So you reduce the line from 14 feet to 10 feet.” That reduces the amount of space that cooks need to traverse to fulfill orders, resulting in improved labor efficiency.

Such nips and tucks also reduce the overall footprint required for back-of-house operations, which can free up more space for revenue-generating front-of-house areas.

Checkers’ recent prototype redesign embodies this strategy. In addition to a design refresh, this 800-plus-unit brand was given an efficiency and space utilization refresh as well. One of the biggest changes was going from the chain’s traditional double drive-thru lines to a single line.

“Historically, we had two assembly lines — one for fulfilling orders on the ‘driver’s side’ and one on the ‘passenger’s side,’” notes Jennifer Durham, vice president of franchise development for Checkers Drive-In Restaurants Inc., which also owns the Rally’s brand. That served the brand well for decades, but the chain’s menu had changed since its original prototype was designed, Durham explains, and newer items such as chicken wings and ice cream had been added without a significant reconception of the production area layout.

“We started over with a clean sheet of paper,” Durham says. The company brought in experts to perform time-and-motion studies on how employees cooked and assembled every product. The findings guided the reconfiguration of the kitchen area and the revamping of order-fulfillment processes. 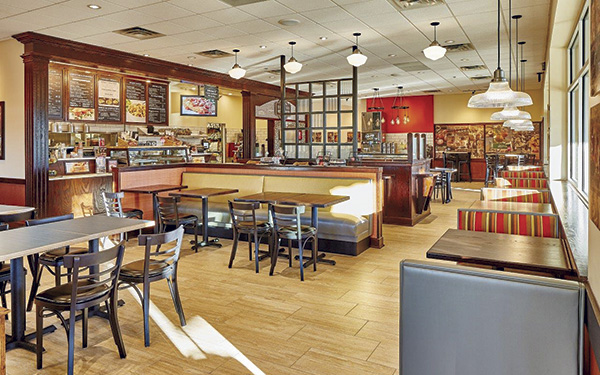 After realizing 78 percent of its patrons were parties of two, Corner Bakery Café replaced its four-top tables with two-tops. In doing so, the chain reduced the total number of people it seats to 90 from 110, but it still serves 35 parties — just as in the old model. Working with Profitality, it was able to reduce the prototype size for new units to 3,300 square feet. Core States Group was architect of record on the project. Photo by Craig D. Blackmon, FAIA Checkers’ new design features just one assembly cookline that performs more efficiently than the old two-line setup. In the new assembly line, the areas between the kitchen, sandwich assembly area and register were shrunk, and new equipment has helped to speed up production. For instance, cooks now have headphones that allow them to start orders from the moment customers speak into the menu board.

Video monitors display orders to cooks so that they can easily confirm order accuracy if they are unable to hear an order or if they forget an item in the heat of battle. “Technology helps us accelerate the orders,” Durham says. “We’ve made one line move faster than two.”

Other changes, including a new fryer model that accommodates more baskets and an upgraded grill that recovers its temperature faster after cooks place refrigerated meat on it, helped to increase cooking capacity. A small refrigerator at the fry station ensures that fry cooks always have product on hand at high-volume times and can replenish products during off-peak periods.

All of Checkers’ efficiency improvements — gaining “a second here, a second there” — make employees more productive, enabling labor cost savings of 25 percent per location, Durham says. Average order-fulfillment time was reduced from 194 seconds in the previous prototype to 180 seconds. In the first year after launching the new prototype, sales were 50 percent better in new and remodeled units than the system average, with a profit almost three times better than company average.

Simplicity is the key to efficiency in the back of the house, Martinez emphasizes. “The more steps there are, the more pieces of the chain that can break,” he says. It comes down to “cognitive ergonomics — how humans process information. If you get up to 15 items or more on a checklist, you get brain overload,” he says. If the cooking process is overly complicated with several points of repeated failure, even an efficiently laid out space won’t yield an efficient kitchen.

For example, a conveyor oven provides consistently high odds of success because it requires little attention to cook food to specifications, Martinez says. A sauté pan that needs human intervention, on the other hand, is a potential point of failure because it requires a cook to remove the food from the pan at exactly the right time. A minute of distraction could lead to overcooked food requiring a time-wasting, profit-killing do-over.

Of course, many dishes, especially in fine restaurants, require chefs to use their skills in more labor-intensive cooking styles. Even in those cases, design attributes such as easy access to cooking equipment, minimum travel distance to obtain ingredients, and work stations positioned to foster efficient assembly line–style production will boost productivity and maximize use of space.

In all design plans, both form and function represent important considerations, but financial success depends heavily on getting function right. While aesthetics including finishes, decor, acoustics and other qualities of a space that impact the guest experience and the look and feel of a restaurant are big considerations, functional considerations should come first.

“The most important variable in design is final unit economics — the capacity to drive sales and reduce costs,” Martinez says. “I suggest that you do functional design first; then do form.” Absent an efficient use of space, even a design that hits all the right aesthetic notes may not result in a successful establishment. Indeed, a well-conceived space utilization plan can have a surprisingly outsized impact on profitability.