George Paxos, founder of multiconcept group Paxos Restaurants, has plenty of experience with selling the sizzle. Each of his first four restaurants in Pennsylvania’s Lehigh Valley — three in Center Valley and one in Bethlehem — is highly regarded for both food and design.

And each concept is distinct, from modern Mexican at Torre to premium steak and seafood at Blue and Top Cut. 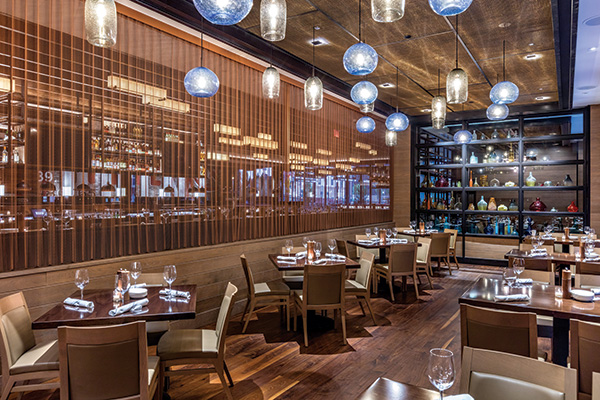 A smaller dining area is separated by a copper mesh curtain that provides a measure of privacy but allows the energy of the restaurant to come through. Images courtesy of Max TouheyPaxos’ newest venture, however, delivers sizzle in its own unique ways. Opened December 2016, Firepoint Grill in Newton Square taps the primal allure and flavor of fire as the foundation for a stylish, modern American restaurant. Named for the temperature point that a flame must reach to maintain combustion, the concept celebrates fire from its featured open kitchen, where wood-fired cooking is the hero, to its design, which incorporates both overt and abstract references to fire throughout.

Built from the ground up in a new, upscale retail village, Firepoint Grill is the fourth Paxos restaurant to be designed by New York-based Jeffrey Beers International (JBI). Paxos’ charge to the team was to create “a very lively, chic, energetic, theatrical atmosphere that I could put an eclectic menu into,” Paxos says. “I wanted open-fire, wood-fueled cooking to be the restaurant’s heartbeat. We serve everything from very high-end, dry-aged prime steaks to gourmet burgers, pizza, wings and creative entree salads. I wanted casual and comfortable but a polished high-design take on casual.”

The JBI team, which handled both the building and interior design, delivered. Beers and lead designer Michael Pandolfi began concept development by channeling Frank Lloyd Wright, who made the fireplace and hearth central features of his residential designs. 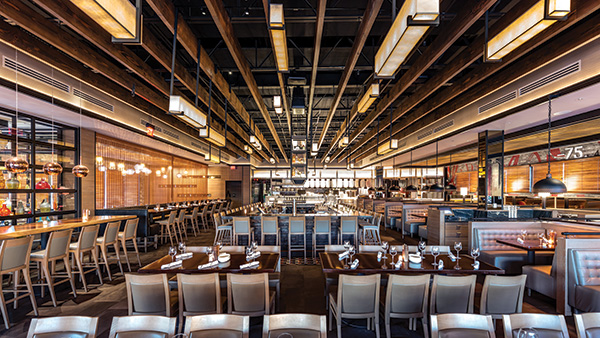 Long wood beams against high exposed ceilings; concrete-look porcelain tile flooring; muted colors and soft lighting combine to create a warm, comfortable, loft-like look and feel.“Wright influences are significant,” Pandolfi says. “We discussed some of his work with George when we were coming up with initial concepts, especially for the building and the exterior. He really liked the modern style with stacked horizontal planes. That’s where we got some of the design inspiration for the exterior.”

Featuring a series of intersecting elements and overlapping flat roof panes at various heights, evocative of some of Wright’s later work, the building’s facade incorporates warm woods, slate and black iron. Full-scale timbers sourced from a group of local Amish barn builders line the entry section. A large, freestanding vertical gray slate wall along another section of the facade is both a dramatic visual element and a defining structure for the 130-seat outdoor patio that sits behind it.

Within that slate wall, a large glass fireplace that can be illuminated in a variety of colors provides ambience for the patio and, as it’s double-sided and visible from the parking lot, acts as a beacon for arriving guests.

Another striking element of the facade, flanking the entry, is a 30-foot-high, illuminated vertical wall section holding stacked firewood. “When you get out of your car, you can smell the wood, see that visual and the burning fireplace, and hear the music from the patio, which has its own very large bar and beautiful wood-beamed ceiling. It’s really inviting and energetic, even before you step inside,” Paxos says. 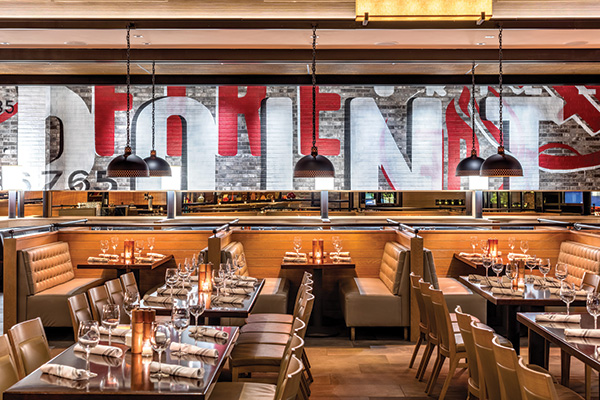 A painted brick feature wall is an abstract representation of the Firepoint Grill logo and includes the restaurant’s latitude and longitude.Inside, the Wright-influenced design ethos of simple lines and natural materials — wood, iron, brick, stone and leather — continues, as do both overt and subtle references to fire.

Upon entering, an immediate focal point is the large, rectangular bar that occupies the center of the main dining room, fronting the kitchen. With seating for up to 30 guests, the bar is the “social epicenter” of the restaurant, according to Pandolfi, and was designed to be completely open. There’s no back bar to block views of other guests or into the 2,500-square-foot open kitchen, which is framed by a long marble-like counter and glazed black tile walls. Its $1 million equipment package includes a large grill; a rotisserie; and a domed, tile-covered pizza oven, all fueled entirely by wood fire and visible to diners and bar guests.

In place of a traditional back bar, liquor bottles and two large TVs are housed on a custom iron shelving fixture suspended from the ceiling. The shelving is made from the same type of iron bars from which linear, fabric-lined box light fixtures hang, casting a warm, amber glow throughout the dining room.

Among Firepoint’s interior design features, Paxos says the bar was a significant investment. It is topped with durable black quartzite stone with gold veining. The bar’s front is lined with reclaimed wood planks that were blackened using the Japanese shou-sugi-ban charring technique, another example of intentional incorporation of the element of fire into the restaurant’s materiality. Adding to its standout design, the entire bar is surrounded by a perimeter of custom-painted floor tiles in a Wright-inspired geometric pattern.

Custom geometric tile flooring surrounds the patio bar as well, and it is also used to line that bar’s front. “Both of the tile patterns are really beautiful,” Paxos says. “They add so much to the overall design of the restaurant and bring in just the right amount of visual energy.”

Forging a Lived-In Look and Feel 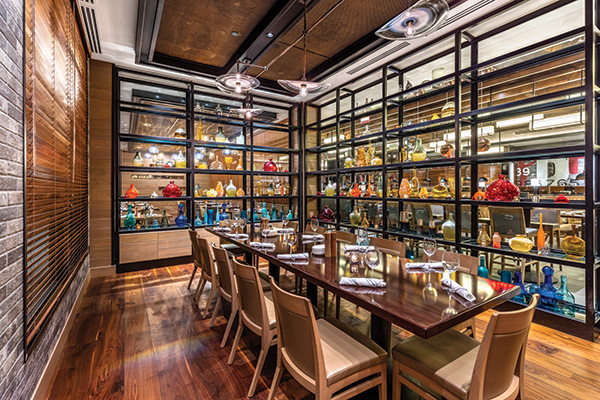 Shelves lining the glass-enclosed private dining room hold colored glass objects arranged as abstract representations of the colors and shape of flames.While a sophisticated concept in a brand-new building, Firepoint was carefully designed to feel warm, comfortable and lived in. To that end, long wood beams run the length of the main dining room against high black-painted ceilings and exposed ductwork. The beams appear to extend all the way from inside to outside, passing through a full-length glass wall that separates the patio from the restaurant’s interior. Concrete-look porcelain tile and warm wood flooring in select areas, along with a painted brick feature wall, help to create a loft-like aesthetic.

“Some of our thinking centered on creating a feeling that maybe this was once a warehouse or loft space, that it has the look of something that we might have uncovered and repurposed during the design process,” Pandolfi says.

The brick wall also serves to add color and graphic interest to the otherwise largely muted interior. “We took the Firepoint logo and abstracted it and gave it a kind of weathered look,” Pandolfi says. “The numbers in the painting are the longitude and latitude of the restaurant’s location. The owner may expand the Firepoint brand in the future, and the idea was that each additional unit would have its local latitude and longitude incorporated in a similar way.”

To maximize comfort, the majority of the restaurant’s seating is soft, leather-lined booths. A row of large, U-shaped booths sits along the painted brick wall and is slightly raised to ensure unobstructed views of the dining room. Moving inward toward the bar is a double row of booths separated by a half wall and a central grouping of freestanding tables. A long, bar-height banquette and communal table help to define the main room on the opposite side of the bar.

Beyond the banquette, separated by a copper mesh curtain, is additional dining space, and beyond the communal table, behind iron-framed glass walls, is a private dining room. “The dropped ceiling in the extra dining area is lined in a beautiful copper mesh, and we also used a copper mesh curtain wall that can be opened or shut to provide a little more privacy in that area,” Paxos says. “We actually now just keep it closed because it works so well to give a bit of separation while still letting the energy of the main part of the restaurant come through.”

The restaurant’s glass-walled private dining room seats up to 14 guests. Abstract interpretations of fire come into play here as well.

“We incorporated shelves into the iron framework of the walls, and they hold different-colored glass objects,” Pandolfi says. “The colors of those objects are colors that you see in flames — blue at the base, then reds and oranges and white on top — and they’re arranged accordingly. It’s pretty abstract, but it was all done around the concept of fire and the shape of a flame.”

Additional glasswork in the restaurant, including the feature chandelier in the private dining room and colored glass pendants in the secondary dining room, subtly evoke the fire element as well. “Jeffrey is a glass blower and works with a group in New York called UrbanGlass. All of the glass fixtures at Firepoint Grill are hand-blown, which is an artistic process that involves fire,” Pandolfi says.

Now open just over a year, the restaurant is all Paxos hoped for and more. “Creating the right atmosphere was so important in order to be able to pull off my vision for Firepoint,” he says. “Getting the right mix of sophistication, high energy, upscale and casual isn’t easy, but I’m really happy with the end result. And business is good. I definitely created this concept with the idea that I would do more, that it would be the kind of comfortable, neighborhood destination that every city needs. It caters to every dining occasion and does so in a beautiful, warm and inviting atmosphere.” +