The Smith Brings its Distinctive Look to DC

The Smith is an upscale casual American concept with four locations in New York City. The chain recently made its first move outside of NYC by opening a restaurant in Washington, D.C. that blends the brand’s signature style with its historic surroundings. 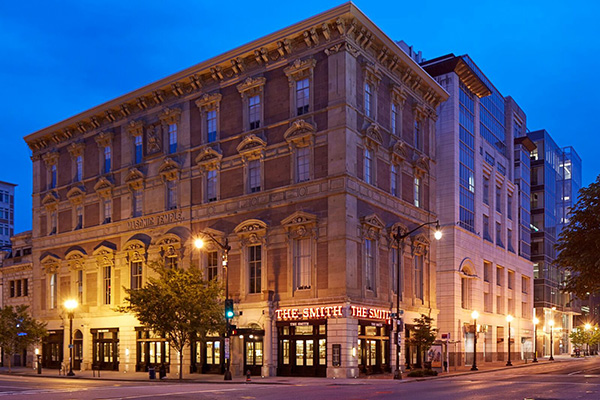 Architecture and interior design work on this restaurant was performed by //3877’s Ryan Petyak in collaboration with the prototype designer Nema Workshop. 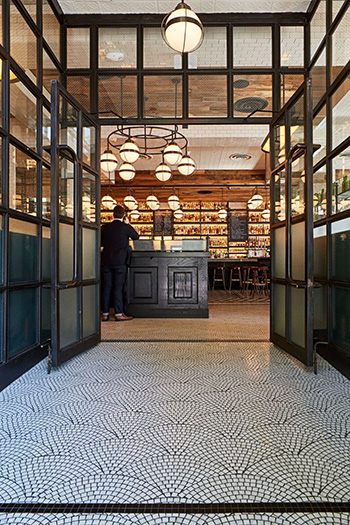 According to Petyak, The Smith has a distinct look that is intentionally monochromatic, hard and cold. Commonly used design elements include marble mosaic flooring, painted steel and subway tile.

The Smith’s New York locations showcase this look from the start with steel and glass storefronts. The restaurant’s D.C. operation, though, is built in a historic building with protected status. This limited any changes to the facade. The designers then, created a painted steel and glass entryway and black-framed windows to communicate The Smith’s design approach as completely as possible from the street.

As soon as guests enter the restaurant, this look becomes even more evident. Along with the steel and glass entry, guests encounter a marble mosaic tile floor in a fan pattern. According to Petyak, mosaic flooring is used in much of the operation. 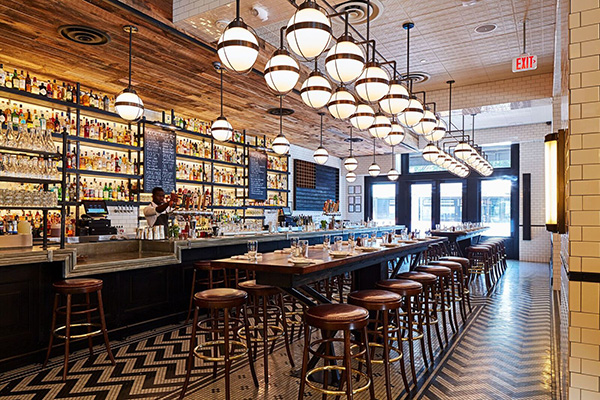 According to Petyak, this marble mosaic is used throughout the dining room, private dining space and bar.

“The bar’s active area has this chevron pattern, but inset with the communal high top table it goes back almost to the pattern you have in the dining room. So we have these visual cues as to what the function of the space is with these tile patterns.”

The restaurant’s distinctive look can be seen in other design elements in the bar. Globe light fixtures catch the eye, as does a ceiling-high display of liquor bottles on the bar back.

Other materials in the area are designed to develop more character with age, including the zinc bar with zinc edging and hardwood furnishings with leather upholstery. 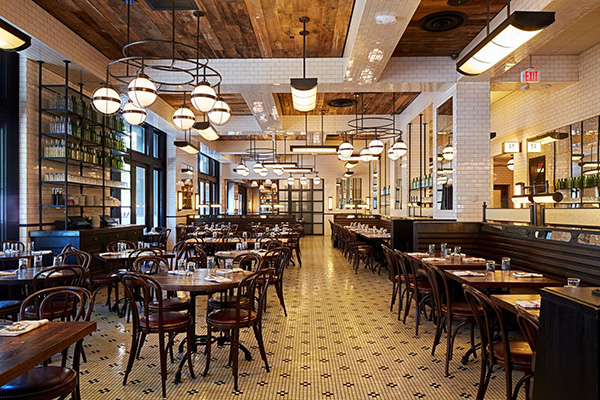 The restaurant’s main dining room features many of the design elements found in the bar, including hardwood furnishings and marble mosaic flooring. Look deeper and you’ll find even more similarities.

The server stations are built with ceiling-high metal shelving much like the bar’s bottle display. The top shelves, in fact are filled with clear decorative bottles, making the stations more than just a collection of silverware and cups. “They don’t want to hide the server stations in the back of the restaurant. Server stations are where all the action is. They’re not disappearing behind a wall,” Petyak says.

Though not well displayed in these pictures, the dining area also features several mirror elements, including mirrors visible by guests seated on chairs that are paired with the banquette seating. According to Petyak, these mirrors aren’t for diners to look at themselves. Instead, they provide guests in those seats with a visible connection to their server and the rest of the dining room.

This soffit/wood combination helps break up the space while giving some visual relief to guests. “There are so many vertical elements in the restaurant. I think the verticality of it gives your eye relief from the busy nature of the restaurant at eye level and gives some warmth and texture that the walls inherently don’t give you,” says Petyak. 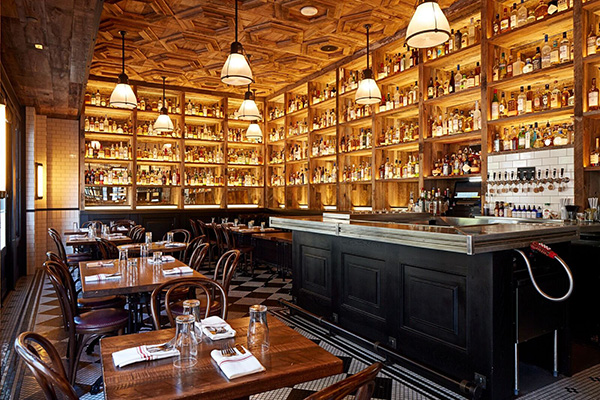 More of these vertical elements can be seen in The Smith’s private dining room, which seats 30 to 40.

Once again, this space features a bottle display, this one running waist-high to the ceiling. (Since these bottles are accessible to customers, they’re filled with dyed vinegar, not alcohol.) The display wraps around two walls, giving it a “library-like feel,” Petyak says.

Indeed, the overall feel of the private dining room is softer and more intimate than the rest of the operation. The eye-catching globe light fixtures of the bar and dining area have been replaced with subtler pendant lights. While there’s still some subway tile and mosaic flooring, the ceiling is wood, while the bar base is a painted black wood, giving the room a warmer feel overall.

The presence of the bar itself, Petyak notes, is one of private dining room’s key features, Its presence simplifies while keeping the louder dining area at bay. “They like the idea that if you have a private party, you don’t have to have servers going in and out to get the drinks. You can get them right at that spot.”