Before and After: Inside Chicago’s Iconic Topolobampo Remodel

Renowned chef Rick Bayless has operated Chicago’s Topolobompo for nearly 30 years. In all that time, it hadn’t undergone a major redesign until this past winter.

The project was spearheaded by Megan Walsh, project designer with the Aria Group.

One of the biggest challenges was the timeframe, says Walsh. Every year, Topolobampo shuts down between New Years Day and the second week of January. Bayless wanted all work performed in that window, giving the design and construction team just nine days to complete the project.

Fortunately, Walsh says, the entire effort was sped up by Bayless’ clear vision.

“He asked us to create a space that was sumptuous, elegant and wondrous, that brings the energy of the kitchen out into the dining room and, even though it’s a very small space, still gives people their own space and a special feeling within that space.” 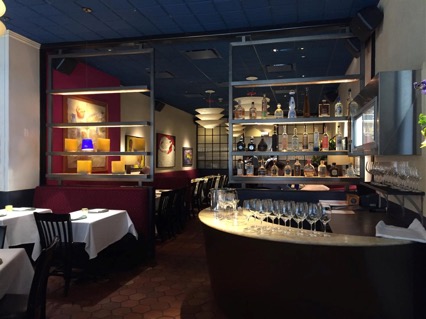 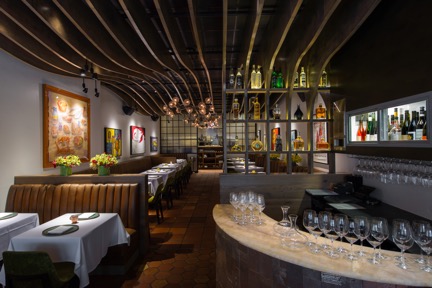 Accomplishing all this is the redesign’s most striking feature: Undulating wood fins that travel from the display kitchen all the way through the front of the house. These fins give the space a dynamic feel and symbolize the energy of the work being performed in the kitchen, Walsh says

Beyond their look and feel, the fins have practical uses. They allowed the designers to hide elements like light fixtures and speakers, and also help make every table more intimate through sound dampening. “It does a really amazing thing for the sound in the space. Any sound from people talking tends to bounce [between the fins]. It allows things to be much quieter while the music still works well within the space,” says Walsh. 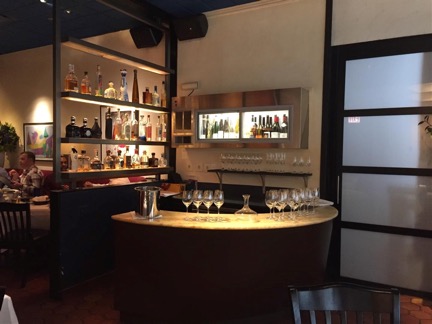 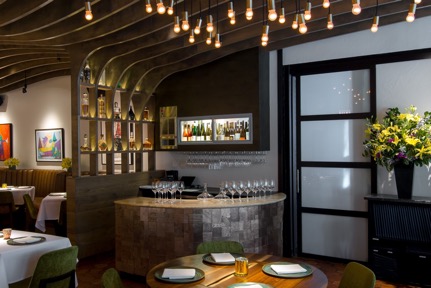 The fins also played a roll in the bar’s makeover. A set extends downward to create an impressive display for mescal and tequila bottles, lit with LEDs. The bar itself has been clad in metallic tile with a pewter finish that “glitters and adds a luxurious effect as you enter the space,” Walsh says. While the wine display on the side was retained from the earlier design, the Aria Group team gave it a bronze cladding to give it a bolder look.

Also noteworthy is the feature table in the foreground. The table itself is full of character, made of a three-inch slab of wood with a live edge down the center. Above is a set of hanging bulbs, creating a starry impression and making this table one of the operation’s most impressive features. 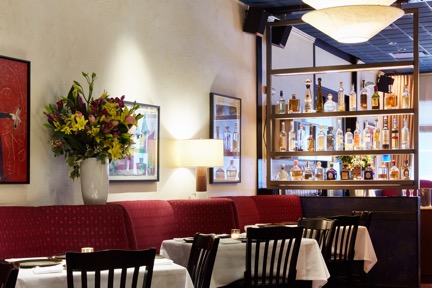 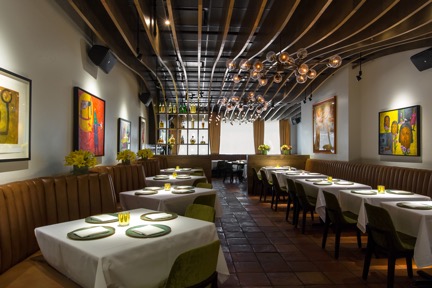 With only a nine-day window for construction, changing Topolobampo’s flooring was never an option. The project team, though, could give the dining hall a completely different look and feel with more cosmetic changes. To start, the walls were painted a pure white, which better allows Bayless’ collection of original art from Mexico to stand out, says Walsh.

While the banquette seating couldn’t be replaced, it could be re-finished. “Previous to this they had vinyl and fabric backs. We switched it out for leather to make it a more luxurious addition to the space and gave it a vertical tuft,” Walsh says

Finally, the lighting was changed. This includes the addition of chandeliers with the same starry night feel of the hanging bulbs. These features are accentuated by a coat of black paint added to the existing ceiling tiles, allowing other design elements to stand out.