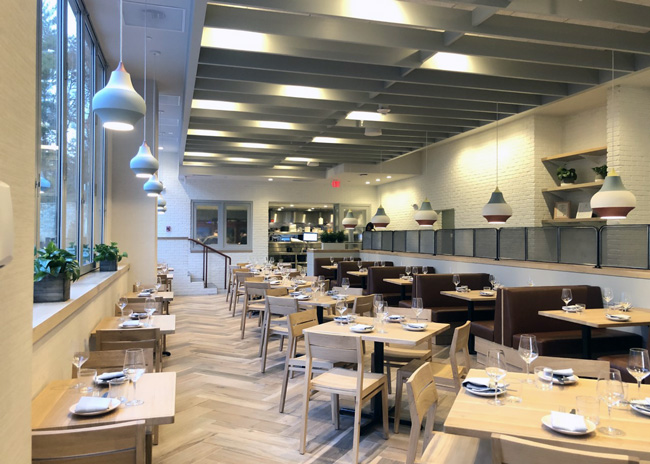 This spring, Little Beet will open its first suburban restaurant, in Westport, Conn. This is a new move for the New York City-based veggie-forward fast-casual concept that has eight locations on the East Coast — but it’s an essential one, says CEO Becky Mulligan.

There are several more suburban Little Beets under construction, including a second in Westport and one in suburban Washington, D.C.

Mulligan opted for suburbia for a number of reasons, the first being that customers were asking for a Little Beet near their homes, since they enjoy it so much when they are in urban locations for work. Also, she says, the pandemic encouraged this move. “We need to have diversity in our portfolio because you can’t always count on the volumes of midtown Manhattan. If there’s another pandemic, I want to have restaurants in communities where people live and work.”

Mulligan is not alone in her assessment. Nearly 12% of rd+d readers surveyed said that suburban locations will drive restaurant development in 2021.

Mulligan carefully chose Westport for her first store because “it’s close enough to where my team is located but far enough away to be a suburb,” she says.

Primarily, she’s looking to place stores in a radius around New York City — in suburban New Jersey, Connecticut and in Westchester county and on Long Island. “It gives us efficiency with our leadership team,” she says. She’s also looking into the Washington, D.C., suburbs because she has teams in place there, and, more recently she’s started exploring Los Angeles since Little Beet’s parent company — name yet to be decided — purchased Le Pain Quotidien, which has a lot of stores there. “The culture of our company is that we’re connected with our teams and our people,” Mulligan says.

Wesport has a full-service sister restaurant, Little Beet Table, about 15 minutes away, in Greenwich, Conn., which is beneficial for teams to collaborate. “We want to show up as a brand and as a team,” Mulligan says. Having a nearby store can also help solidify the branding, she says. A customer might have lunch mid-week at Little Beet, then a dinner date during the weekend at Little Beet Table.

Mulligan doesn’t have any interest in “orphan stores” that are so far away from other restaurants that supply chain issues become a factor.

2. Look for the right landlord.

“I look for a landlord who is passionate about my brand, who wants to support us and in turn we’ll support them. They have to believe in the brand and believe it will add value to their property,” Mulligan says. A red flag she’s learned to heed over the years is landlords with poor communication during the initial process. “I’ve found myself thinking that will change once we get the lease signed, but it doesn’t.”

Analyze the community before you go in, says Mulligan. “Do your homework, know the demographics, traffic counts and which restaurants have been successful in the areas you’re going into. Also look at where your customers are coming from (their place of work) and put your restaurants in the communities where they live.”

And you can’t be the only restaurant in a community because “that’s usually an indication there isn’t business to be had,” she says. “I like having other restaurants around and some competition.” Town centers usually work best. “A suburban concept placed where it’s quiet doesn’t work because there’s not enough foot traffic.”

She also looks closely at trade areas that have other brands her customers are interested in, such as Equinox, Orangetheory, Whole Foods and Trader Joe’s. “My customers are typically in those places frequently in their lives, so that’s where we want to be.”

That said, Mulligan notes that she’s also looking at getting Little Beet “into communities where nobody expects us to be — underserved communities where there’s a real need for healthy food. That would also create jobs and have people rally around us, creating a little bit of a different life for themselves.”

Creating brand awareness in a new community is tricky but essential. “Making sure people know who you are, what you do and why they want to come and see you, is a challenge. And you really get one shot at creating a great first experience,” Mulligan says.

Mulligan uses a variety of social media channels, but she also uses targeted ads to reach people who don’t follow the brand. She likes these to be targeted to people who live a healthy lifestyle but doesn’t exclusively market to that demographic.

Little Beet also uses old school marketing tactics such as A-frame signs on sidewalks or pedestrian areas and sometimes prepares food and catering, which it delivers to local office buildings, schools, or doctors’ offices when a new store opens.

“While the days of street-side sampling are behind us, this is a great way to introduce our food to our neighbors,” Mulligan says.