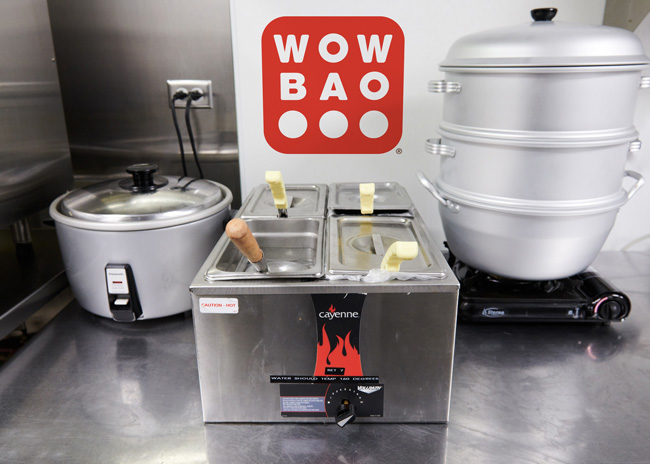 Fast-casual Asian concept Wow Bao, which offers up steaming bao, potstickers and more, has added more than 100 “Dark Kitchen” locations nationwide in just 6 months. The chain developed its Dark Kitchen prior to the pandemic, according to a statement from the company, as a way to assist restaurants and increase increase profits.

“In November 2019, we created a way to help restaurants grow topline sales and bottom-line profits,” says Geoff Alexander, Wow Bao president and CEO. “Although we didn’t envision this initiative as a response to the COVID-19 crisis, we are proud to say our Dark Kitchen platform is assisting operators to help pay rent and employ staff in order to survive this difficult time.”

Unlike traditional ghost kitchens, Wow Bao’s model utilizes existing brick-and-mortar restaurants and provides them with an alternative source of revenue by using their existing kitchen space to prepare Wow Bao’s menu offerings. Items are made and shipped frozen to the participating restaurants, prepared by the restaurant’s kitchen staff and made available to consumers through third-party delivery services.

The goal of Wow Bao’s Dark Kitchen is for operators to achieve a minimum of $2,000 in weekly sales within the first 6 weeks of launch. Multiple operating partners have already surpassed $5,000 in weekly sales, generating an annual run rate of $260,000 with a projected bottom line of more than $100,000, according to a Wow Bao release.

“The Dark Kitchen program has been a seamless integration into our operations,” says Edmund Woo, owner of Saskatoon Lodge in Greenville, S.C. “I have trained existing employees to handle the production at virtually no incremental cost. The ability to not only continue operating during such a vulnerable time, but to help increase margins, is instrumental to help maintain business.”

Seeing the direct and immediate results of the Dark Kitchen program, Wow Bao has invested in making this concept an official arm of its business, appointing Deborah Matelliano as vice president of Dark Kitchen Development. Matelliano spent the previous three years at UberEats, during which time she grew the company’s virtual restaurant account segment across the U.S. and Canada.

As of early October, Wow Bao’s Dark Kitchen program is available in more than 55 cities in 22 states across the country. Wow Bao also noted the company had a pipeline of more than 100 additional locations slated to open by the end of 2020.