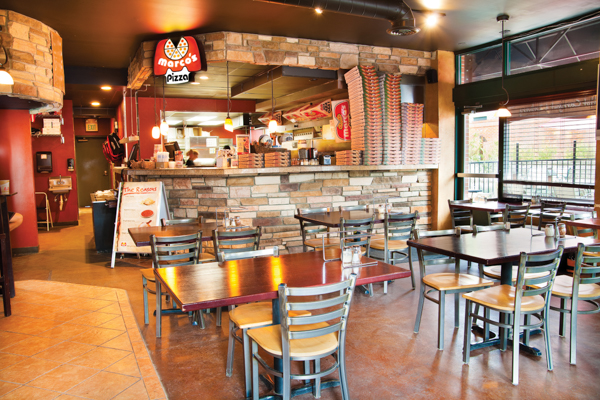 Marco's Pizza opened 109 new locations across the country in 2013 and increased system-wide sales by more than 32 percent, resulting from a growth strategy that focused on implementing best practices and efficient systems and building a positive company culture. Overall, the approach contributed to doubling the company's size in five years.

RDD: How does Marco's differentiate itself in the franchise market, given it's in the competitive pizza segment?

CC: It's the product! As we go through the franchising and development world people ask us what the secret sauce is — no pun intended — and it all comes down to the product. The founder came from Italy and everything he did with his dad and the romance of eating and Italian heritage is distilled into this business. It's a damn good product that's made from scratch.

Right now we have leased or a LOI (letter of intent) for just under 90 projects. Of those projects, 55 percent of our franchisees were customers first.

Everybody has set habits for eating out so getting someone to try our product is the challenge. When they do? They say, "Oh my God, this is really good, it's my new favorite pizza." We did a study when I was a consultant and then we decided we needed a bigger subset of people so we contracted with MRSI, Proctor & Gamble's Test Kitchen. They do studies for restaurants. So we went to them and we asked them to do a brand awareness study and a taste study. They did it and brought us back the results. They told us "We add a question on the backend of our study: What is your intent to repeat purchase this product?" The response said 72 percent would repeat purchase. And then they told us in comparison that the next closest brand they had surveyed was at 38 percent for intent to repeat purchase. The research analyst said that their suggestion would be to give our product away and get people to taste it. People react to the product. So now our grand opening strategy is to give free product to friends and family and do a free slice day to get exposure for the product.

Later, a study revealed our specialty pizzas were a customer draw and in tasting that the intent to repeat purchase was 91 percent. So when we open stores we give away specialty product as well. 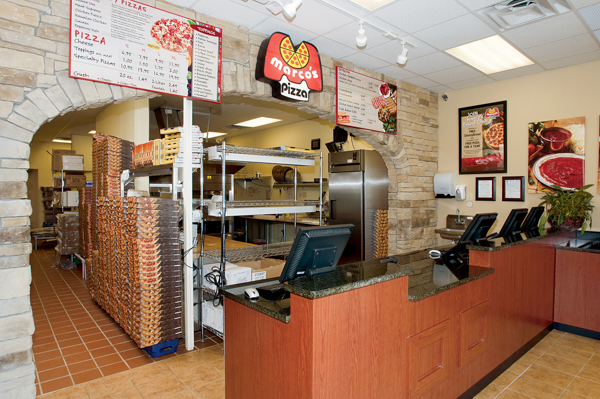 Loveland, Colorado locationRDD: As a company undergoing a massive expansion, how do you manage growth effectively? What are some of your concerns as you balance growth and operational stability?

CC: That is the number one challenge we have right now but I think that will always be our challenge, and we'll continue to work on it every day. We work on growth and having the infrastructure and human capital in place, the people who have the right experience who can take us the next level. We have really embarked on a focus on top grading our organization but we have also worked on infusing a new culture. We tapped into a new culture via "The Oz Principal" which is taken from the Wizard of Oz, meaning Dorothy and the crew had everything they needed inside them.

This principal brought a new culture to our organization and we started that about two and a half years ago and we rolled it out to our area reps, franchisees and right on down to our delivery people. We modeled it after Hormel who did the same thing. They started 11 years ago. It took them 90 years to get to $1 billion in sales and then just 7 years to go to $9 billion in sales. So we took note of that growth and their strategies. So every person in our organization knows the results we are striving to achieve from the top line all the way to the drivers. It's thorough, impressive, fun. It's been a great roll out. It's the glue to keep us on track, in addition to top grading our team.

As fast as we're growing, every day we have to work on it. It's a daily conversation we have in every aspect of every job.

RDD: What do you look for in a target market?

CC: At the store we focus on Soccer Moms. If you can put a store in a community of soccer moms, a tightknit community with great schools and organizations where you can get involved in a community that's ideal. If we have to drop it anywhere we look for strong infrastructure, family-oriented communities, moms with kids, schools, and social networks. We're not putting stores in front of congested areas, like a Target center. We're focused on ease of access for moms with kids. 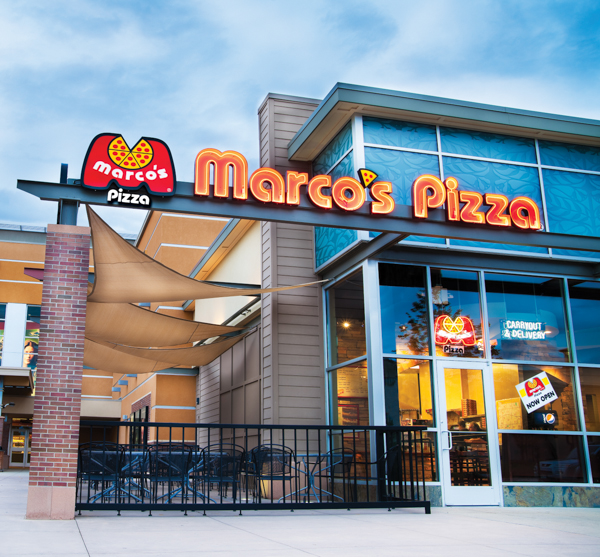 Westminster, Colorado locationRDD: Can you describe your current prototype? And how has your design prototype evolved as the company has grown?
CC: The average is between 1,400 and 1,600 square feet, depending on the real estate strategy and market. For example, we just looked at a site in Tampa that was an old pizzeria. It's about 1,500 square feet, and it's perfect for us. In some ways, the real estate almost selects you. Whatever's available in terms of billboard locations—a corner place with parking that stands out at night and is not hidden by trees or other buildings.

We have carryout units with no seats (that are becoming the minority in our chain). For us, the sweet spot is 1,400 to 1,600 square feet with 18 to 25 seats. Two-thirds of it should be operational and 1/3 is front of the counter.

As for how we're evolving: we're moving away from the carryout units but that was not inititally done on purpose. Early growth for Marco's came from Subway franchisees; the cost to build out is similar with out royalties were more favorable. Our AUV (average unit volume) was higher. It was an easy transition to our business model for those franchisees. They saw a lot of intrinsic value that they could build on with our models, and they wanted seats so we went back to our design and thought about it and we moved from front door to back door. We put in 8 feet of counter space. They suggested we flip our thinking and design the kitchen first—move from back door to front door. We adopted that idea four to five years ago and we put seats in where we could and saw a revenue climb from that.

RDD: What steps has Marco's taken to prepare itself for success internationally? What's one thing you learned you wished you'd known when you entered these new markets?

CC: We have growth in the Caribbean and Bahamas, and we're underway on a larger deal with India and that will be finalized soon. However, we have been focused 100 percent on the U.S. and our domestic growth and the only time we've gone international when we had the right partner and the right opportunity. It boils down to who the partner is. Growth in the U.S. is still our primary focus and it's taken a lot of energy and effort. The only way we are currently moving internationally is if the partner is experienced, has the infrastructure and could do making it happen using their own background and knowledge.

For example the Caribbean company owns 10 Wendy's and they ship in food on container ships. Nine of their ten stores are in the top sales volume in the world for that franchise. They could teach us a thing or two and make the most of the sales topline.

Our India partner has a similar scenario. The key is that we are in a safe pair of hands who understand the market. We teach them Marco's Pizza and they understand the rest.