Jones Beach State Park in Nassau County, N.Y., is one of the many great public spaces created by Robert Moses, a longtime public official in the state and massive figure in the history of urban planning in the United States.

The state has recently been reinvesting in Jones Beach, updating its activities and amenities in order to better serve the public. These investments include the creation of Boardwalk Cafe, designed by Frederick Bland of architectural firm Beyer Blinder Belle. 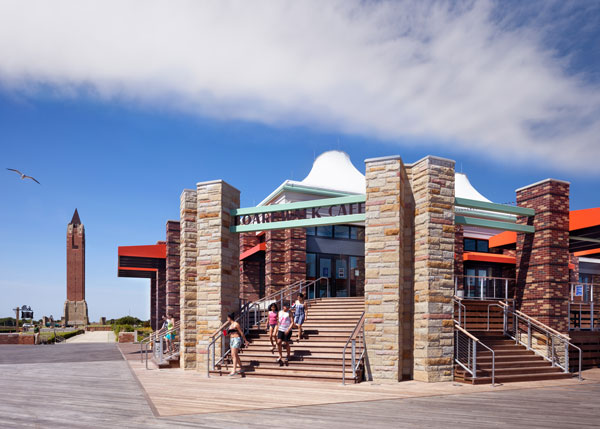 The building’s height serves as one of its defining features. Much of Jones Beach was badly damaged by Hurricane Sandy, Bland notes. In response, the Federal Emergency Management Agency required this new structure be 20 feet above sea level.

“This was an elemental challenge, to try to figure out how to have this building not feel like a building on stilts, but rather still be of the dunes, of the beach,” said Bland. 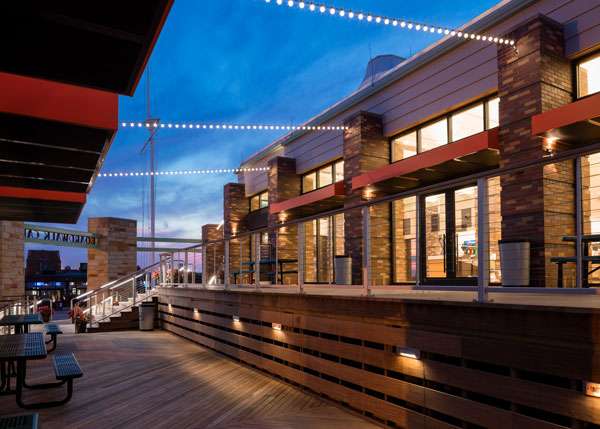 The solution developed by Bland was the creation of different tiers surrounding the building. On these tiers, the designers placed picnic tables, where guests in bathing suits can sit down and enjoy an outdoor meal. 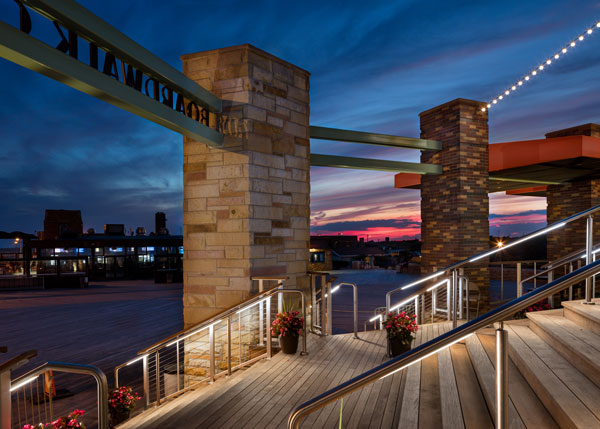 The tiers, and really all the material used for the Boardwalk Cafe, are designed with the area in mind, including other structures originally built under Moses. The stairs, for example are sustainably sourced ipe wood. Not only does it match the appearance of the connected boardwalk, this ultra-durable material should actually outperform the boardwalk over time, Bland says.

Other authentic materials sourced for this project include real brick and real sandstone. 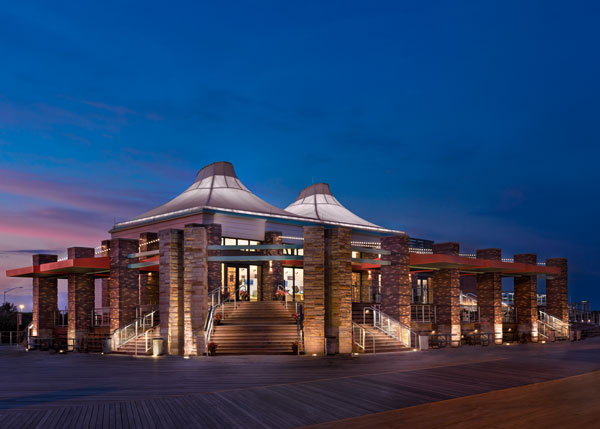 While he wanted the building to fit in with Jones Beach’s original buildings, Bland didn’t want it to be mistaken for one. As a result, one major new element is the pair of tensile roof structures. Made with fabric, these translucent roof structures emit a faint glow from the cafe’s interior lights at night.

With the cafe centrally located on the beach, even in daylight “they can be seen for a mile or so up and down the beach,” Bland says. “The [roof structures] give the Boardwalk Cafe a significant identity that could be commercially useful to the operators.”

In addition to letting light out at night, the tensile roof lets light in during the day. Other design features, such as an oculus at the top of the roof structures and plenty of windows overlooking the beach, provide the space with plenty of natural light.

The interior also features structural brick pillars similar to those used for the tiers, bringing the outside in even more.

Notably, though, there’s very little in the way of furnishings inside the cafe, which focuses on higher-end grab-and-go sandwiches, salads and other items. Since many guests will come in trailing sand and water, customers are encouraged to eat outside. To prevent damage from the elements that do make it inside, the floor is a poured epoxy on slab. 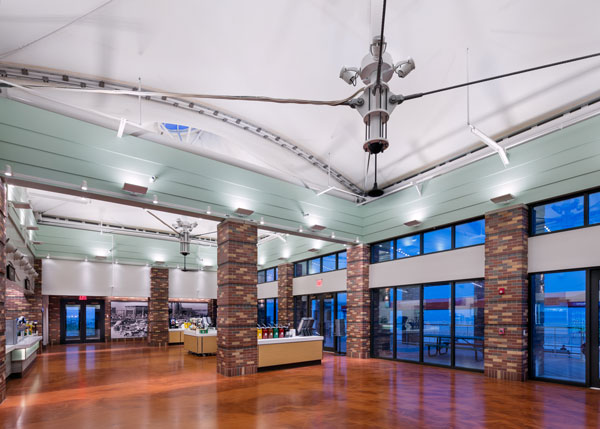 “The floor is where the wear-and-tear is going to occur. We went through a lot of options. Cost is important, but so is long-term wear. In recent times people have become enamored with a raw concrete or tinted concrete floors. We started with that approach and ended up using [an epoxy] material...It's a topping that has a vibrant color mixed into it. We think it will hold up very well and was relatively inexpensive to create,” says Bland.