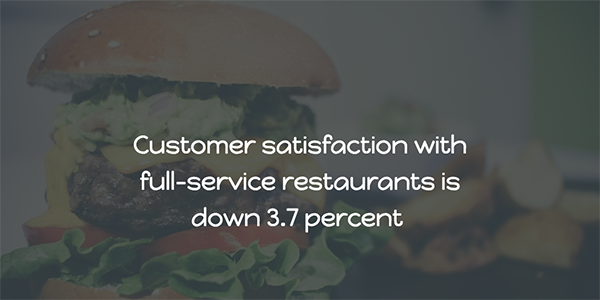 Menu prices continue to rise, but consumers don't think full-service restaurant quality is currently good enough to justify higher prices, according to the ACSI. Same-store restaurant sales are down, and foot traffic is shrinking. Independent restaurants and smaller chains, which make up the majority of the industry, are down 4 percent to an aggregate score of 78. 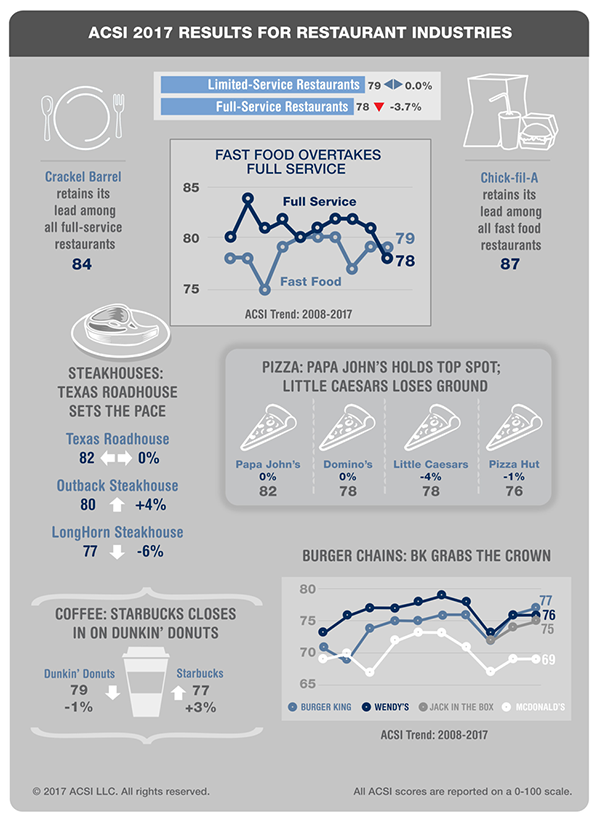 Among the largest chains, restaurant-retail hybrid Cracker Barrel led for the second year in a row (+1 percent for a score of 84). Texas Roadhouse (unchanged at 82) was the top-scoring steakhouse, and its same-store sales outpaced many of its competitors in the first quarter. Outback Steakhouse came in at 80 (+4 percent) and LongHorn Steakhouse at 77 (-6 percent).

In third place, Olive Garden was steady at 81 and tied with Red Lobster, which gained 3 percent in a second straight year of improvement. This year marks a four-year high for Red Lobster, which has invested in menu upgrades and higher-quality ingredients. Olive Garden continued to generate sales, benefiting from increases in its to-go business.

Applebee's (79) and Ruby Tuesday (78) are unmoved, while Chili's (+3 percent to 77) overtook TGI Fridays (-3 percent to 76). As sales slump, some chains are looking to redefine themselves, including rethinking locations and off-premise initiatives, according to ACSI. For example, Applebee's introduced wood-fired grills, but this has not yet translated to higher satisfaction or sales. Ruby Tuesday also stalled for ACSI amid store closings, and the company put itself up for sale in March.

Denny's improved (+3 percent to 76), but Red Robin sank to the bottom of the category (-9 percent to 73) as first quarter same-store sales dropped 1.2 percent. Like major brick-and-mortar retailers, casual-dining chains like Red Robin have not been immune to an overall trend of declining foot traffic as consumers stay away from malls in greater numbers.

Customer satisfaction with fast food restaurants is stable with an ACSI score of 79. Better quality ingredients, speedy service and low prices are keeping customer satisfaction high, according to ACSI. Chick-fil-A remains the leader (87), far ahead of KFC (78). In second place, Panera Bread was up 1 percent, tied with Papa John's at 82 (unchanged).

Chipotle Mexican Grill stabilized (+1 percent to 79) from a sharp drop a year ago, suggesting that the company is recovering from its 2015 food safety crisis. Same-store sales for Chipotle also rose in the first quarter. Taco Bell (+1 percent) scored 76, and Dunkin' Donuts (-1 percent to 79) remained ahead of coffee rival Starbucks (+3 percent to 77).

Hamburger chains all fall below the industry average. After lagging Wendy's for more than two decades, Burger King grabbed the crown among burger chains with a 1 percent uptick to 77. Wendy's (unchanged at 76) and Jack in the Box (+1 percent to 75) follow closely behind. Much lower, McDonald's continues to occupy last place – flat at an ACSI score of 69.