Roti Focuses on the Casual in Fast-Casual 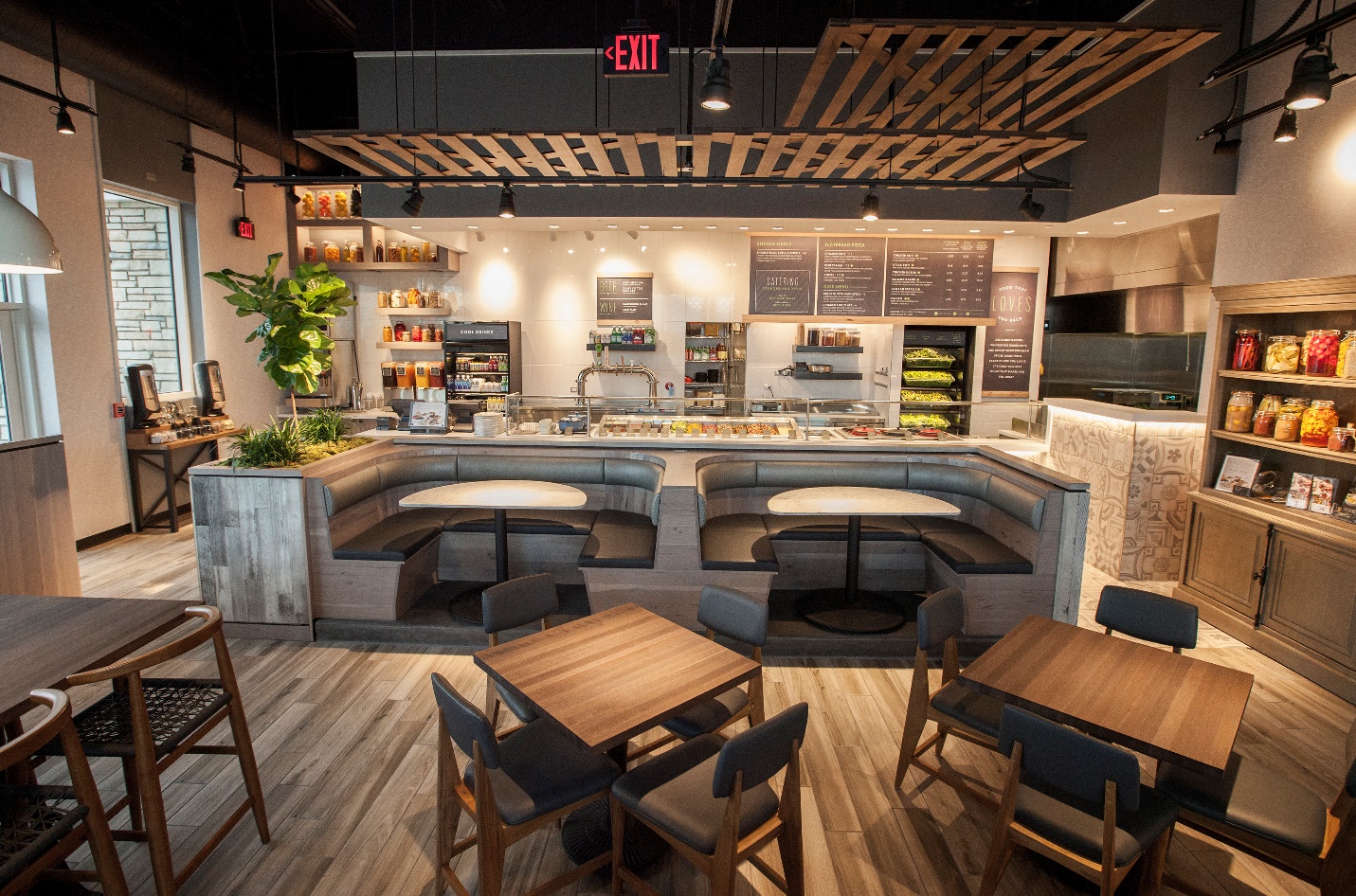 The fast-casual segment has thrived in recent years by offering food that rivals sit-down establishments in combination with the speed and convenience of a quick-serve restaurant. That's a powerful value proposition.

But to the leadership of the newly named Roti Modern Mediterranean, formerly Roti Mediterranean Grill, the balance of these two attributes in the marketplace has tipped too far in one direction. While the food is still good, many fast-casual restaurants have been designed for customers to come in, eat their food, and get out. One. Two. Three.

In contrast, Roti's prototype tries to remake how customers think about and act in a fast-casual establishment. The food, including several new menu items, is still high quality and served quickly, but the space encourages diners to take their time. "That's part of the modern lifestyle," said Peter Nolan, Roti's chief brand officer. "You want it quick, you want it affordable, you want it fresh, but you also want a place where you can hang out."

The first of these restaurants opened last November in a 2,500-square-foot space in Northbrook, Ill., north of Chicago.

A quick glance at this restaurant gives an idea of what Roti strives to achieve. While many fast-casual concepts feature bold colors or an industrial chic look showcasing black and metallic surfaces, Roti's gone with a much more neutral color palette that uses more grays and browns. These colors, said Nolan, create a more relaxed atmosphere where diners feel that it's okay to take their time to enjoy their food.

Several other design choices reinforce that sense. Much of this new prototype is built around a handful of booths that are surrounded by walls on three sides. These walls create an intimate space where families or couples on a date can enjoy their food in a cozy setting. Roti gives other dining spaces a more intimate feel by hanging large wooden, ladder-like design elements from the ceiling. These pieces help close-in the spaces, making them feel more private.

High-quality furnishings also encourage lingering. While many tables are hardwood, others have marble tops. Instead of hardwood, seats and booths feature gray upholstery, making them more comfortable.

Not everything is gray or brown, of course. While the new color palette creates a more relaxed experience, it also lets the bright colors of Roti's food stand out. Like many fast-casual restaurant chains, Roti utilizes a counter-style approach where customers walk down a serving line to look at their choices and place their order. The new prototype features an updated serving area that showcases the finished product. 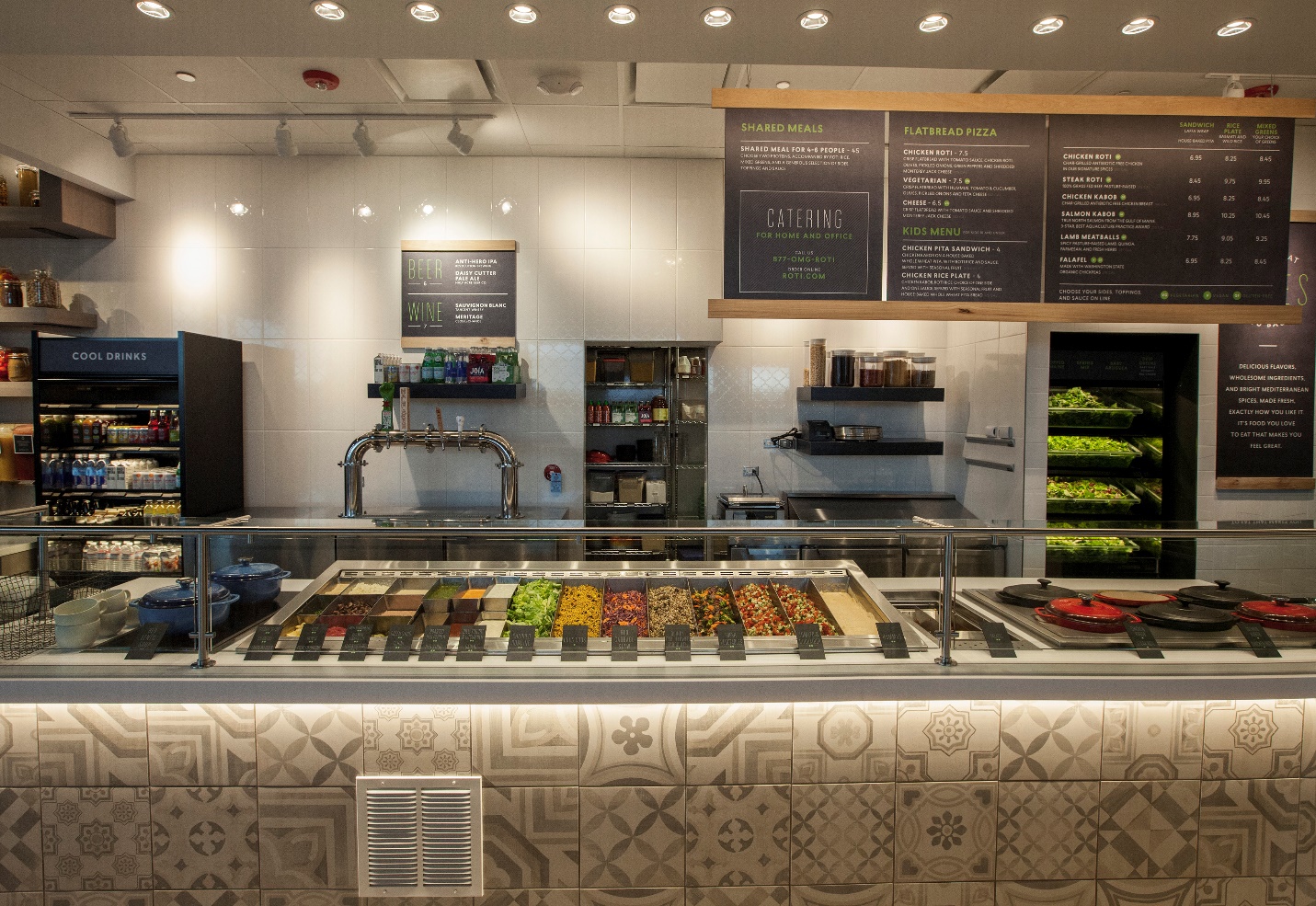 Roti's updated serving area showcases the ingredients more than before.

By using this cookware instead of stainless steel drop-ins, the chain reinforces the quality of its food and elevates the overall experience, Nolan said. "We felt this was a way of displaying food that was reflective of the quality of food that we're serving."

The area behind the serving line has been reworked as well. Shelving units display different types of lettuce, as well as brightly colored pickled vegetables. Also behind the line are beer taps — a new offering for Roti. The chain's new beer and wine program will naturally encourage customers to take their time, while (ideally) more than making up for any slowdown in table turns.

As far as individual customers go, however, slowing down is just fine in the eyes of Roti.