Game On: Eatertainment is Back at Flight Club

Consumers have become bored at the sight of their own living rooms during the past couple of years as their entertainment, lifestyle and dining has been limited by COVID-19 concerns and restrictions.

But a trend that was nascent before the arrival of the pandemic is warming up again. Eatertainment concepts, which offer dining, drinking and games, were trending before the pandemic and their coming back with a vengeance after being hit hard. According to Chicago-based market research firm Datassential, 82% of Americans have been to at least one type of eatertainment venue, with Millennials the demographic most likely to frequent them.

While concepts like Chuck E. Cheese and Dave and Buster’s were pioneers, trending venues offer everything from old-school games like bowling, shuffleboard and golf to high-tech competitive gaming. According to Datassential, 50% of consumers believe these venues provide value since they double as a place where they can eat and enjoy a fun activity.

After launching in London in 2015, Flight Club opened its first U.S. location in Chicago. The chain has plans to expand to Boston and Houston as well. Four new locations are slated to open in 2022 alone. Going forward, Flight Club expects to open three to five locations a year.

“Our goal is to set up flagships in different parts of the U.S.,” explains Alan Cichon, president, North America, State of Play Hospitality, which owns Flight Club and its sister concept, Ace Bounce. “The idea then is to find secondary locations in those markets and grow regionally.” The venues are all corporate-owned, though the company will consider licensed operating partners in some markets.

“We’re really optimistic about the future,” says Cichon, “and I’m cautiously optimistic that we’ll get there relatively quickly.”

Flight Club is a darts and dining concept. It was more negatively impacted by COVID-19 than traditional restaurants, says Cichon, because there were more restrictions in such places given the volumes they usually draw; the business is based on groups, which had to be limited; and the brand wasn’t set up for takeout.

But now, Cichon says, “there’s an unbelievable amount of pent-up demand to have genuine human contact again.” Plus, he believes this holiday season will be good to Flight Club, though it’ll be different. Instead of large corporate events for 150 to 200 people, he expects to see more departmental parties for 30 to 40 people.

Because of this, the brand offers a premium food and beverage experience. “It’s been put together in a way that works for an activity — not so much fork and knife items,” he says, though there is the option to sit at a table and eat separately to playing.

The average guest visit lasts an hour and 45 minutes, he says. The playing spaces are separated with banquettes, but these can be pushed aside to join several areas for larger groups. There are no walls around the spaces “so the energy becomes contagious,” Cichon says.

And the real beauty of Flight Club? “No one is on their phone, but people are really interacting with each other in a way not many people do anymore.” 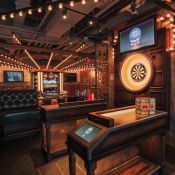 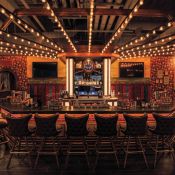 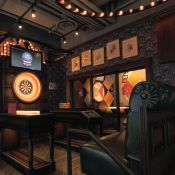 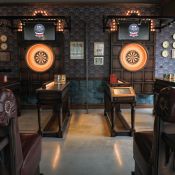 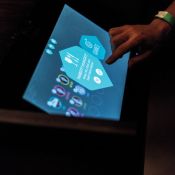 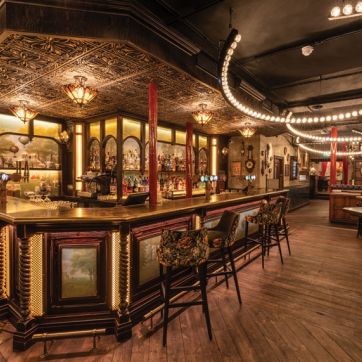 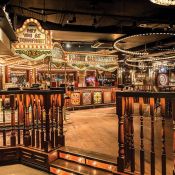 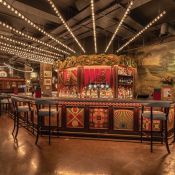 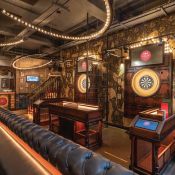 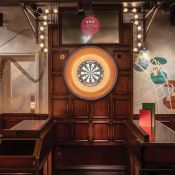