Astro Lab Offers A Microbrew Experience in a Shotgun Space

Located in downtown Silver Spring, Maryland, Astro Lab Brewing operates a brewery and taproom out of a building that dates to the mid-20th century. The operation was designed by a team at GTM Architects led by Jeff Whitman, a principal with the firm.

Many of the challenges of this project were centered on the building’s shape. According to Whitman, the shotgun space measures about 30 feet long and 250 feet wide. 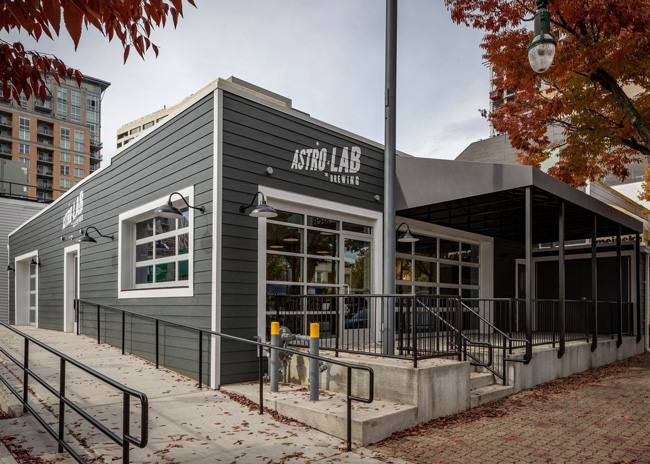 A significant amount of work went into Astro Lab’s exterior. The owners originally wanted a rooftop biergarten but with access point challenges and a wooden roof, it was too expensive to pull off. Instead, the team at GTM designed a smaller outdoor space on the front of the building.

A dutch door on the far end of the patio space provides guests with a direct connection to staffers tending the bar without having to enter the building. This has proved useful during the pandemic, Whitman notes.

The ramp on the side, meanwhile, does double duty. Not only does it provide access in accordance with ADA guidelines, it’s also used to take deliveries for the brewing operation, located in the back of the building.

“They'll have these huge pallets of grains and whatever else for that brewery. That's why that ramp is pretty wide, so they can get a pallet up in there,” Whitman says. 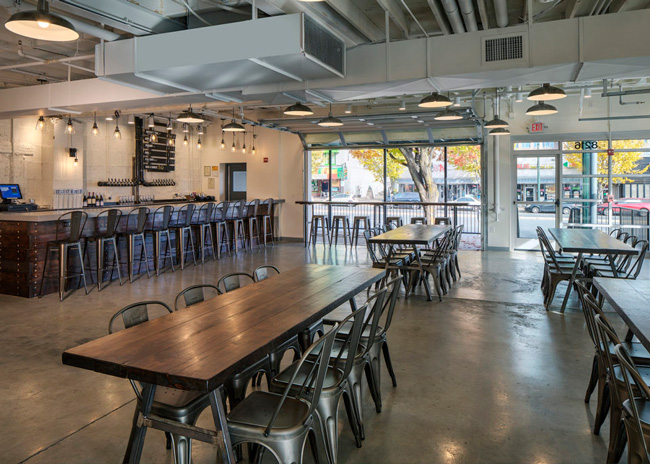 Inside the tap room, the design creates a bright, welcoming space, where people can enjoy a drink, a small bite to eat and maybe a board game (provided by the house).

To create such an environment, the designers allowed for as much natural light as possible through the use of windows, garage-style doors and even skylights.

Other design elements are clean and mostly industrial. These include an open ceiling and exposed duct work, polished concrete floors and a concrete bar top.

Another industrial touch is the tap tower’s black piping against a white brick wall. This contrast draws the eyes of guests and helps showcase the connection to the brewing operation in the back of the building.

“They were looking to highlight that all the way to the back to showcase even the tanks. Budget constraints didn't allow it, but I think they did a pretty good job of highlighting as much as possible that connection to the back,” says Whitman. 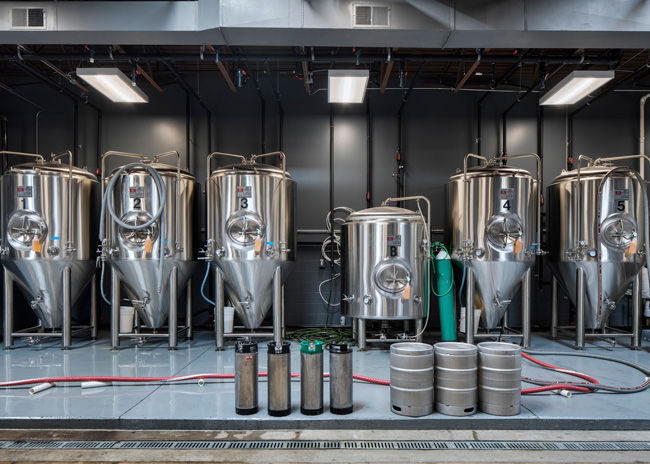 This connection to the brewing operation and the taproom is an important part of Astro Lab’s identity.

To support this link, the GTM team made sure there was a clear sightline between the two spaces. While this was difficult because of the building’s shape, placing the bathrooms as well as the kitchen (located behind the wall with the vinyl wall covering) to the side of the space was key.

“We wanted to maintain a wide enough opening to provide a visual between both sides,” says Whitman. The idea was to keep it open as much as possible…They wanted to keep the kitchen as small as possible to focus on the brewery. That gave us the capacity to maneuver the size and shape of that kitchen to push it off to the side and allow for that visual opening between the two.” 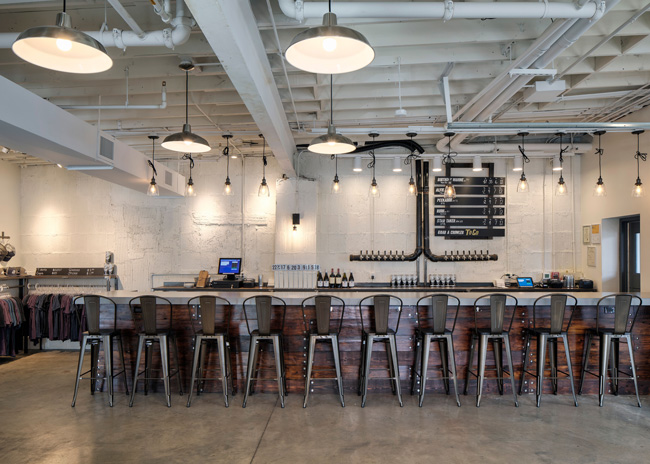 Similar to the location of the kitchen is the brewery’s retail space, where guests can get Astro Lab t-shirts, hats and other items. While this space may seem tucked in a corner, its placement was intentional, says Whitman. Having the taps, merchandise and kitchen all in a line makes them easily accessible to staff.

“Someone can just pop over [to the merchandise] and help a customer if they need to. It keeps the staff down to a minimum. Folks will order some food, and staff can pop it in a [fast-cooking oven], serve a beer, pop back to the kitchen and bring the food out to the folks at their tables.”