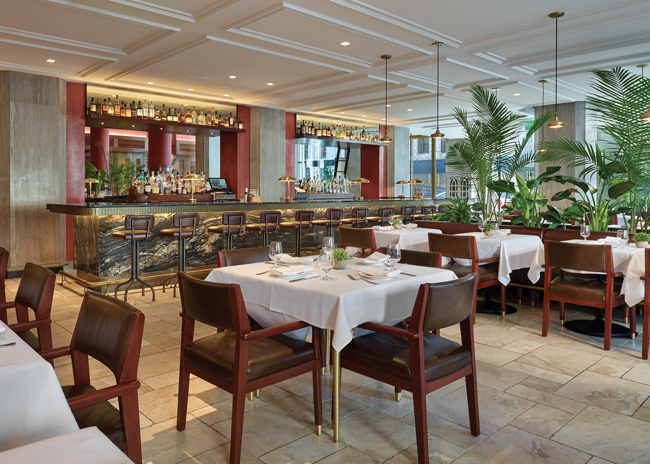 Offering a Nikkei (Japanese-Peruvian) menu with a bit of a Turkish twist, Nahita is the latest venture to hit the thriving restaurant scene in Boston’s trendy Back Bay neighborhood. Nahita’s upscale design with a tropical vibe was the creative vision of Turkish designer Zeynep Fadıllıoğlu, owner of Zeynep Fadıllıoğlu Design Company, and executed by Dyer Brown Architects, a Boston firm with extensive experience in restaurant and hospitality design.

Owned by Istanbul-based Doğuş Restaurant Entertainment and Management (d.ream), Nahita is based on the group’s Fenix restaurant brand. While d.ream operates restaurants globally, Nahita introduces the Turkish brand to the American market.

The building, built in the 1920s at 100 Arlington Street, was once was the corporate headquarters of the Boston Consolidated Gas Company. The property, known as The Arlington, was repositioned in 2014 to house luxury apartments, while the ground floor was previously inhabited by the former Liquid Art House, an art gallery/restaurant that closed in 2017. (Liquid Art House owner Ruta Laukein remains a partner with d.ream on the Nahita concept.) 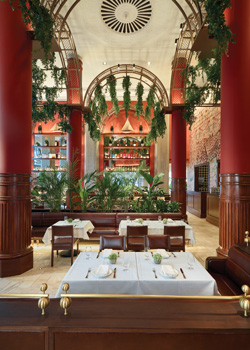 Opened in September 2018, Nahita takes advantage of the historical space with a bar and central lounge that has a vaulted ceiling. From the street, onlookers see the historical building’s two-story arched windows; inside, guests are immersed in an exotic atmosphere featuring a wild animal print wall treatment, rich brown leather, marble-wrapped bars and lush tropical plants.

As guests first enter Nahita, they immediately step in to its open, two-story space, where there is a host stand and lounge area with banquette seating wrapped around the entire entryway. Then, it drops down to a one-story space as you move into the other two-thirds of the restaurant: The speakeasy bar, private dining areas and kitchen are off to the right side, and the main dining room is to the left. The main bar straddles the main dining room and two-story space.

Since the building is on the National Register of Historic Places and received tax credits for its previous remodel, the team had to maintain the original plaster ceiling and stone columns in the lounge, which called for some creative work-arounds to installing any new architectural elements. Decorative metal arches connect the columns for dramatic effect.

“This was a pretty substantial redesign,” says Deniz Ferendeci, director of asset design and support at Dyer Brown. “Originally, the designers wanted the decorative arches to span from column to column. Instead, new round columns were fabricated that are independent of the original structure because they couldn’t drill into or secure anything to the original columns or ceiling. Things may appear to be touching or close, but behind the scenes, there are no screws that drill into the existing stone. The metal archway that accentuates the height of the space is independent.” 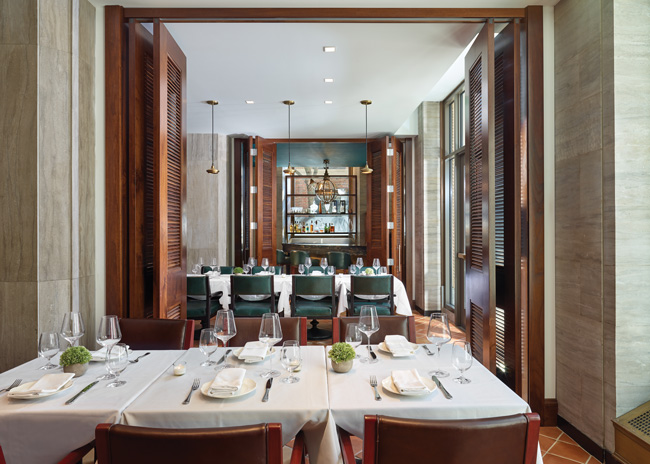 Walnut folding doors separate each private dining room while also allowing them to be opened up to create a larger space for private events.

Although the historical building boasted many beautiful architectural features, one critical design objective was to create a sense of intimacy in the vast, two-story space. “Sometimes you want these bold, vibrant spaces, but the reality is sometimes these spaces become too big. I think that was one of the challenges of the former Liquid Art House: That two-story space didn’t feel intimate for a restaurant setting,” says Ferendeci. “The arches, the steel structure and the plantings not only add visual interest, but they also bring the scale of the space down and make it more intimate.”

These newly incorporated architectural details, from brick-red columns to the metal arches, which were based on the design of Fenix Istanbul, transform the space into a whimsical scene. “Steel red columns and vaults, which [created] a cozy and attractive atmosphere, were designed in harmony with the urban jungle idea,” says Fadıllıoğlu. “It’s a palace; it’s a jungle.” 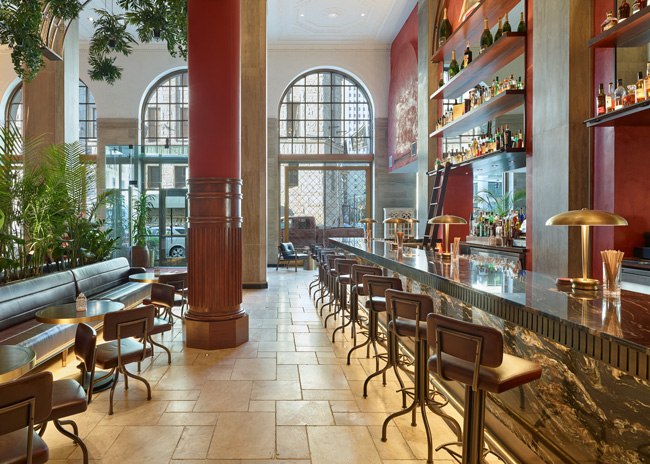 The speakeasy bar functions as a unique space on its own and also as an overflow bar for the private dining area.

Inheriting a space with a central two-story volume and original structural columns made it an easy task for the design team to delineate the key dining areas of the restaurant and turn it into a dynamic venue.

“The diverse interior characteristics with its multileveled ceiling structure and well-conserved marble columns and ceiling moldings influenced us on the new design elements,” says Fadıllıoğlu. “Multileveled ceilings led us to generate the layout for different functions perfectly.”

Designed with flexibility in mind, Nahita has diverse dining areas to accommodate guests who want to have a formal dining experience, to grab a quick drink and appetizer or to host a private event.

To create a more intimate dining experience, the private dining section is completely sectioned off on the right side of the restaurant. Both private dining rooms, where guests can meet with family and friends for an intimate gathering, are outfitted with dark walnut wood panels. Each can seat up to 35 for a sit-down dinner or host parties for up to 70 combined.

The speakeasy is a smaller bar area that has its own menu of cocktails and shareable bites. For guests holding a special event in the private dining area, however, the speakeasy bar also allows for the option to serve as an overflow bar, so they can also have full bar service in a more intimate setting. 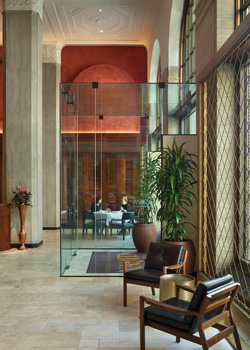 Original columns retained in the space accentuate its height, while reddish walls with an applied plaster finish add warmth and make the space more intimate.Color is used to make the two-story dining area as well as the private dining areas feel inviting and not intimidating in scale. Rich colors and finishes such as walnut wood textures, terracotta tile and marble-accented bars lend warmth to the space.

Antiqued brass was used on small details to bring out the warm tones of the walnut throughout the space, from door hardware to the custom footrests on both the main bar and speakeasy bar to accents on dining tables and chairs. The brass also adds a slight industrial feel and recalls the venue’s past life as the Boston Consolidated Gas Co. headquarters.

Marble wrapped around both bars adds an element of natural beauty.

The original plan was to install an earthy terracotta tile in the private dining room and speakeasy, but then, Humphries notes, “[Fadıllıoğlu’s design team] found a tile made in New Mexico that’s left outside to dry so wild animals leave tracks on it. If you go in the private dining area, you can find two of them. That was something unique that ties in with the custom wall covering on the main wall in the two-story space.”

The custom, large-format cheetah print wall covering was exclusively made for Nahita. Its organic design was inspired by “Zara’s Tales,” a Peter Beard storybook based on his Kenya journals, and sets the restaurant’s jungle theme in motion.

There are pros (plenty of foot traffic) and cons (neighbors are always home) to being situated on the ground floor of a fully occupied residential building, and it also added another layer of complexity to the restaurant redesign. Noise spilling over into the apartment building was an important consideration, so being a good neighbor was factored into the design.

To prevent the sound system — which mostly pumps house music during business hours — from impacting the residential units directly above, the project team tapped the expertise of Acentech acoustic consultants to help with sound isolation.

During the design process, the acoustic consultants visited the site to set up the restaurant’s sound system and measure the sound isolation between the restaurant and the apartments. A sound limiter was installed to calibrate the noise levels inside the restaurant so employees can easily adjust the music volume without disturbing the other tenants.

“Whenever you have a restaurant next to residences, those are always some of the toughest things to make work so everyone’s happy,” says Bob Connick, senior consultant at Acentech. “We were able to set a goal for the background noise level in the apartments to something that we all as a team [including the building’s owner] agreed would be an acceptable transmission level within the residence.”

In the Heart of the Hub 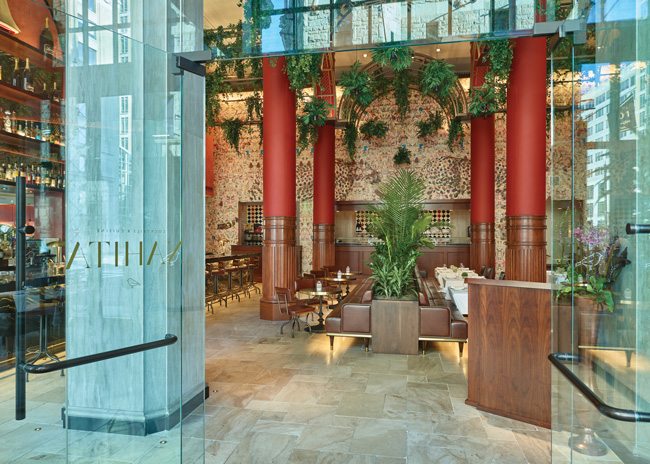 A central design feature of the restaurant’s jungle theme, the custom wall treatment was inspired by “Zara’s Tales,” a storybook by Peter Beard.Being centrally located just a couple blocks from the Boston Public Gardens and a walkable distance from the theater district strategically places Nahita right in the heart of the city’s nightlife — and it was designed with all of the possible dining, entertaining and private event options built in to support whatever local patrons might be craving.

“It’s vibrant and happening from the time they open to the time they close,” says Ferendeci. “If you’re going to a theater show, then you don’t have to sit there for an hour and a half for a full meal by having that lounge. You can cater to some people who want to get in and out rather quickly.”

With a unique customer experience and multiple dining opportunities in one space, Nahita is set to make a splash in Boston’s dining culture. d.ream plans to potentially expand the concept to other hot markets in the future, with an eye on opening Nahita in another happening city such as Miami. For now, Boston is the ideal location to anchor the brand.

“Every time I travel around the country, I remember how fortunate we are to have this amazing restaurant scene, and I think this project complements that. This is a sophisticated owner, and they know what they’re doing,” says Ferendeci. “As Boston is evolving into more of an international city, it speaks to our city’s moment in time.” 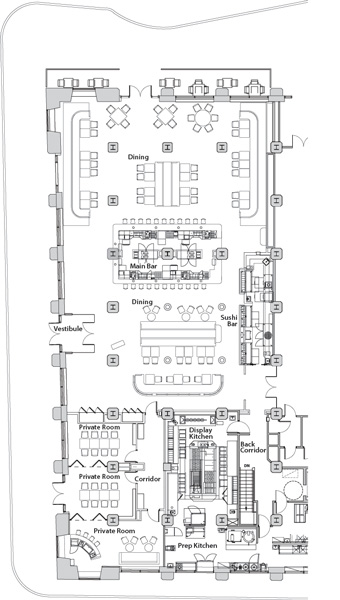 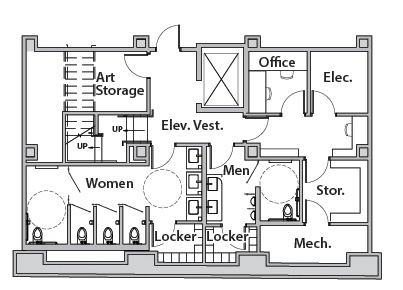