Form and function are intertwined within a bar; one cannot exist without the other, but they can often be at odds,” says Alex Day, co-owner of Death & Co.

Day and his partners pioneered a new era of cocktail culture when they opened the iconic cocktail lounge in 2006 in New York City’s East Village. Now the partners have launched the first expansion of the brand at the Ramble Hotel in Denver.

“From a business efficiency perspective, the function of the space must take high priority, but there are very few hard and fast rules in bar design. Luckily, efficiencies can be found to mold function to form’s beauty,” says Day, “a process we find deeply creative and a necessary give-and-take of the process.”

The edict that form follows function is perhaps truer in bars than any other area of hospitality design — because function equals cash for operators.

“Form and function go hand in hand, literally. Poorly designed bars, no matter how beautifully intended, often wind up ugly as they get cluttered with all the stuff a bartender needs that wasn’t considered in the bar design. After the functionality needs get baked into the plans, that’s when the designers should figure out how to make it aesthetically appropriate,” says Danny Bortnick, VP of restaurant concept development for Kimpton Hotel & Restaurant Group. The San Francisco-based company has 66 hotels and 87 restaurants and bars. 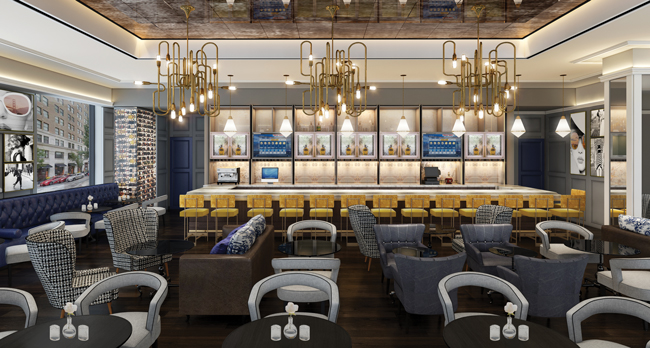 The first step in every bar project is to ascertain the objectives of your client, the needs of bartenders and requirements of the proposed drinks menu.

“Bar design is a ping-pong game between you and the client. Get to know them and discover what their needs are,” says Leah Plevrites, founder of the New York design firm studioBIG. First determine what the operational and equipment needs for the bar are, then worry about designing the rest, she advises.

“From a construction standpoint, make sure you know what the menu offerings are going to be, and get your mechanical infrastructure right,” says Chuck Taylor, director of operations for Chicago-based Englewood Construction. The craft beer craze, for example, means sizing larger chases to accommodate more glycol lines and allowing extra walk-in storage for kegs.

“Throwing equipment behind a bar with little care to placement is thankfully far rarer than it used to be,” says Day. “Today, we’re spending more time on how the employee uses the space from the ergonomics of their workstations, the placement of equipment, and variables to make their jobs more efficient — and, ultimately, create more profitable businesses because of it.”

“You’ll see a lot of mirrors behind the bars I design; they allow bartenders to monitor customers even if they have their backs to them,” says Jacqueline McGee, a principal at Perkins + Will, Boston. “Make sure there is a bartender setup every 10 feet so they don’t have to run halfway down the bar to make a drink.” She also tries as much as possible to locate bottles, glassware, ice bins and equipment under the bar so that bartenders can work without turning away from guests.

“The less the bartender needs to move, the more time is spent making drinks or caring for guests,” says Bortnick.

Since there are so many different types of bars these days, a key element of design is to tell guests what kind of experience they are stepping into at the door.

A recent Englewood Construction project, a BJ’s Restaurant in Livonia, Mich., is a good example, says Taylor. “Right at the entrance is a huge, two-story tower constructed of structural steel that holds rack upon rack of beer kegs,” he explains. Beer lovers can also gawk at the huge chalkboard menu listing available brews.

Other venues range from completely over the top to downright furtive. The newest offering from Houston Hospitality, Madame Siam Sideshow Emporium, is a grown-up version of Disneyland with tongue-in-cheek humor. The vibe, according to co-owner Mark Houston, is eclectic and fantastic and includes a gypsy fortune-teller, a stagecoach whiskey bar, a hall of games and a deconstructed carousel. “Madame Siam Sideshow Emporium will be the greatest mash-up of world-class cocktails, circus antics, nostalgic-but-topical carnival games and mystique that Hollywood has yet to see,” says Houston, who owns Houston Hospitality with his brother Jonnie. The brothers specialize in high-end nightlife hotspots; they operate nearly a dozen wildly different concepts in LA, including La Descarga, Dirty Laundry and Break Room 86.

A hidden door behind a cedar bookshelf inside a yogurt shop leads to Charlotte’s, a speakeasy in Farmingdale, Long Island, New York. “The secret entrance is a cue that this is a quirky and cool bar,” says Plevrites, whose firm designed the space. “It swings open, leading guests from a brightly lit space into a dark and sexy speakeasy.” Adding to the effect of the entryway is a textured, dramatically lit tin ceiling.

With Charlotte’s, Plevrites wanted to balance the grunge and the glam. “Too much one way and it’s just a dive bar; too glamorous and it loses authenticity,” she says. Exposing one entire stretch of wall to its original cinderblock gave the room a rough, basement-like quality; the other wall is treated with glamorous fleur-de-lis wallpaper. To soften the effect of cinderblocks, that wall is draped with velvet, which also improves acoustics.

“Lighting and sound are so, so, so important to atmosphere and tone,” says Ryan at Kimpton. Good lighting can brighten a dark space or make an airy space feel cozy and comfortable. Likewise, bad lighting can make dark and comfy spaces feel harsh and uninviting. “Sound matters too,” adds Ryan, who suggests speakers substantially sized for the space as well as sound-dampening materials to absorb loud conversation. 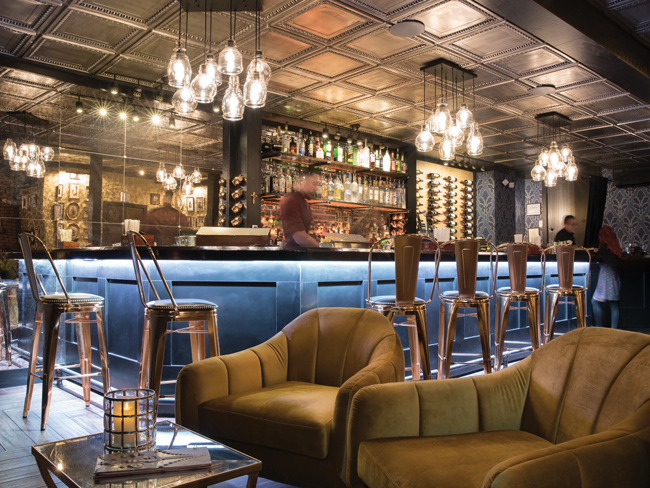 “Functionality ties into flow of the service personnel,” says Plevrites. Bartenders have to be able to reach all parts of the bar easily, and there should be easy access to the floor for waitstaff as well as direct routes to the back of the house. “You don’t want service people having to swim through a crowd with a bucket of ice.”

Moving the crowd through a space is also important. “No one wants to go out and spend an hour trying to get near the bar or waiting on a drink,” notes Houston. The brothers designed Madame Siam’s with a multitude of activities and areas to explore to better direct the crowd flow and keep everyone rotating as the night goes on. “We’ll be there handing out game tokens to anyone who looks like they could use some inspiration, and we guarantee the last thing guests will be is bored.”

“To encourage the crowd to mix, I use different levels of seating, high- and low-tops, standing areas, banquettes, and little nooks with sofas, armchairs and coffee tables,” says Plevrites.

Bartenders may favor a linear bar, but for socializing, many customers prefer the corners of a square bar or curves of a horseshoe bar. With these shapes, groups can more easily gather and converse. That’s one reason McGee wanted to install a curved bar at The W Chicago. “The space was in an historical atrium and perpendicular, rigorous in its architectural aesthetic, and I wanted to break that paradigm, so the bar has a strong curve at the end,” she explains. The bar itself is dramatic. The front has underlit undulating metal that looks like a curtain, and the clear acrylic top is lit from underneath; the backbar is sculpted with chase lighting.

Beyond improvements in dispensing, refrigeration, blenders and more exotic equipment such as rotary evaporators and sous vide, technological innovation pervades all aspects of bar design — often in unexpected ways.

Take the rise of smartphones, for example.

“Instagram,” says Plevrites. “People love to take pictures of cool places. So designers are challenged to be more innovative with every project they create.” And customers these days demand charging stations for their devices. “We conceal the outlets under the bar and behind banquettes.”

“Customers are demanding Wi-Fi everywhere they go,” reports Taylor, “and the signal has to be as strong in the restrooms as out in the bar.” Care has to be taken not to cause interference between other wireless devices — POS systems, service personnel communication, and TV or music channels.

“Bars of the future will solve or eliminate all cash-handling and financial transactions,” says Bortnick. “This is an area that is vital to ownership profitability but also to improved guest experience and throughput by eliminating more steps and variables.”