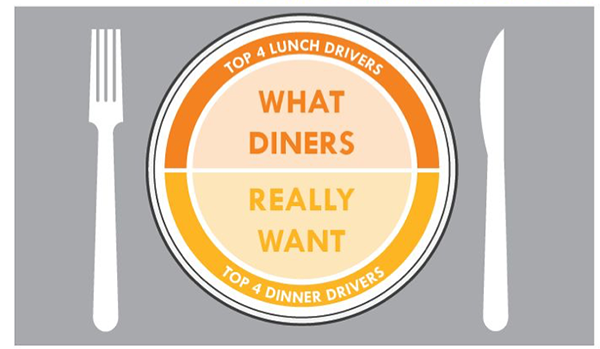 What consumers say they want from a restaurant meal is not necessarily what determines where they dine out.

A two-part research study by Catapult Marketing, “Experience Counts: Unmasking the Drivers of Brand Preference in the Quick-Serve and Fast Casual Restaurant Category,” isolated the stated intent of restaurant selection from the true drivers of brand choice. In phase one, a survey of more than 1,000 U.S. consumers revealed a pattern of selection driven largely by practical factors such as type of food, choice of cuisine, location and affordability. In phase two, a survey of more than 2,000 diners found that many of those factors fell to the wayside, replaced by a variety of influences related to the type of experience that diners were seeking. 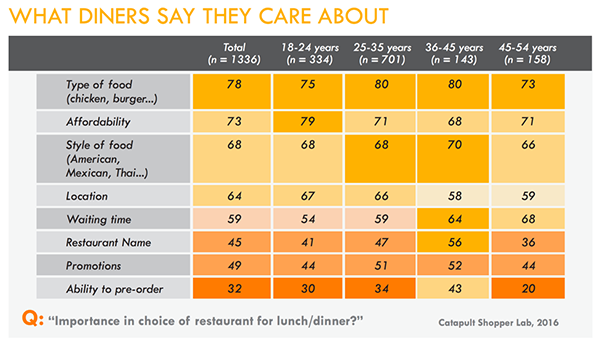 “The back and forth about ‘where to eat?’ isn’t a rational or functional conversation. There are deeper emotional layers that drive brand selection,” says Doug Molnar, VP, senior director of planning at Catapult. “Universally, people claim that the primary drivers of restaurant selection are affordability, great tasting food and a satisfying meal. But when we determine what actually drives brand preference, those attributes are replaced by factors such as offering traditional flavors and a home-made taste (for lunch), and seeking new food options or a trendy place (for dinner).” 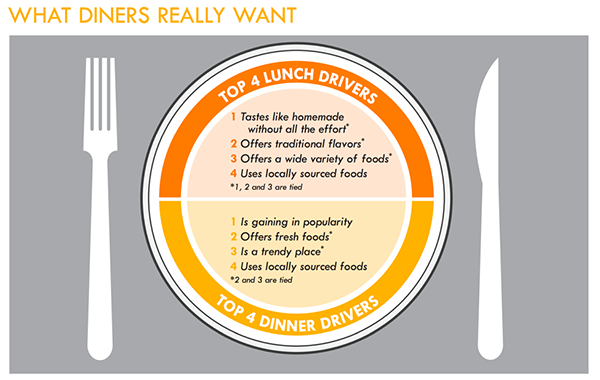 The choice of where to eat lunch was driven mainly by logical and emotional inclusivity concerns related to menu selection, familiarity and comfort (“tastes like homemade without the effort,” “offers traditional flavors,” “a wide variety of foods” were the top three attributes in derived importance), as well as by the desire for communal appeal (“fits well with more lively company and conversation” was tied for No. 4 with “offers high quality foods”). By contrast, dinner was seen more as an aspirational occasion and an opportunity to seek out new dining experiences.

Rather than expressing a strong desire for quality or great-tasting foods, respondents rated attributes such as “gaining in popularity” and “is a trendy place” at the top of the list.

The research also revealed Millennial diners and their younger age cohorts are particularly cost-conscious consumers, placing affordability at the top of the list of stated purchase intent. However, the second survey revealed deeper experiential forces, such as seeking a trendy place to eat, driving the restaurant choices of Millennials.

Millennials like to try new things and often use social media to share food experiences with friends and family, and this may heavily influence their choice of restaurant. Seeking “a trendy place” topped the list of attributes in derived importance for both the younger (18 to 24 years old) and older (25 to 34 years old) sub-groups in the survey, while “introducing new food options” was shown to be slightly more important for the younger of those groups. On the other hand, attributes such as “wide variety”, “great tasting foods” and “foods you crave” were not as influential.