Though California and Germany both have outdoor dining traditions, the two aren’t often connected. They are brought together at Hinterhof, a new Vegan beer garden located in Los Angeles. The restaurant opened in January with interior design, architecture and landscape design by Aaron Neubert, founding principal and design director at Aaron Neubert Architects.

According to Neubert, “the architecture was meant to engage the lineage of the German beer garden. It’s meant to evoke the styles of communal eating and celebration that occurs in those ensues while also engaging the Southern California lifestyle with indoor/outdoor living and more casual situations.” 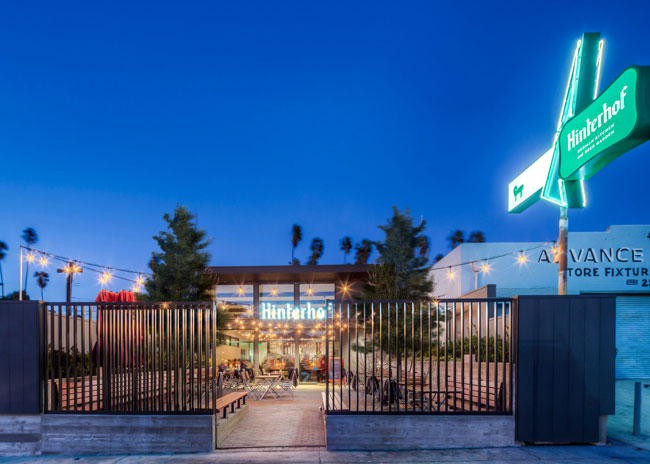 This mixing of German and Californian can be seen in the location of the beer garden itself. In traditional German beer gardens, the outdoor area is in the back of the restaurant, making it more private and less communal.

“We inverted the design to engage the street,” says Neubert. “Instead of having the beer garden tucked in the back we rotated it so that you enter into the beer garden. It’s family-friendly, animal-friendly and engages the community rather than being isolated or secluded to the rear.” 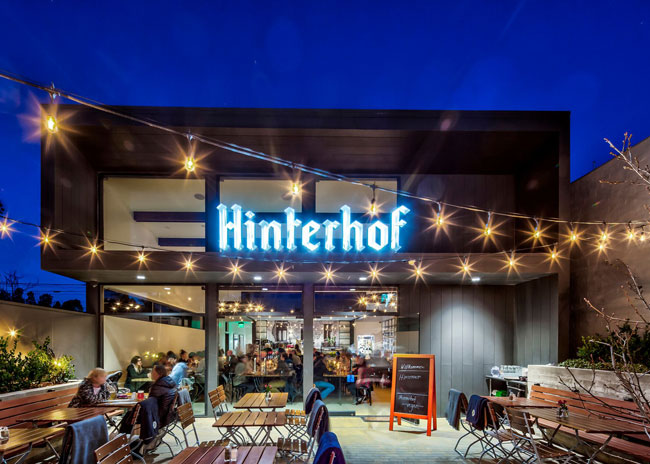 Entering the outdoor seating area, guests will find a space lined with native plants and three maple trees. As these plants mature, it will make the space somewhat more internally focused and private, but still welcoming to outsiders. 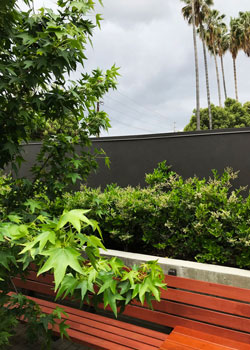 Visitor will also find furniture that’s evocative of a traditional beer garden, including folding chairs and bench seating that’s actually built into the planters. At the end of the garden, the outdoor and indoor spaces connect via large glass doors.

“The amount of transparency between the exterior of the restaurant and the interior really makes it feel like you are part of the same atmosphere whether you are inside or out,” says Neubert.

Inside the restaurant, guests will find more German-inspired design, including a pair of long custom-made hardwood community tables that run the length of the restaurant. Smaller two and four tops are located along the sides, offering a choice of seating. 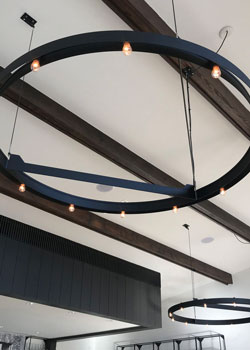 Overhead are round metal light fixtures, also custom-made. The fixtures, says Neubert, “evoke those traditional wagon wheel lights you see in more traditional beer gardens, but are a modern take on those.”

Along one side of the dining room is a large horizontal window. Not only does this let in more light throughout the day, it also provides a view of something other than the beer garden. “It’s more of a Japanese landscape design idea we work with a lot. We are not looking to property the owner possesses, we are looking to the landscape of the community to make the space feel larger and more engaged,” Neubert says. 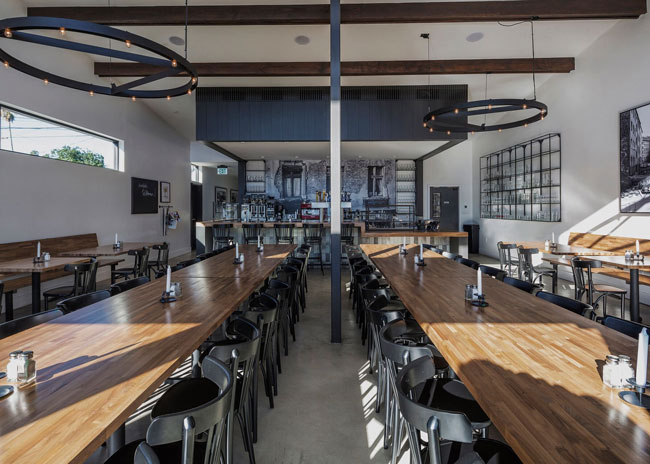 Hinterhof’s actual bar serves as an endcap to the front of the house. This area features a solid wood bar top and a bar face clad in cement tile. Behind the bar is a vinyl wall covering showing walls and windows of an actual German building.

Such images, in fact, are used throughout the restaurant, and are meant to evoke views of small outdoor gardens and dining spaces, dubbed hinterhofs, which serve as the source of the operation’s name, says Neubert. 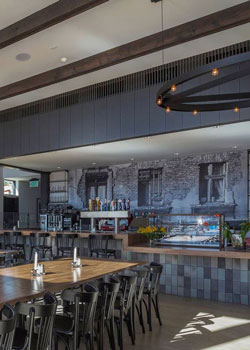 “If you study these photographs carefully, many of them are of these hinterhof spaces. These images of back alley or backyard communal spaces or of little vignettes found around Berlin capture the culture of the beer garden or the hinterhof.”