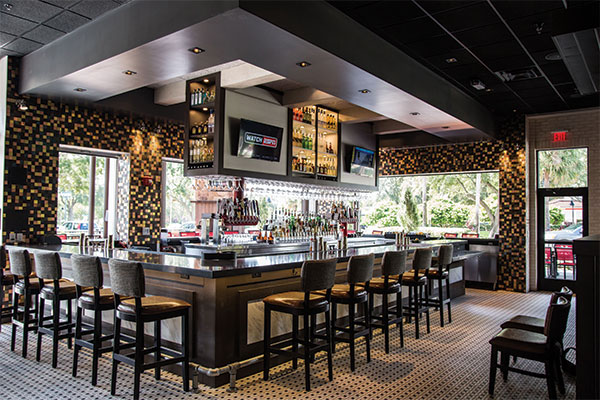 The indoor/outdoor bar has a set of beer lines that run through the ceiling down to a red T-shaped feature with 10 separate taps. From the wall tile to the flooring, it feels like a separate space from the main dining room and outdoor patio.

Competition for the dining dollar is fiercer than ever. High-quality options are available from a multitude of restaurants; grocery stores have entered the fray with hot and cold bars and even cooked-to-order offerings; takeout-only businesses specialize in pre-portioned meals for the calorie-conscious; and mail-order services give people all the ingredients they need to make a delicious meal at home. With so many choices available to consumers, offering good food in a comfortable environment may not be enough.

Acutely aware of this, rib specialist Tony Roma’s has undertaken a comprehensive update to its concept. According to Chief Marketing Officer Jim Rogers, this effort is meant to bring the 45-year-old chain back to its roots as a place that offers a fun experience with good food. The initiative, he says, includes changes to the company’s branding, marketing, menu, service experience and restaurant design.

Last September, the chain rolled out a new prototype at its flagship location in Orlando, Fla. The restaurant offers several distinct spaces that can accommodate all sorts of guest occasions, from a family dinner to date night to business meetings to celebrations. “It’s a dramatic change from being just an indoor restaurant with booths and tables where people come in and eat,” says Rogers “We’ve really expanded the occasions that they can use the brand.” 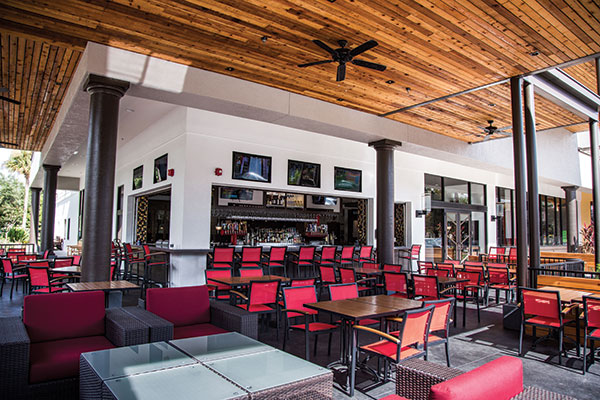 The new outdoor patio offers bar, table and lounge-style seating, providing guests with different types of dining experiences.In truth, the chain’s flagship store was due for a makeover. The restaurant, located on tourist-heavy International Drive, had been in the same building for 22 years, according to Rogers. While some minor updates had occurred — new paint here, new carpet there — in all that time, it hadn’t undergone a major redesign.

By any standard, this project qualifies as major. According to Executive Vice President and Chief Operating Officer Bradley Smith, the restaurant — from the front door to the kitchen — was stripped down to its studs and rebuilt. This allowed for major changes in its floor plan.

One of the most significant changes was going from a multilevel restaurant — a step or two down to the dining area, a step or two up to the bar/lounge — to a single-level operation.

With no steps or ramps to design around — or for team members to navigate — the operation is much more functional than before, says Dave Culley, the chain’s regional vice president for the U.S. In addition, removing the needed steps and ramps freed up space that is now used for revenue-generating seats.

The biggest floor plan change, however, involved the bar. Previously, the bar was in the middle of the restaurant. Now it is located on the left side of the operation as part of an indoor/outdoor bar and patio. This new feature is one of the highlights of the redesigned Tony Roma’s.

On the inside, the bar is surrounded by black-and-white tile laid out in a herringbone pattern. Though the area has several windows, the bar’s few small sections of wall are covered with copper-hued tiles. The bar itself has a solid-surface top, while the front of the bar has heavy-duty vinyl panels and a marble finish. The panels, says Culley, can be easily removed when the bar needs electrical or plumbing service.

The outside portion of the bar is opened through a set of glass garage doors. It features bar seating and a service window that allows waitstaff to easily pick up orders for patio guests. 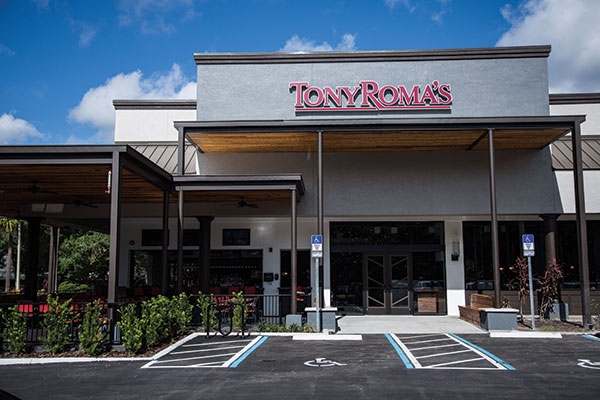 The remodeled store includes new signage. To the left, the patio juts out, drawing the eyes of passersby.While the previous design did have a patio, it was much smaller and basic. “We reconfigured the parking lot to create the patio, so we lost a couple of spaces, but now that patio juts out from the restaurant,” says Culley. “If you’re walking or driving down International Drive, you can’t help but see this beautiful building.”

The patio is a covered space — a near necessity given Orlando’s frequent rain showers — with stained concrete flooring. It features multiple flat-screen televisions above the bar and one above an outdoor fireplace. Along with the bar seating, it offers table seating and outdoor lounge furnishings, all of which offer a different type of customer experience than traditional casual-dining operations.

The interior dining areas offer plenty of options as well. These spaces have a somewhat masculine feel with plenty of warm wood tones along with some metallic elements. The floor is a wood-style vinyl that is easier on the feet than hardwood or ceramic, says Culley.

The main dining area now has an open kitchen, which adds energy and drama to the room. The large window into the kitchen has a small open space in front of it created by a set of six-person booths attached to a half-height wall. Smaller booths, meant for parties of four, sit against other walls in the space, while the center of the restaurant is filled with four- and six-top tables that can be easily pushed together for large parties.

“The Orlando convention center is just down the street,” Rogers says. “We get a ton of groups coming in from there. When you get a 15- or 20-person party, you’ve got to have that flexibility. When we talk about different dining occasions, that’s one way we’ve built it in.”

Orlando’s booming convention business influenced the restaurant’s design in more ways than one, though. To accommodate business gatherings, the redesigned operation has three private dining spaces, each with its own audiovisual equipment. Two of the rooms can be combined into a single large space (with synchronized AV equipment) by retracting a folding panel wall.

With total seating for 108, these rooms take up a good chunk of the operation’s revenue-generating space. When not being used by a private party, they can be used as regular seating thanks to design elements that connect them to the main dining room. The walls that create these private spaces have several large windows that connect to the main dining area, along with large sliding barn doors. During functions, the doors are closed and curtains drawn. When there’s not an event, both are opened to create general seating. 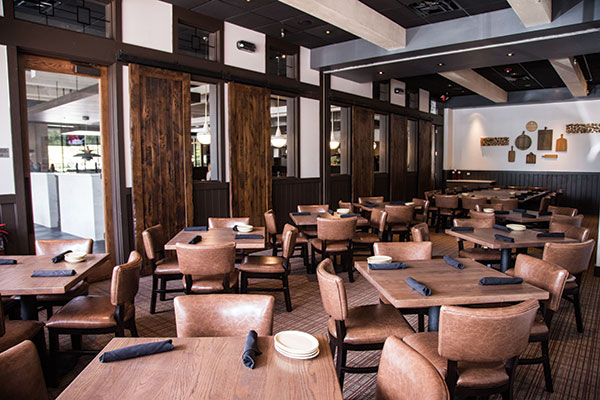 The private dining areas can connect to the main dining room through windows and open doors, while carpeting dampens noise when doors are closed for a function.
Photos courtesy of Tony Roma’sWhile the new design creates a much livelier space that can offer all sorts of dining experiences, getting to this point was challenging.

While the initial construction timeline was set at 135 days, the entire project took nearly twice that long, according to Smith. Some of the overrun was due to the sheer size of the project. Removing a bar, building another one, adding a covered patio — it’s easy for all those to take longer than anticipated, he says.

Also adding to the delay was simply the age of the building. Twenty-two years had passed since its last remodel, and with decades of work by different plumbers, electricians, etc., there wasn’t a reliable set of plans that showed the company exactly what it was dealing with. “You run into things that you have to fix on the fly or fix something that you didn’t know needed to be fixed until you tore something up. That contributed to the delay in the construction process,” Smith says.

In one case, for instance, the operation found an I-beam at a spot slated for a large window between the restaurant and the outdoor bar. The company adjusted by putting a smaller window on one side of the I-beam and a service window, originally planned for another location, on the other side.

An even bigger challenge involved the restaurant’s beer lines. The new indoor/outdoor bar has 20 beers on tap. After the company brought the operation down to a single level, though, they found that the building didn’t have the right slope to run underground lines from the main walk-in cooler to the bar — a distance of about 100 feet.

To solve this problem, 10 beers from the walk-in (typically from the major national breweries) now run overhead through chilled lines in the ceiling. The other 10 are craft beers that are held in pony kegs at the bar itself and run through underground lines. “That ended up giving us these cool towers with one on the top of the bar and the other hanging from the ceiling,” says Smith.

Operating in a Construction Zone

One of the biggest challenges of this project, though, was self-imposed. Instead of shutting down during construction, the restaurant stayed open throughout the entire project. The reason was simple: This location is one of the top performers in the entire Tony Roma’s system; the company didn’t want to lose its revenue, even for a few months. What’s more, by staying open, the restaurant didn’t risk being forgotten by regular customers or concierges at nearby hotels.

At the start of the project, the contractor built a demising wall that split the operation in two. Construction then began on the left side of the restaurant, which included the patio and new indoor/outdoor bar.

The right side of the restaurant, with the legacy bar still up and running, stayed operational with limited hours. A noise ordinance in the area forbids construction between midnight and 7 a.m., normally prime hours for this sort of project. That meant contractors had to work from 7 a.m. to about 3 p.m. Dinner service began at 5 p.m.

Once the left side of the restaurant was completed, service shifted to that area. To make this possible, the contractors moved the demising wall a foot toward the already complete section, then put up additional walls to create a corridor to the restrooms. The demising wall was removed entirely in the last days of the project, allowing the construction team to complete the final finishes.

According to Smith, the entire process was challenging. At times, the restaurant just didn’t have everything it needed to take care of its guests. For the most part, customers were forgiving. They did, after all, walk into the operation knowing it was a construction zone. The most significant pushback, though, came during the restroom remodel. “When you take people down to a smaller bathroom footprint, you’re getting into their creature comforts. That’s always a challenge.”

With the new Tony Roma’s open for several months now, the chain’s focus is rolling out the new design system-wide. As existing stores are up for renovation and new stores are built, this will be the design they follow.

Of course, some elements will vary by location. The patio may grow or shrink based on available space. Depending on what the market can support, the number of private dining rooms will also likely change. A restaurant in a smaller city without a large convention business may not need three private dining areas, Culley says.

The exact specifications for each store, however, don’t matter as much as the overall approach. According to Rogers, this new design works because it applies the spirit of the original concept to a modern restaurant environment. “We want to be true to who we are. I think that’s something we have lost touch with in the last 10 years,” he says. “This transforms the physical environment, but it also gets us back to who we are. We’ve gotten back to being a fun brand and innovating around what we’re known for, and that’s ribs.” +