It’s tough for a single operation to stand out in a city with 8.5 million people and tens of thousands of bars and restaurants. Based on the originality of its concept alone, though, New York City’s Poción definitely has a chance.

Located in the Washington Heights neighborhood, Poción is a vegan bar/restaurant inspired by the food and drinks of Latin America in general and the Dominican Republic in particular — the homeland of owner Alex Peralta. As its tagline states, Poción is dedicated to “healing through booze and natural bites,” with signature cocktails that include tinctures and herbs with homeopathic properties.

According to Leah Plevrites, founder of studioBIG and Poción’s designer, the menu’s combinations and concoctions inspire not just the restaurant’s name but also its design. 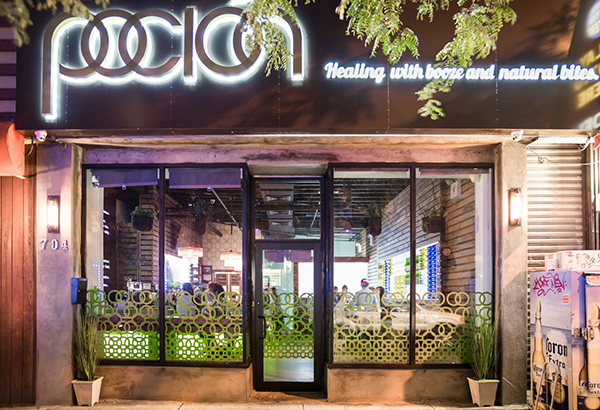 Poción’s storefront design includes a series of interlocking green vinyl circles on the front windows of the restaurant, serving to drive home the theme of combination while providing some privacy to guests sitting at the front tables.  “We didn’t want it open like a retail store front. We wanted it to have some opacity, but we also wanted people to know what this was about walking down the street,” Plevrites says.

Several interior design elements also convey the idea of potions and concoctions. The biggest design challenge, though, was the space itself. Like many other operations in New York City, Poción has a small, rectangular footprint. Plevrites’ main goal in the design was to make the front of the house feel bigger than it actually is. She also set out to calm the space by concealing doors to the bathrooms and service areas. And, of course, the design had to be completed on a strict budget.

Plevrites checked all those boxes by using two-by fours to cover the right-hand wall of the restaurant. Stained and laid horizontal, this finish, while economical, makes the space feel bigger by giving it the impression of length. 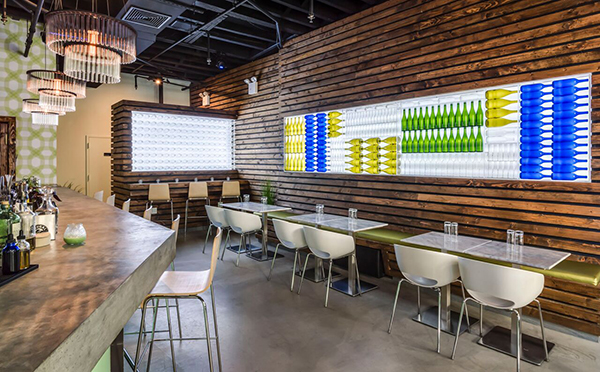 At the same time, she recognized that a wall of nothing but two-by-fours was simply too much wood. To break up the wood, Plevrites designed a backlit LED display cut into the wood, stocked with dozens of bottles that sit both horizontally and vertically in the space. It breaks up the darkness of the wood as well as the horizontal lines. It also subtly reinforces the theme.

Notably, there is no covering to the bottle wall but the bottles are glued in place. “We knew there was a risk being in a bar. Somebody might just grab one of the bottles,” she says. “It has to be maintained week in and out, just to check for safety. But we did check to see how it looks covered and it wouldn’t have the same feel.”

While the two-by-fours run the length of the right wall, a few feet from the back Plevrites used those same boards to create a partition that hides the restroom doors. Jutting out several feet from the right wall, this partition is only three-quarter height, preventing it from enclosing the space. It also has a bottle display, this time of only clear bottles, which provides a variety to the design.

The restaurant-facing side of the partition makes efficient use of the space with a handful of barstools and a drink rail. The side facing the bathrooms has a community sink made of concrete. The shared sink, says Plevrites, allowed for smaller individual bathrooms.

“We wanted each decision in the design to have a function. Not only does that wall cover the doors, which were an eyesore, it also serves as a place where people can look in the mirror and wash their hands in a made environment.”

While the right side of the restaurant features primarily wood, the left side, starting from the back, begins with wallpaper patterned, once again, with green linked circles.

Moving toward the front, the bar back has a small set of shelves with apothecary-style bottles that hold herbal tinctures, bitters and other cocktail ingredients. Next to that is a large close-up photograph of mamajuana, a popular Dominican drink consisting of herbs and tree bark soaking in rum, wine and honey. In front of the photo are several small concrete planters that hold herbs bartenders use to make cocktails. These planters, says, Plevrites, can be moved to the front windows during the day, giving the herbs plenty of light to grow. 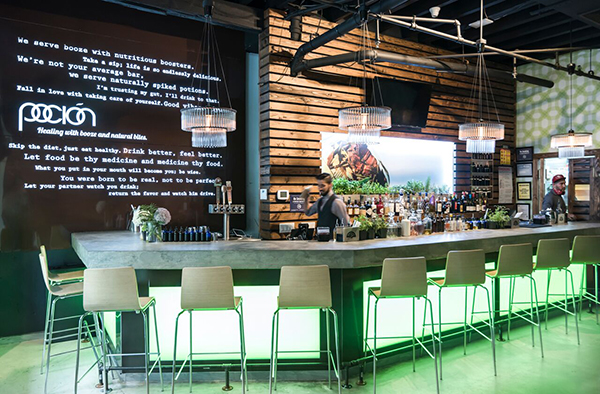 Following the photo is a large piece of sheet metal with the operation’s logo and a brief exclamation of the concept laser cut into it. Like the bottle walls, this feature is backlit with LEDs.

The bar itself has green Plexiglas panels on the front (also backlit by LEDs), while the bar top is made of sealed concrete, providing a hard, earthy element to offset some of the restaurant’s more delicate features, such as the herbs and bottle displays.

Perhaps the single most delicate feature at Poción are the chandeliers that hang over the bar. Sourced on Etsy, these pieces are made of wooden rings with dozens of test tubes dropped into a series of holes drilled into the wood.

“It creates such a beautiful, delicate chandelier but a modern version. It fits in perfectly with the scientific concept of mixing, concocting,” Plevrites says.

Mixing and concocting, of course, is what Poción is all about. With a hip, fun design that communicates this idea along with efficient use of space in an expensive city, Poción may have hit on the formula for long-term success.