Known for its glamorous, high-energy spaces and focus on good food and wine, Del Frisco’s Restaurant Group (DFRG) has taken the country by storm in recent years, in part with its high-end, $100-average-check Double Eagle Steak House concept.

The company now operates 11 Double Eagle Steak House units in major markets nationwide. They range in size from 12,500 to 24,000 square feet and average $14 million in annual revenues. The newest of these showpiece restaurants opened last September in Washington, D.C., and is another jewel in the company’s crown. 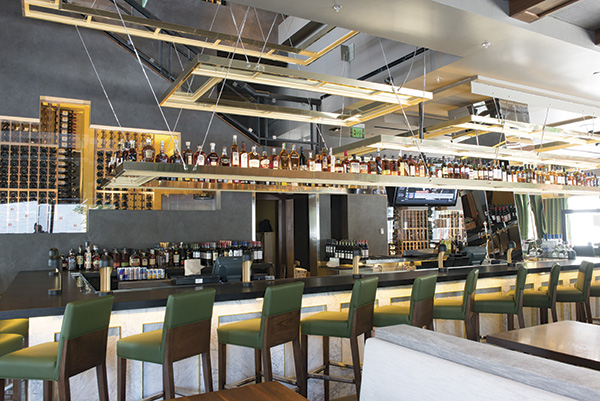 The focal point of Del Frisco’s Double Eagle Steak House restaurant in Washington, D.C., is a sculptural glass and polished brass “tiered shelf” holding liquor bottles and lit by LED bulbs. It hangs over the restaurant’s large marble-topped bar and connects to the open-air second-floor smaller bar and main dining room beyond.It’s located in the vibrant new CityCenterDC, a downtown mixed-use development with condominiums and apartments, retail shops, office space and restaurants. Bill Martens, vice president of development and construction at DFRG, says it took the company eight years to find such a flagship location. The restaurant has a look and feel consistent with other Del Frisco’s Double Eagle Steak Houses — all of which tout dramatic design elements such as soaring ceilings, glass store fronts and breathtaking wine displays — but was uniquely designed for the D.C. market.

To help develop the CityCenterDC unit, Del Frisco’s hired The Johnson Studio, the same firm that designed the Double Eagle in Boston as well as several of the company’s more casual Del Frisco’s Grille units. The Johnson Studio collaborated with Del Frisco’s execs and contractor Shawmut Design and Construction to build out the 3-level, 17,700-square-foot interior space into a 420-seat restaurant with 2 bars, a wine cellar/room, multiple private dining rooms and a courtyard patio that adds 40 additional seats.

“We wanted to make a space that was fresh and contemporary and warm but at the same time touch on elements of a traditional steakhouse, with wood paneling and marble and good lighting,” says Bill Johnson, senior principal at The Johnson Studio. Much more modern and accessible to diners of all types and age groups, “this is anything but your typical old world men’s club,” he notes.

“We wanted people to come in and feel comfortable whether they’re in a suit celebrating a deal closing or they’re wearing a nice pair of jeans and want to sit at the bar and order off the menu,” Johnson adds. “We like that social element and want to drive energy throughout the restaurant.” 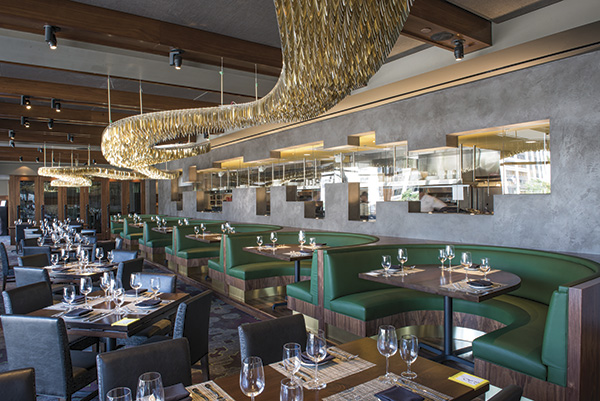 “We were very particular about the cuts of wood that were used,” Johnson says. “We wanted a straight grain, lighter colored walnut versus the darker mahogany you might see in more traditional steakhouses to cater to a younger demographic and make sure we were on trend with the area.”

On the second floor, a mixture of bar seating, tables and small banquettes keep the energy alive in the bar area, while the other half of the space offers a traditional dining experience, including views into the kitchen through Tetris-like geometric cut-outs in the wall. “The highlight of the dining room is a beautiful, twisting ribbon of brass leaves creating a sculptural chandelier down the length of the room toward the private wine room beyond,” says Johnson, noting that the piece — with well in excess of 1,000 brass leaves — had to be brought in in pieces and assembled on-site, just like the tiered liquor shelf.

Large pendant lamps with sound-absorbing fabric, floor lamps and spotlight bulbs showcasing the food help create a “variety of light” and warmth throughout the space, according to Martens. A fabric-covered ceiling and draperies further help with the acoustics.

“Because we have two bars and an open atrium, sound carries. We consulted with acoustical engineers to make sure we had enough sound-absorbing elements so it’s not so painfully loud,” says Martens. “We wanted the space to be energetic but not uncomfortable for guests.”

Wine and Art on Display

Known for its extensive wine list, the Washington, D.C., Del Frisco’s Double Eagle Steak House features a whopping 1,200 labels and 10,000 bottles — bottles that had to go somewhere. Weaving throughout each area of the restaurant, a temperature- and humidity-controlled, glass-encased wine “room” or cellar showcases the bottles positioned horizontally. To access the area, staff use a small walk-through space behind.

A portion of the wall that provides views into the kitchen offers additional glimpses into the wine cellar, which also weaves its way into the private dining space on the second level that accommodates intimate dinners and meetings with full A/V equipment and laptop hookups.

The main private dining room on the lower level, with total capacity of slightly more than 100 seated guests, also offers views of the wine collection. Pocket doors can partition the room into smaller dining spaces or retract for larger parties.

Thoughtful artwork remains just as important to the Del Frisco’s brand as the wine, and the D.C. location, with its whimsical, eclectic and partially local collection, is no different. “One of the things that I love about working with the company is that they appreciate good art,” says Johnson. “We spent a lot of time with the CEO visiting various galleries and looked at probably 100 or more pieces of art before choosing the 25 or so that we installed.”

While most Double Eagle Steak Houses take six months to build, this location took an additional month because of the nature of the development. The restaurant covers the first 3 floors and a below-grade level of the 10-story condo building.

All in, the design and construction process took slightly more than a year and proved to be one of the more challenging build outs yet due to the nature of the leased space. 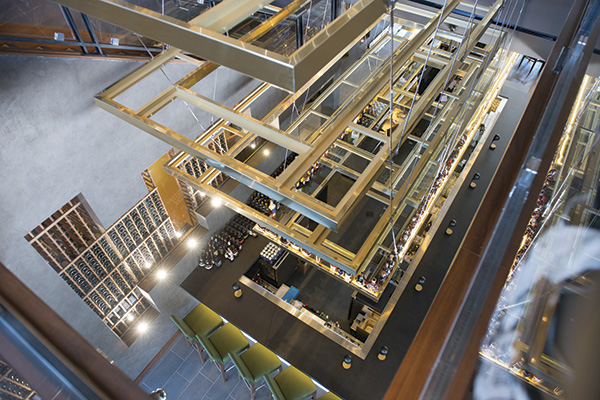 The three-level, 17,700-square-foot space features Tetris-style geometric cut-outs in walls providing views into the wine room and kitchen.“The space was not specifically designed for a restaurant — it was just a raw, empty shell so that was the biggest challenge,” says Dave Lysowski, senior project manager at Shawmut. Though the space included HVAC, ducts and plumbing had to be carefully connected to reach the second-floor kitchen without disrupting the condominium lobby space below.

“We had to carefully pick different areas in the lobby to open up the walls for plumbing and work overnight because people were walking in and out of the space all day. There was also an expensive piece of artwork hanging that they didn’t want us to go near,” says Lysowski, noting that the team was able to complete all the plumbing through a mail room ceiling in one night. “We also had to move the kitchen equipment around to make the system work and pick the right spots for the floor drains.”

“Putting a kitchen on the second floor is always challenging, but even more so here,” says Lysowski. Operationally, dishes have to travel to the lower level prep kitchen and dishroom area, so the team installed a dumb waiter in addition to the service elevator.

The project also proved to be more challenging than most because of its location in a LEED-certified lifestyle center. “There were certain standards and guidelines we had to follow in regards to the building,” says Martens. Although the restaurant was not obligated to follow strict guidelines for the kitchen, the team did incorporate energy-efficient elements and lighting throughout the space. Floor-to-ceiling glass walls overlooking the patio and plaza beyond bring plenty of natural light into the dining areas and expo kitchen.

In the end, the challenges proved to be worth the cause. “With such a dramatic and attractive space, we knew there would be challenges to make it work, but we knew it would be a magnificent finish,” says Martens.

Look and feel. We wanted to go for a more contemporary steakhouse, one that would fit in with the scene in D.C. and have that feeling of power and presence. In doing that, we incorporated more traditional elements like wood paneling but in a modern way with brass panel inlays and cleaner lines. Black-and-white houndstooth drapery creates a masculine feel but the polished brass and floor lamps help soften the space to attract men, women and younger crowds. Large community tables that seat up to 10 people help bring the space down to a more personal level.

Signature features. For the tiered liquor shelf, we wanted something that would tie the two floors together and that could be both functional and sculptural. For the brass “leaf” light fixture, we wanted it to undulate and flow throughout the space as a beautiful focal point resembling the shape of the Potomac River. For the wine cellar, we created small windows with jagged-edged openings in the walls so you have that peek of wine throughout the space.

Color scheme. It’s designed to create a very powerful feel to the restaurant but also incorporate traditional elements. The use of white marble is a nod to D.C., the same marble you see in the monuments. We also incorporated black and charcoal throughout the space, but with a pop of a brighter emerald green rather than traditional hunter green to evoke that feeling of money and power in a more contemporary way.