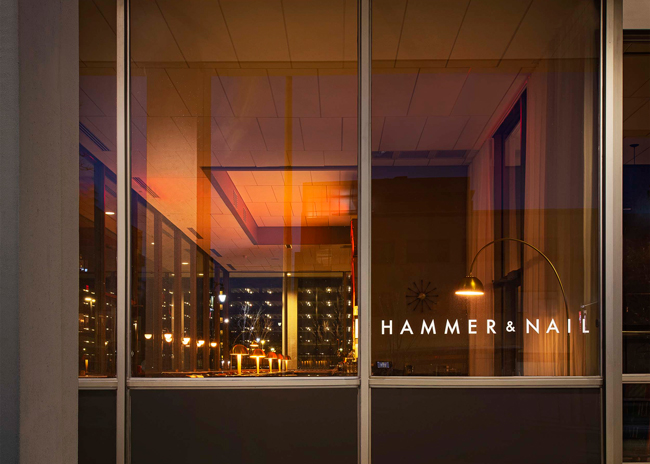 Located in a rehabbed apartment building that once housed Detroit’s carpenters’ union headquarters, Hammer & Nail is cocktail bar with a decidedly mid-century modern aesthetic that reflects the building’s original design.

The building and bar are owned by The Roxbury Group, and the bar was designed Patrick Thompson Design of Detroit.

The centerpiece of the design is the neon light display behind the bar, which features a hammer striking a nail. Previously, two such pieces were on the top of the building’s exterior, highlighting the connection to the carpenters’ union and serving as an icon on the Detroit skyline.

When the new owners began rehabbing the structure, one neon sign was given to the union, and the other was earmarked for the bar.

“We worked with a local neon light maker. When it was up at the top of the building and became a beacon to be seen miles away, obviously the light output was different from what we wanted to have when you’re sitting five or six feet across from it. We had it modernized and reworked so it could work with a basic flip of a switch,” says Heather Mckeon, director of operations for Patrick Thompson.

The presence of this historic piece dictated much of the design of the back bar. The liquor display is only three tiers high, with a short shelf up used for each tier. The nail, meanwhile, looks like it is literally being driven through the back bar counter and cabinetry, serving as an Easter egg for attentive guests.

The neon light element isn’t the only cue the operation takes from the building’s past. The elevator lobby walls are clad in black stone, so the designers chose a matching marble for the bar top. The bar face embraces the mid-century modern look with tambour panels.

Domed brass light fixtures are built into the bar top. Similar fixtures hang from window mullions, but no fixtures are hung from the ceiling. This design choice, says Mckeon, takes advantage of the space’s high ceilings while simultaneously creating cozy spaces.

“We wanted to keep everything down at the human, intimate level,” she says. “At night it is quite a striking view to have all the warm glow and the dome lights.” 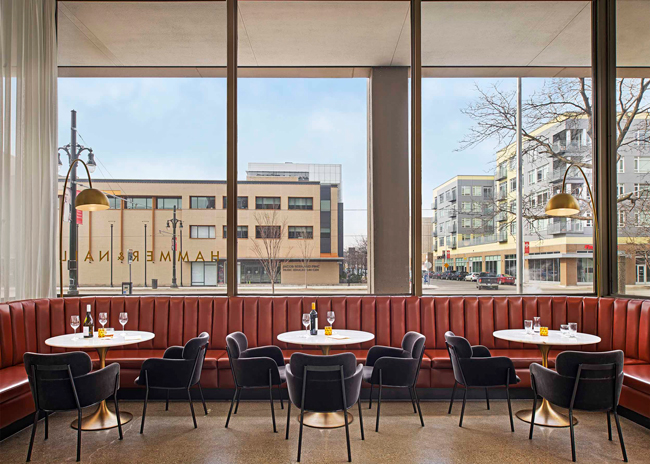 The bar is a small space, so its furniture package is kept intentionally simple, with just one type of stool, low top, high top and chair. The banquettes at both ends of the bar, though, stand out. Upholstered in a shiny red vinyl and curved into a U-shape, these add a sense of luxury to the operation while also creating more intimate spaces.

“It is very successful at night when you see parties or couples tucked into those corners and creating their own little experience,” says McKeon. 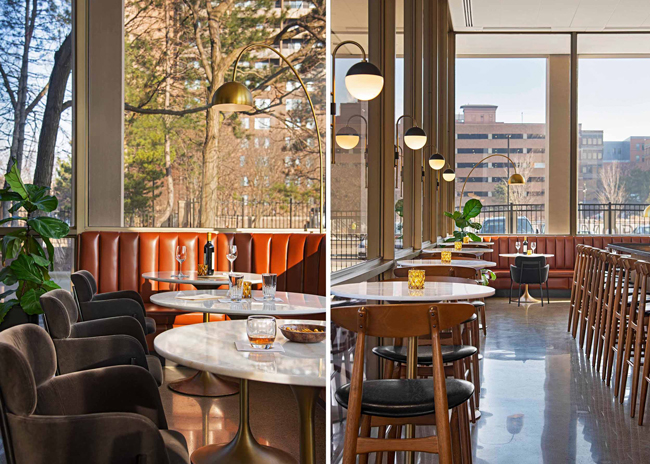 In addition to taking advantage of the building’s existing design features, Hammer & Nail makes use of its natural surroundings. The view from one side opens up to a tree-filled courtyard. Sitting at the window by the courtyard can feel like sitting outside, McKeon says.

Hammer & Nail plans to reopen in accordance with local laws as soon as they are allowed to do so.