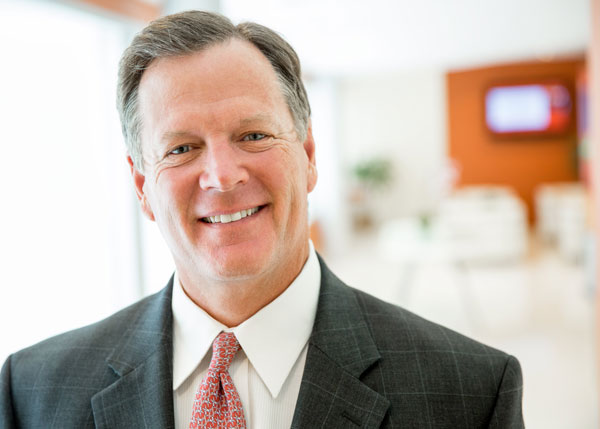 A year ago, Saladworks opened its first in-store kiosk at a grocery store in Philadelphia. It’s set to open two more in March. All three units are owned by Brown’s Super Stores Inc.

The kiosk, located inside a ShopRite, is less than 200 square feet — about a tenth of the size of Saladworks’ typical spots — according to Patrick Sugrue, CEO of the West Conshohocken, Pa.-based chain.

Patrick Sugrue spoke to restaurant development + design about the move into grocery stores.

Why was going into a ShopRite appealing?

PS: ShopRite is obviously a reputable grocery store, but for Saladworks this first test was really about partnering with Jeff Brown. He and his organization have a true commitment to serving good-for-you food, which truly resonated with Saladworks. We feel honored to work with an organization that shares so many of our core values.

Where are you located in the store?

PS: It was important to be in the fresh produce department but even more important [to be] in the shopping flow. Consumers travel the perimeters of the stores, so being seen immediately gives you the chance to get the impulse buy before they’ve finished shopping. So being in the front of the store, early in the traffic pattern, was crucial.

How do you operate in such a small space?

PS: First, it has no dining room because we share tables and chairs with the rest of the food service area at ShopRite. We also share some back-of-the-house space with ShopRite for prepping and refrigeration. They had extra space, so it helped cut down on overall size and cost.

What were some of the challenges in going into a supermarket?

PS: Visibility was our first concern. How do we grab the attention of the shoppers? After extensive discussions with ShopRite, they rearranged the front of the store to put us right in the middle of the produce section. Having a small prep area was also a challenge, and we’re looking to take some of our prep upstream, outsourcing it, which would also mean we need less storage and refrigeration. Then we’ll do the sexy prep — lemons, avocados, eggs — in front of the customers.

We put as much refrigeration in the front of the house as we could, and it really forced us to be efficient in prep and par levels and filling our salad case.

Do you anticipate going into more supermarkets?

PS: Absolutely. We have two more opening with the Brown’s ShopRite organization in March. There are another three or four on tap for the next 12 to 18 months. We hope to expand to other markets following the successful openings of these stores.

Why are supermarkets a ripe channel for you to move into?

PS: Supermarkets are an excellent opportunity for us to expand our channels of distribution. With such a wide variety of prepared salads sold in grocery stores, it’s a natural extension for us to offer Saladworks products to those consumers.

You said you need to think of omnichannel alternatives; what other avenues look intriguing to Saladworks and why?

PS: We have had some amazing success — both from a sales perspective and a consumer response perspective — with our college locations. The students at both Auburn University and Temple University have fallen in love with the Saladworks brand and we look forward to replicating that success at other universities. We have had great success with airports because people are getting to airports earlier, so have to be there longer and the other food options are mostly indulgent — pizza, burgers, fried chicken. So, we are looking to expand that presence. In addition, travel plazas, large office buildings and hospitals are key targets for us as we continue to work with multiple nontraditional partners.

Why is it important to have an omnichannel approach to development?

PS: With an omnichannel approach, you achieve a few imperative brand goals. You shield yourself from the negative effects of major changes in the real estate market. By diversifying your portfolio, the brand can evolve with the changing times. In addition, omnichannel allows you to reach a wider audience. It allows for maximum brand awareness and loyalty.

Saladworks is putting greater emphasis on technology. What do you plan on introducing and why?

PS: We spent a few years putting foundational technology in place that would sit at the core of our technology infrastructure. In 2019, Saladworks will roll out an enhanced online ordering program that features a “good to go” pickup station in store. A new consumer and franchise website will feature our enhanced gift card program. Stores will begin accepting ApplePay and kiosks for mobile orders will be tested in some locations.