Owned by Heirloom Hospitality, the restaurant was designed by Great Lakes Culinary Design, a division of Great Lakes Hotel Supply. 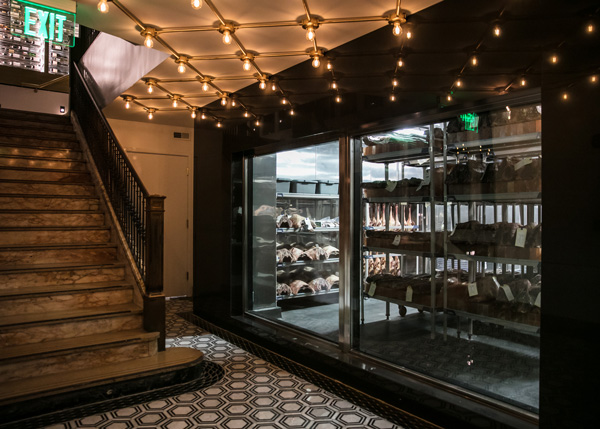 According to Joel Shultz, design division lead with Great Lakes Culinary Design, one of the key goals of the project was to showcase the work that goes into the restaurant’s meats.

It starts with the dry-aging cooler. Instead of hiding this in the back of the house, the cooler is located downstairs, next to the staircase that leads to the restrooms. “We purposely put it down there so you have to walk around the dry-aging cooler to get the restroom area,” says Schultz. To give a clear view of the aging process, two walls of the cooler have been built with “the largest glass we could find.”

In addition to showing off the quality of its food, the area around the cooler has many old-school steakhouse touches. The flooring is made with a hex tile, for example, while brass accent can be found on the staircase and the grid-style Edison bulb light fixture overhead. 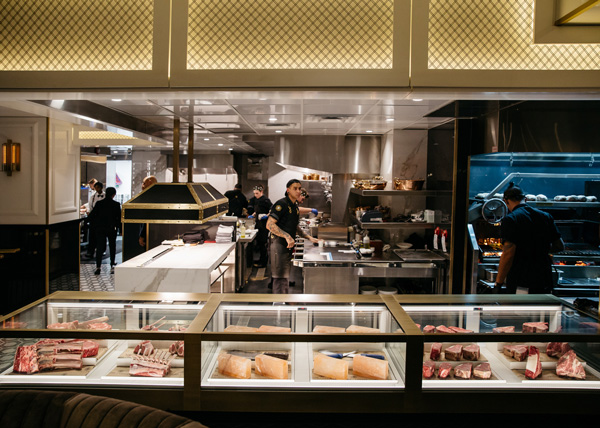 This approach continues upstairs with the operation’s meat display case, a custom-made unit trimmed in brass contributing to the restaurant’s vintage vibe. Guests who stop by the case can get an education on the aging process and different cuts of meat. They can even order cuts to take home, which are wrapped in branded butcher paper and tied with twine. 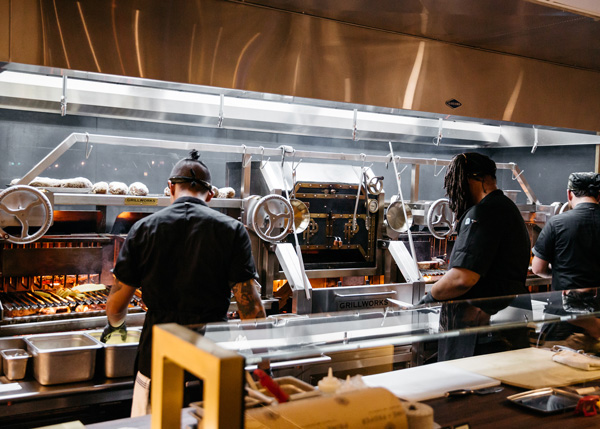 In keeping with the goal of showing off its food, the meat display case is just one part of the restaurant’s open kitchen. The showpiece of this kitchen is a custom-made artisanal grill.

The grill is functional, but it’s also been given plenty of form. The wheels that raise and lower the grill plates are slightly stylized, while the smoker box in the center of the grill is adorned with Prime & Proper’s logo.

While a marbled white stone was used in other spots of the restaurant, the grill itself is backed up against a wall covered with black stone. The black was sourced because it doesn’t distract from the grill like white would, says Schultz, and it won’t be easily charred or discolored by the flames and high heat. 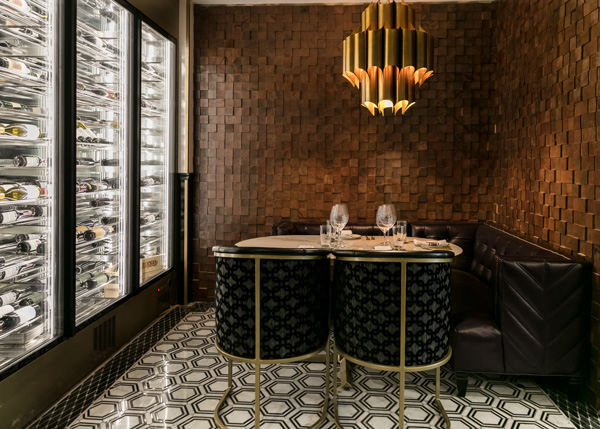 For guests who want a high-touch experience, Prime & Proper offers a chef’s table just off the kitchen. “You can interact with the chef and sample the things that they’re preparing,” says Schultz. “It’s really good for somebody who likes to see the whole nuts and bolts of the operation.”

The space features a table with leather booth seating and chairs along with a light fixture sourced by the restaurant’s owner. The wall is tiled with wood pieces cut on-site by the project’s millworker. 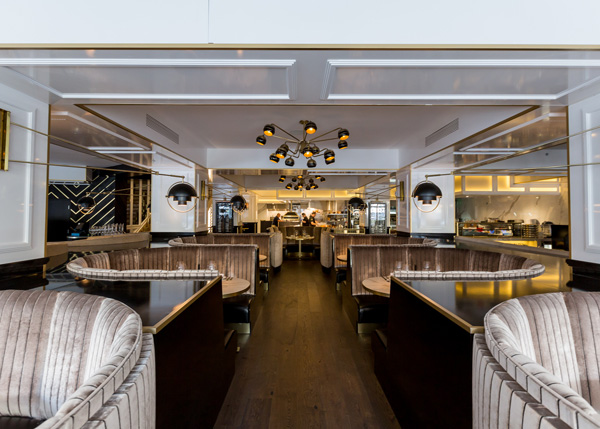 Seating in this area offers a mix of banquettes and rounded booths but no floating tables. The banquettes, upholstered with a heavy-duty fabric, provide the restaurant with flexible seating for larger parties while the booths offer a sense of privacy, says Schultz. 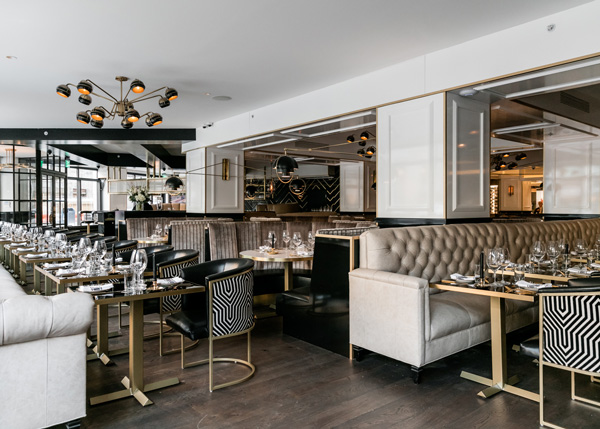 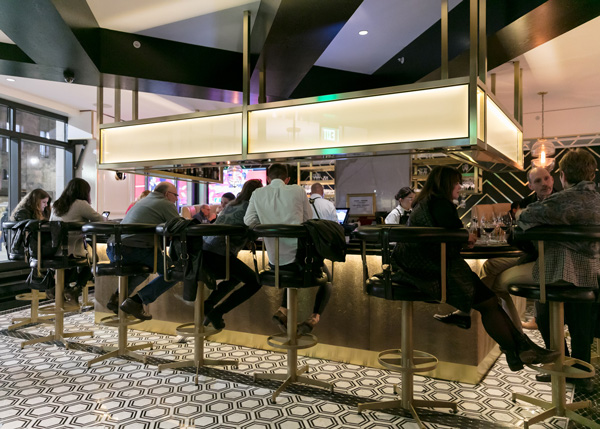 Perhaps more than in any other space, old and new come together in Prime & Proper’s bar. Once again, the space is floored with hexagonal tile, while brass can be found throughout, including on the bar stool frames, the bar face and the shelving above the bar.

This shelving is used to give the space a clean look, says Schultz. “We didn’t want to do the typical display with all the bottles. We did a simple soft backlight, some opaque glass and made it go away. It’s a cool feature and it’s not a billboard for liquor.”

The space’s modern touches can be seen in some of its more angular elements. One wall, for instance, features a black and white diamond pattern, while structural elements on the ceiling were painted black, turning them from an engineering necessity to a design feature.